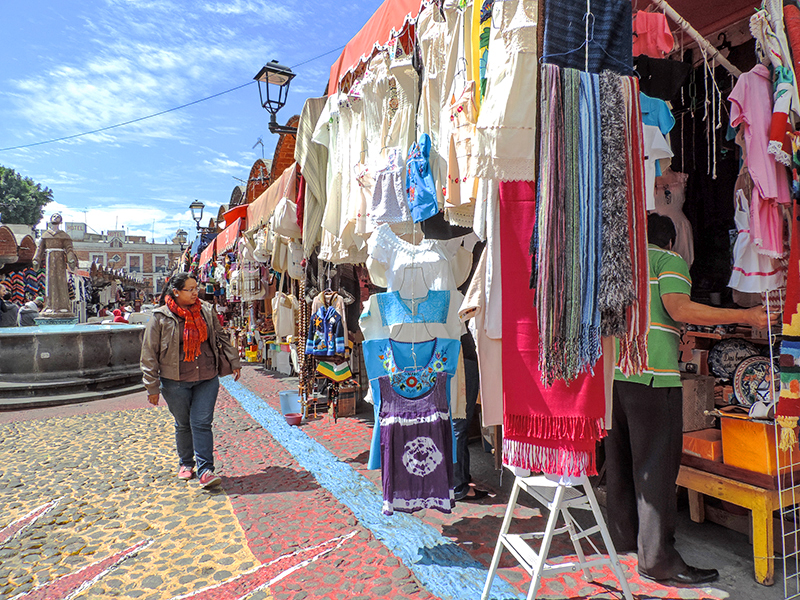 The Artist Market in Puebla, one of the places to visit in Puebla

I hadn’t expected Puebla, Mexico, to be so different, or so picturesque, or have so many things to see. 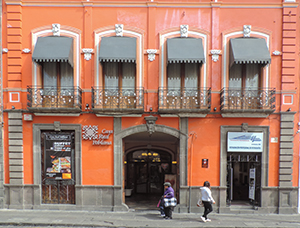 Visit this colonial city, a little more than a two-hour-drive from Mexico City, and you’ll find the Spanish colonial influence everywhere. Most evident is the profusion of beautiful Talavera tiles covering buildings, walls, and domes everywhere, and the grid pattern of the streets laid out by the colonialists, the first in Mexico.

Surprisingly, among the many things to see in the city, you also find a bit of a French ambiance. It’s hinted at by the numerous wrought-iron balconies all around the old city center, married to buildings built when the French occupied the city in the 19th century.

The French didn’t stay long, and their defeat in the Battle of Puebla in 1862 is still immortalized by Mexico’s famous Cinco de Mayo holiday, something most people, including myself, never realized. 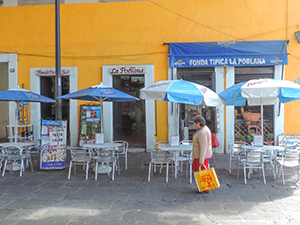 A small restaurant in the old city

Since I only had a day free to travel outside of Mexico City, I hired a driver for the two-hour drive to Puebla. Our first stop on arrival was near the main city park, the Zócalo facing the cathedral, where we asked a police officer where we could find the tourist office. She told us the main office was right across the street and suggested we’d probably find a parking spot right alongside the park.

We found the parking space fairly quickly but, somewhat amazingly, didn’t find any English-language brochures in the tourist office. That didn’t daunt me, however, since my driver Miguel knew the city well. And he turned out to be a very good guide.

Miguel quickly whisked me out of the tourist office and took me over two blocks to Calle 5 de Mayo. There we walked up a few blocks to the 17th-century Iglesia Santo Domingo. 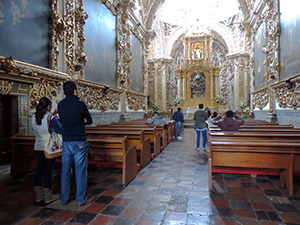 En route Miguel told me I must see the Capilla del Rosario in the church, one of the most highly decorated chapels in all of Mexico. All along the way he was clearly excited about where we were going and when we arrived, I understood why. It’s a place you don’t want to miss in Puebla.

The church was an incredible place, with an elaborate Baroque chapel covered with intricate gilt carvings all about its interior. Golden vines snaked all over the walls, finally forming the frames of six large paintings. Up above in the ornate dome were a multitude of gilded cherubs and saints. I’d not seen anything like it anywhere in Mexico.

A Rainbow of Buildings 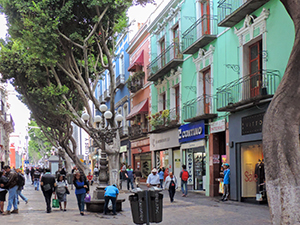 A rainbow of buildings in teh old city

After a half hour of exploration, we left the church and walked through the center of Puebla’s old colonial city. The streets were beautiful, many a rainbow of pastel-colored buildings with multiple balconies hanging from their facades.

Closer to the Zócalo, old European-style shopping arcades with skylights brightening their interiors hid numerous shops. People walked along the beautiful colonnades past shoeshine men and the occasional newsstand.

In some areas, buildings were adorned with beautiful tiles that were a riot of white and green, black, yellow and blue, colors so characteristic of Talavera design. I was amazed by the profusion of color everywhere I looked. 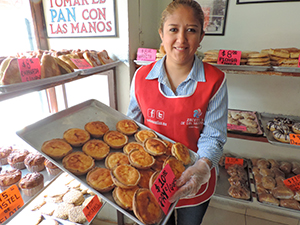 We soon stopped for a late-morning snack of cheese-filled pastries and coffee. In the little bakery, there was a four-foot tall statue of the Virgin behind the counter, with a bouquet of flowers and votive candles at her feet.

Next to her was a sign advertising Tamales, and by the cash register another, this one obviously handmade, saying “Exquisito Mole-m-m-m.”

Although debate continues whether Puebla or Oaxaca has the best mole in Mexico, it’s generally agreed that the famous Mexican National dish was popularized in Puebla.

Off To Puebla’s Artist and Antique Markets 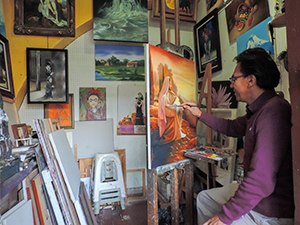 An artist in the old market

For the next few hours, Miguel took me all around the city, visiting different churches and various markets. One of the most interesting was the Artisans Market, where I found Americans and Europeans wandering through the little shops. The market began in an area of little galleries in which local painters were at work on their canvases, before morphing into handicraft shops over the next several blocks.

I soon realized, however, that it was two markets; the northern end an artist and handicraft market, the southern an antique market. With such a wealth of antiques for sale, and always hoping to come upon some treasure, I wandered through almost every store we passed.

Small Restaurants and A Large Cathedral

Walking along Puebla’s quiet pedestrian-only streets, we passed many little restaurants along the way. They were mostly small one-room places where women cooked quesadillas, tamales, and tortillas at the open front of the restaurant while the patrons sat behind them. 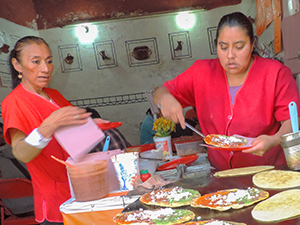 A restaurant in the old city

Before returning to our car, we walked over to the 17th-century Cathedral, a mix of Baroque and Renaissance styles. It’s the second largest in Mexico after the cathedral in Mexico City, with an interior encircled by 14 small chapels.

Before entering, however, I was drawn to the high wrought-iron fence that surrounded it. The posts of the fence, as well as the streetlight poles around the church, were all capped with small statues of angels. It was obviously a nod to the full name of the town, Puebla de los Angeles, which roughly translated means “the people” or “place of the angels.”

Somehow they seemed a more poignant symbol of the city, than the soaring buttresses of the Cathedral they guarded.