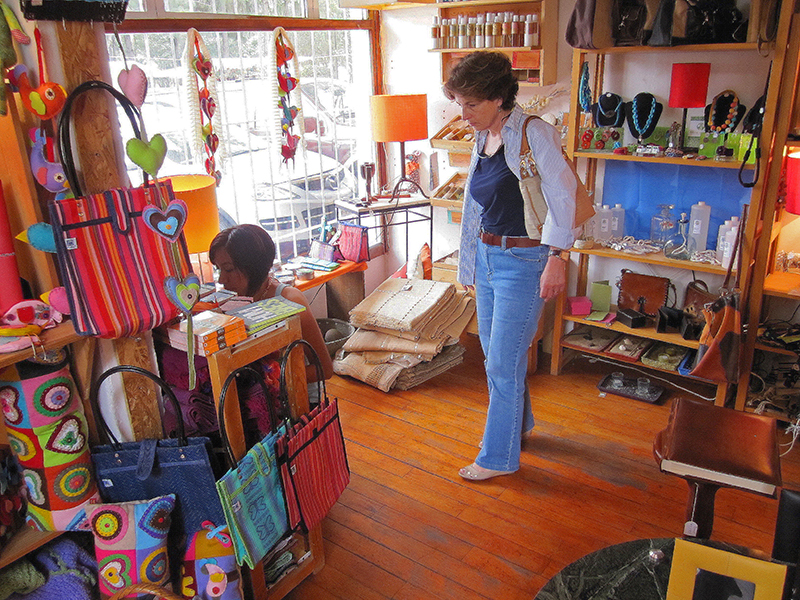 Mexico is perennially one of the most popular destinations among North American travelers. But too many head only for the beaches, though, and bypass Mexico City, one of the top cities in North America. It’s the oldest capital in the New World and the former capital of the Aztec Empire. There’s a lot to see and do.

Mexico City seems always to be on the verge of bursting at the seams.

It’s huge, overpopulated, has more traffic than one can imagine, and is often capped with a haze of smog that blocks one’s view of beautiful Popocatépetl, a volcano about 70 miles south of the city, which recently erupted again. 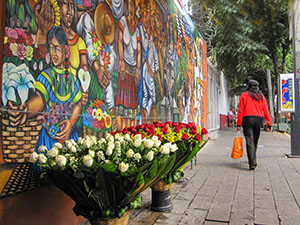 Despite it all, like Mexico itself, it continues to draw millions of travelers from all over the world. While the value of the dollar vs. the peso certainly entices some of them, the draw for many is the city’s feast of visual and sensual elements, some quite incongruous, that make it a never-ending show that delights and intrigues.

It’s a bouillabaisse of cultures – architecture that’s a mix of colonial and modern, restaurants that serve Aztec-inspired and modern cuisines, sidewalks that are shared by indigenous shamans and blue-suited bankers. Stroll through its center and you walk a timeline through ancient and modern Mexico.

For the first-time visitor, the sheer vastness of Mexico City can be overwhelming. To make things a bit easier, here are the top 10 things to put on your must-see list.

In the several times I had been to Mexico City I had never visited the Museum of Anthropology. Then one day I decided to visit and was astounded by beautiful and educational exhibits of Mexico’s pre-Colombian cultures. 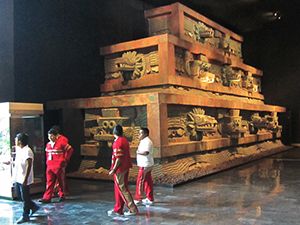 The National Museum of Anthropology

It houses an astonishing collection of artifacts from all over the country that you won’t see anywhere else, ranging from a large statue of a rain deity to a funerary mask covered with jade, turquoise and shell, and the largest collection of Aztec treasures anywhere.

Even if you’re not interested in archeological artifacts, you’ll likely enjoy it since it will open your eyes to the Aztec culture thousands of years ago.

Don’t miss this place if you’re in Mexico City, and leave yourself, at least, half a day to wander through it. 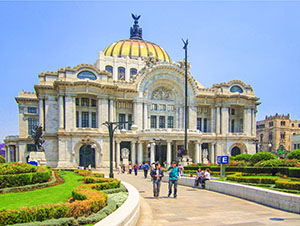 The Palacio de Bellas Artes is a beautiful Art Nouveau building in the Alameda Central in the historic center of Mexico City. It’s home to a beautiful theater with an Art Deco interior; its curtain is a glass mosaic designed by Tiffany Studios of New York. It is one of the focal points of the city.

The Alameda Central is a beautiful park whose name is derived from the Spanish word for the poplar trees that were planted there in the 16th century. As might be expected, there are many statues and monuments scattered throughout it, and on weekends it’s often filled with families enjoying everything from mariachis to organ grinders. 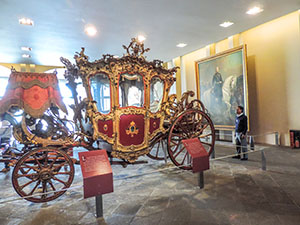 The carriage room in Chapultepec Castle

High on a hill once considered sacred by the Aztecs, above the city’s famous Chapultepec Park, is Chapultepec Castle. During its relatively short life span, it has been a military academy, an observatory and the only royal castle in North America in which a sovereign actually lived (that would be Mexican Emperor Maximilian I).

In its latest iteration, it houses Mexico’s National Museum of History, which contains numerous exhibits from the Conquest of Mexico to the Mexican Revolution, including such diverse items as Benito Juárez’s eye glasses and the rifles used in the execution of Maximilian. What draws most people here are its beautiful salons and murals, and wonderful views out over the city.

Whatever you do, be sure to visit some of the city’s beautiful neighborhoods or Colonias, such as Polanco, San Ángel, Roma, and Coyoacán, each of which is unique. 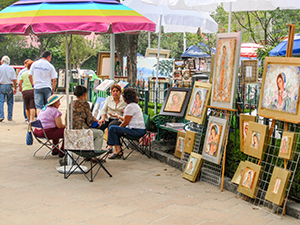 An art market in San Angel

Although they are primarily residential areas, all are filled with restaurants, shops, and the occasional outdoor market. I especially enjoy San Ángel and Coyoacán, two of the most famous, loveliest, and tranquil.

San Ángel was originally a Spanish colonial city and it still retains its Spanish Colonial feel in both its architecture and the layout of its neighborhood. Visit, among other places, the Museo Estudio Diego Rivera, the studio museum of Mexico’s great muralist.

In Coyoacán you’ll find the home in which León Trotsky lived in exile, and where he was assassinated, now the Casa/Museo León Trotsky. Just blocks away is the delightful the Museo Frida Kahlo.

Frida Kahlo Museum, Home of One of Mexico’s Famous Painters 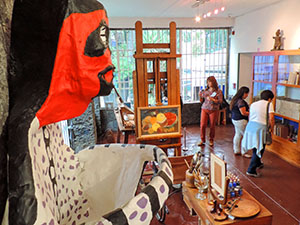 A room in the Frida Kahlo Museum

Many art lovers make a pilgrimage to Colonia Coyoacán to visit the home of Frida Kahlo, one of Mexico’s most famous painters.

Kahlo was born in the house, lived in it for much of her life (and shared it with her husband Diego Rivera), and eventually died in it. It was here she painted many of her works.

It’s a wonderful and colorful little museum, both inside and out, that contains both her art as well as items associated with her life and that of Rivera, as well. Go early as the line can get long later in the day. 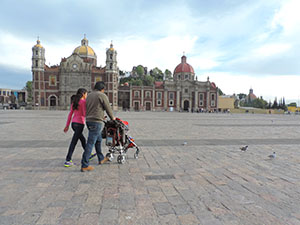 On the northern side of the city, the famous Basilica de Santa Maria de Guadalupe is the most popular place of worship of Mexico’s patron saint.

It was originally built in the early 18th century on the site of a previous shrine where it is said in 1531 a poor Indian saw a vision of the Virgin Mary. Today it remains one of the most important religious sites for Catholics.

A more modern church, designed by the architect who designed the Museo Nacional de Antropología, and capable of seating more than 40,000 worshipers, was built adjacent to it in the 1970s. 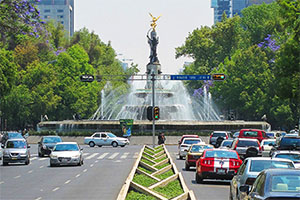 Despite the almost claustrophobic sea of autos and taxis in Mexico City, Paseo de la Reforma remains one of the most beautiful urban thoroughfares in the world. Surprisingly, it is a ribbon of serenity, its calmness nurtured by extensive green areas and the beautiful monuments you find along its length.

The nicest parts of the boulevard start where it winds its way out of Chapultepec Park into downtown. Start near Torre Mayor, the tallest skyscraper in Latin America, where Reforma doglegs northeast and makes a straight run towards the center of the city. This two-mile stretch remains the most famous and beautiful part of the avenue.

The Zócalo, or the Plaza de la Constitución, as it’s officially known, is one of the largest public squares in the world. 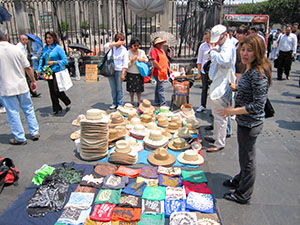 Vendors in the Zocalo in front of the Cathedral

It’s the heart of Mexico City, both the new and the old, and where you’ll find the National Palace in addition to two important religious buildings – the Metropolitan Cathedral and the Temple Mayor.

Walk through the area between the cathedral and the temple and you’ll find it colorful and almost circus-like with indigenous peoples dressed in Aztec garb, shamans dancing about performing rituals and vendors hawking just about everything imaginable. The sound of pounding drums often adds to the cacophony. 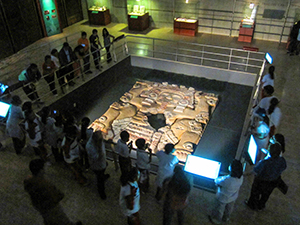 Exhibit in the Temple Mayor

In a corner of the crowded Zocalo, you’ll find the Temple Mayor, a great temple constructed in the 14th-15th centuries. It was the most important religious building of the ancient Aztecs, and was destroyed by the Spanish following their conquest.

Amazingly, it was discovered only by accident beneath the Plaza in 1978 and today it is still an active archeological site.

Be sure to visit its fascinating museum, which provides insights into the Aztec culture. 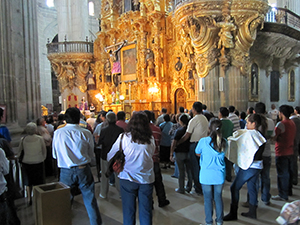 Mexico City’s Metropolitan Cathedral is the largest church in Latin America. It’s so huge and architecturally diverse it took nearly three centuries to complete. The center of the largest Catholic diocese in the world, its beautiful interior contains five altars and 16 chapels as well as a wealth of paintings, sculpture, furniture, and religious artifacts.

It’s an exceptionally intriguing cathedral since its style incorporates Classical, Baroque, Churrigueresque, and Neo-Classical elements both in its architecture and decoration. It can get quite crowded on religious holidays, but it’s fascinating at any time.