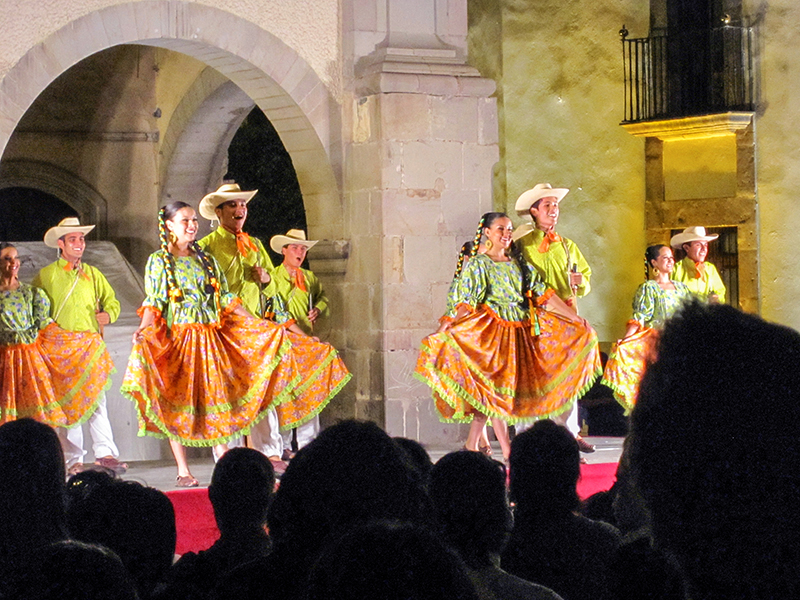 The Ballet Folklorico in Queretaro, an easy day trip from Mexico City

I always enjoy wandering around Mexico City whenever I’m in Mexico.

In fact, each time I visit I always discover some little nugget of something new to do or experience.

An antique store in Puebla

Mexico City is so large, and sits upon so many centuries of culture; one can always find something of interest.

From Chapultepec Castle to its colonial neighborhoods, the Frida Kahlo Museum to the Museum of Anthropology, Reforma to the Zócalo and beyond, I discover things that intrigue me in umpteen museums and galleries, bars and restaurants, historic churches and historic neighborhoods spread all about the sprawling metropolis.

Still, as in any large metropolis so vast and crowded, Mexico City can feel overwhelming at times. Come that time, and perhaps you need a day trip from Mexico City to decompress.

You’ll find plenty of places to visit outside Mexico City. Here are five of the best – all of which provide great moments of discovery and delight. 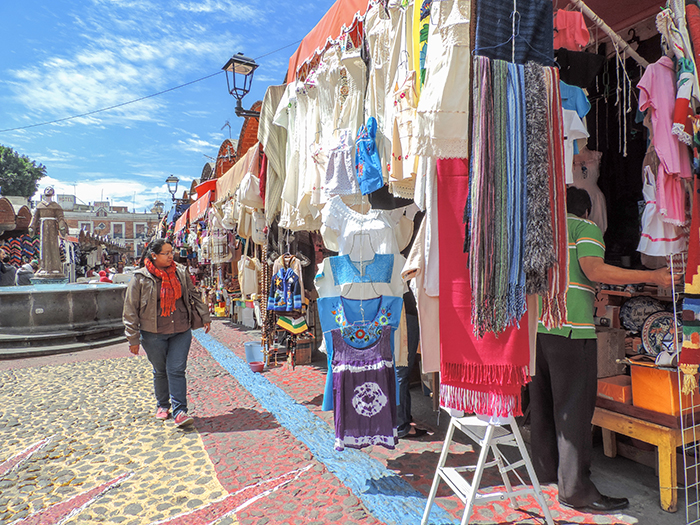 Puebla is a great day trip from Mexico City, only about a 2½ –hour drive southeast. When I visited, it surprised me to find it is so different from Mexico City and so picturesque.

Puebla oozes Spanish colonial influence everywhere. Most evident is the profusion of beautiful Talavera tiles covering its buildings, walls, and domes everywhere. Its streets are also set in a grid pattern, the first so done in Mexico by the colonialists.

Surprisingly, you also find a lot of a French ambiance in Puebla, as well. It’s most evident in the many wrought-iron balconies all around the old city center. Most hang off buildings built when the French occupied the city in the 19th century.

The French didn’t stay long, and their defeat at the Battle of Puebla in 1862 is still immortalized by Mexico’s celebrated Cinco de Mayo holiday, something most people, including myself, never realized. 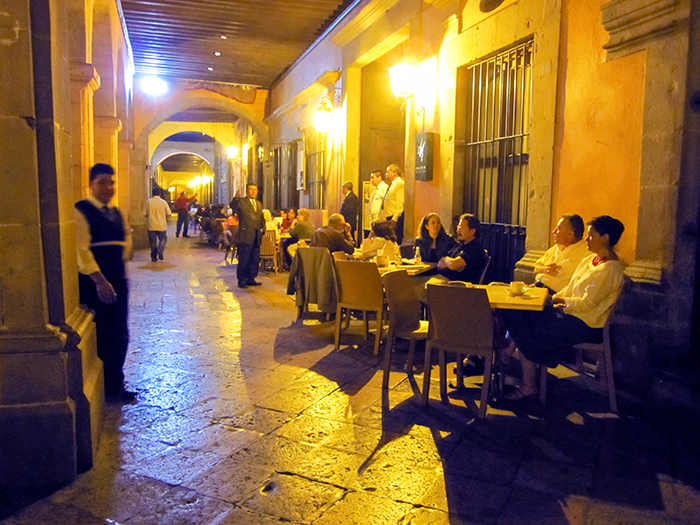 A restaurant in the historic center of Queretaro

When you first see the modern, bland architecture of Queretaro, you’ll likely wonder what the fuss is all about. After all, very little looks the least bit colonial. But keep driving; you’ll be captivated by the  old colonial center. It’s this center that makes it a great day-trip from Mexico City.

It’s a UNESCO world heritage city and just reeks with history. It was once a wealthy and prominent town in the territory of New Spain. Later, briefly, in the mid-19th century, it was even designated the capital of Mexico by invading US troops.

Today, you’ll find the center picture-perfect, with bougainvillea cascading down white-washed walls on the blocks surrounding Plaza de Armas. In addition, throughout the beautiful and charming old center, there are beautiful churches and nunneries and interesting museums. If you’re lucky, on a Friday night you may even find the Ballet Folklórico performing in the plaza. 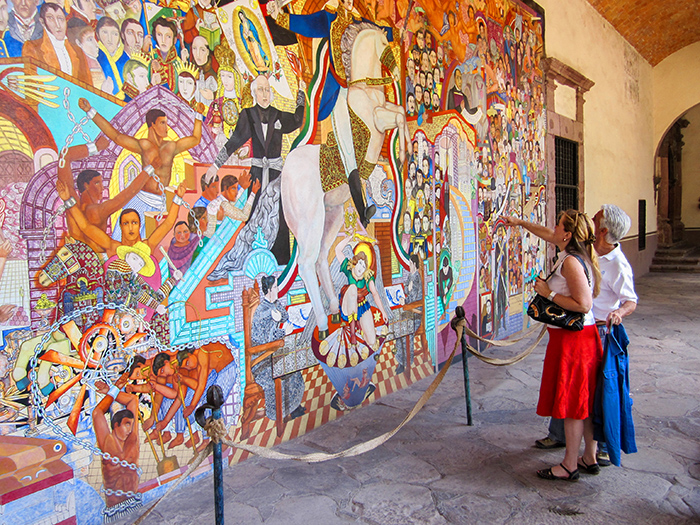 San Miguel de Allende, about an hour beyond Queretaro, is also a great day trip from Mexico City. It’s also home to a large expat population of Americans and Canadians. The city’s climate, culture, solitude, and beauty, draw many of them.

Early in the morning the day after I arrived, the beauty of San Miguel drew me in, as well. I set out at 7:30 am and had the town to myself, save a shopkeeper or two out sweeping the entrance to his little store. The morning light mesmerized me as it swept across the small town square with its park and church. The city seduced me as the changing morning light danced on the multi-colored walls all around me.

Later I walked through a little-manicured park and stopped to view paintings for sale by San Miguel artists. Many of them are expats, I later learned, and donate their earnings to local charities. Continuing onto the streets on the park’s periphery, I admired the city’s old grand mansions, many now enjoying a second life as hotels and B&Bs.

In the afternoon, when walking the city’s winding, narrow cobblestone streets, I could often see the hills surrounding San Miguel. Purple-crowned Jacaranda trees speckled them, looking live a scene in a painting. Just as if one of the painters had daubed splashes of purple all over a beautiful urban canvas. 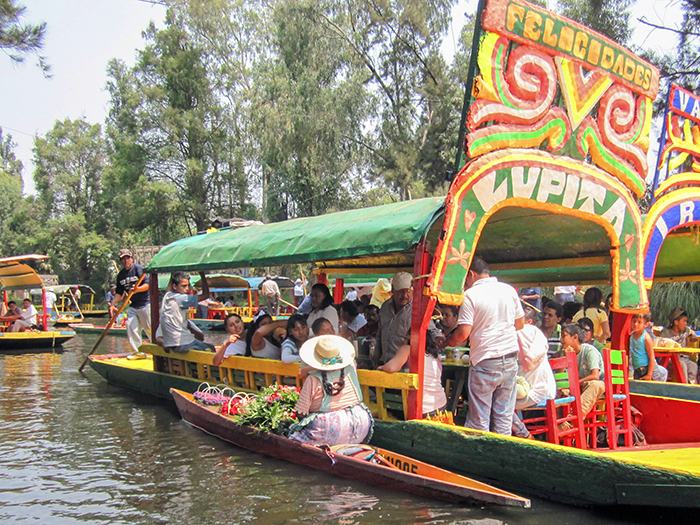 Xochimilco (“so-chee-mil-co”), nicknamed Mexico City’s “Little Venice,” is about an hour’s drive south of the capital. This is a great day trip from the capital since it is so close as well as so entertaining.

A series of canals on which you are punted about on boats, it’s the only remaining lake remnant of Mexico’s old Aztec Empire. Yes, with its gaudy, Crayola-colored boats and mariachi music et al, it’s a touristy place, but it’s also unique. Whether they’re Mexicans or tourists, most who come here find it a great place to relax for a day.

At any rate, many of the boats will amaze you. Some have little stoves on them, with women cooking hot tortillas on the spot while their husbands punt them about. Others peddled soft drinks, popcorn and candied apples. There were also music boats, with mariachis and marimba musicians serenading the partyers. None push themselves on you, but just slide silently by waiting for you to call them over.

By and large, as the day goes by the entire waterway becomes a floating fiesta. However, with the sound of birds and marimba music in the distance, it’s both relaxing, and somewhat surreal. 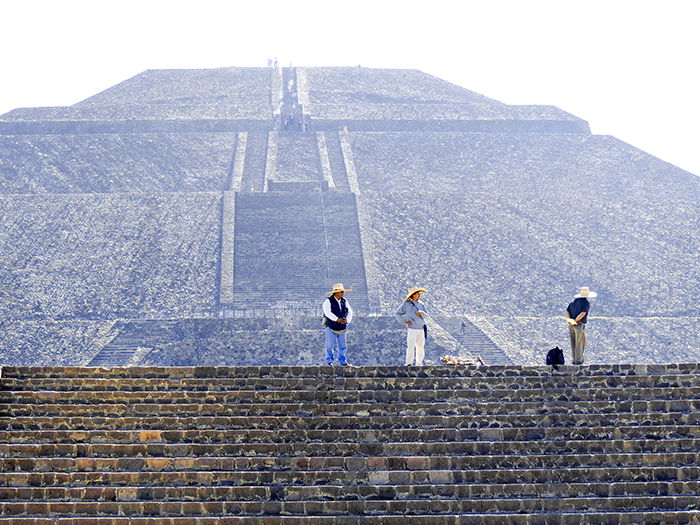 Vendors on the steps of the Temple of the Sun, Teotihuacán

Teotihuacán – meaning “the place where men become gods” – is one of the most awe-inspiring places of the ancient world. It’s a bit over an hour’s drive northeast of Mexico City, which like Xochimilco, makes it a great day trip from Mexico City due to its proximity to the capital.

Actually, the main site you see today is only part of the original area of the city. The ancient city once covered an area of eight square miles and was home to more than 125,000. Before it was destroyed about 650 AD,  it dominated the region for five centuries. Even so, its destruction remains a mystery.

Much of the area is barren, with cacti jutting up from a landscape burnt beige a torrid tropical sun. With the huge stone buildings looming up from the bareness, the visual impact is striking. Its Pyramid of the Sun, for example, is one of the largest pyramids in the world. (It’s base is the same size as the Great Pyramid of Egypt, but it is only half as high.)

If you enjoy ancient sites, you’ll likely find Teotihuacán quite interesting. Be forewarned, however, that there are long walks across rocky ground to see the buildings that are spread out. And the steps up the buildings are steep and high. You don’t want to rush about, or the 7,550 foot altitude and tropical sun will take their toll. Above all else, be sure to bring a hat, sunscreen and comfortable shoes.