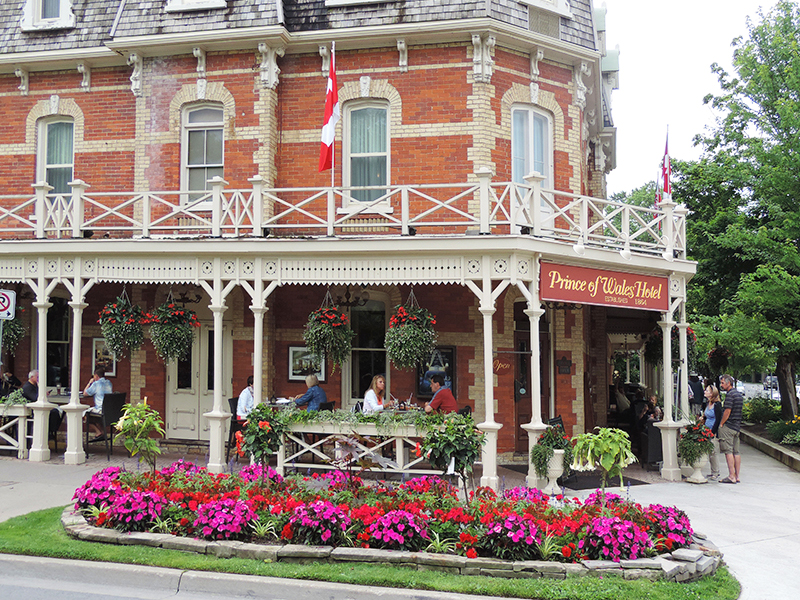 The Prince of Wales Hotel in Niagara-on-the-Lake

As a Canadian living just outside Toronto, there is plenty for me to enjoy on both sides of the border.

One example, just down the road from me, is the Niagara Region of Ontario, Canada. It’s a great and beautiful place filled with plenty of things to see and do. 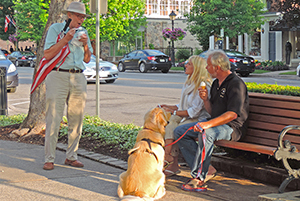 Quite frankly, though, I seem to be taking it for granted, even though it’s only about an hour’s drive away.

I guess it’s the same for all of us. We don’t often visit places close to home until visiting friends or relatives nudge us to explore it with them. Which is why I returned there after a too-long absence.

Niagara, on both sides of the river, is a place of beauty, wonder and romance, especially the spectacular Niagara Falls. In the early to mid-20th century, couples from all over North America made the Niagara Region the honeymoon capital of the continent. The honeymooners still come but it’s the Casinos on both sides of the border that now vie for their interest.

For me, however, a richer experience for all can be found downriver on the Canadian side of Niagara, especially in Niagara-on-the-Lake. 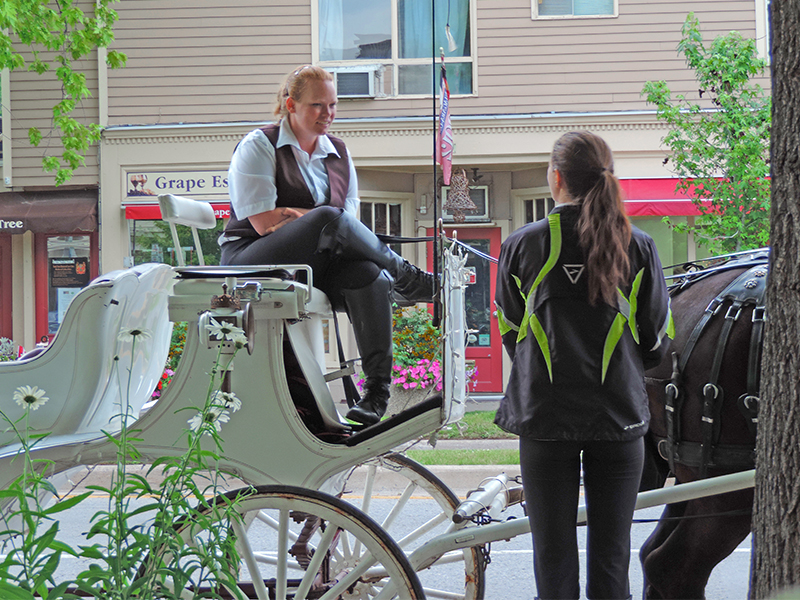 About 15 miles down the Niagara River, where it empties into Lake Ontario, sits the quaint historic town of Niagara-on-the-Lake. Known locally as NOTL, it was first settled by Loyalists fleeing America during the Revolution. It later became an important terminus of the Underground Railroad. In fact, at one time it had a thriving, industrious Black population.

In the mid-1800s it was renowned for shipbuilding, and many elegant steamers slid down the ways here. At the turn of the century it was a flourishing town catering to tourists from both sides of the border. Unfortunately, the subsequent Great Depression and World War II were the death knell for its tourism business.

Although tourism died, what lived on were the magnificent houses and commercial buildings of Niagara-on-the-Lake. Today they remain one of the finest collections of architectural styles of the mid-19th century in North America. The entire town is a National Historic Site of Canada. 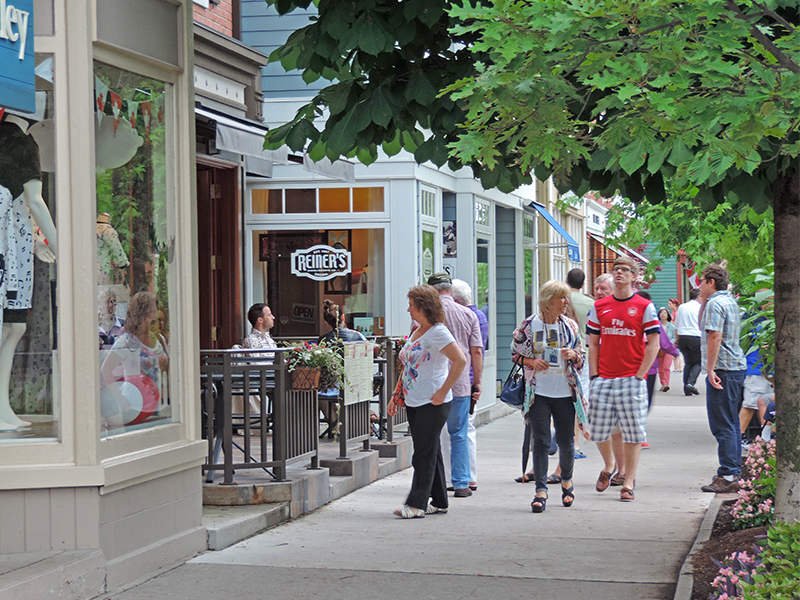 NOTL has more than its fair share of Old-World Charm, all well laid out on a proper grid plan. Many of its historic buildings are in the popular Heritage District, a showcase of old shops and B&Bs. It’s always a pleasure to stroll there, dropping into numerous boutiques and shops, while outside the occasional horse drawn carriage vies with automobiles on the tree- and flower-lined streets. 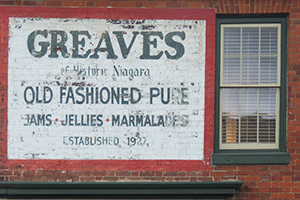 It’s not only the architecture that draws visitors here, but the shopping as well. On Queen Street, the main thoroughfare, taste buds find enchantment at scores of places including Greaves Jams and Marmalades, OLiV Tasting Room, Maple Leaf Fudge, and the Olde Tyme Candy Shoppe.

As you might expect, you’ll find many boutiques in Niagara-on-the-Lake that also wave their ancestral flags. Visit Irish Design at 75 Queen Street, right near The Viking Shop at #76, and the Scottish Loft a bit further down at #13. You even find a soupçon of Paris on the lake at Serendipty: The Little French Shop, at 106C. Another popular shop is the BeauChapeau Hat Shop at 42 Queen.

Stop in the Niagara Apothecary at #5, a museum restoration of a pharmacy that operated in NOTL for 144 years. The shop is now a National Historic Site of Canada. Pay it a visit, then head to 100+-year-old Taylors Bakery and Ice Cream (# 69 Queen) for a refreshing pause. Along the way you’ll pass perennially popular Just Christmas, that does a brisk business even on a hot summer day.

All about you’ll find an abundance of delicious restaurants and cafes in which to recharge and relax. There’s also an abundance of hotels, B&Bs, and inns, including many four- and five-star properties. 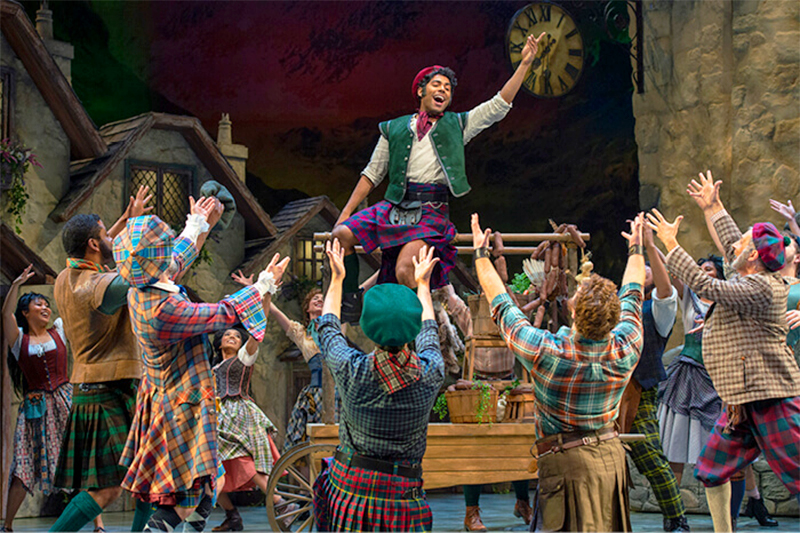 Niagara-on-the-Lake is also an important – and very popular – theater venue.

From April through December each year the Shaw Festival produces and presents the work of George Bernard Shaw and other playwrights writing during, or about, the era of Shaw’s lifetime.

The center of town is home to three theaters: Festival Theatre, Royal George Theatre, and Jackie Maxwell Studio Theatre. Every season more than ten festival productions are performed in the trio, attracting an audience of 250,000+. The popular productions are world-class and the prices reasonable, with some selling out early.

This season’s performances include Brigadoon, The Ladykillers, Man and Superman, Getting Married, and nine other popular productions. The 2020 season will herald Gypsy, Assassins, Desire Under the Elms, and a score of others. 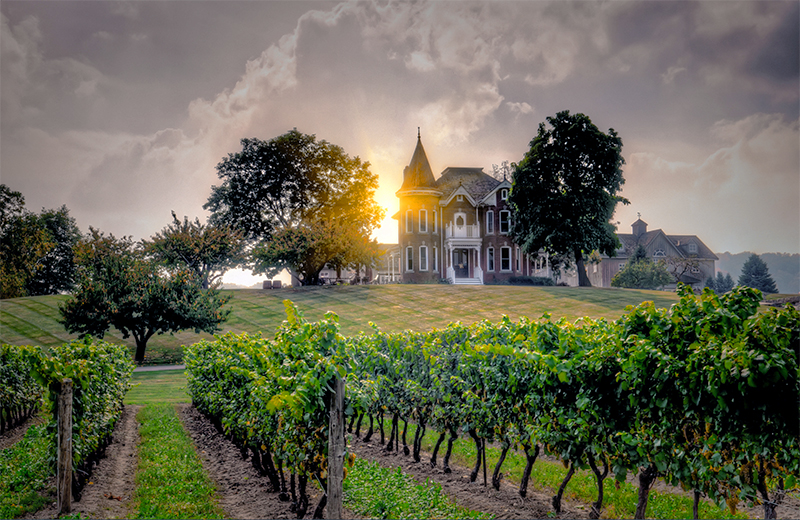 A winery in the Niagara Region / photo: The Peninsula Ridge Estates Winery

As in European vineyards, NOTL’s lakeside climate also permits the growing of grapes. The region, in fact, is home to more than three-dozen wineries, most with award-winning vintages in additional to international accolades. One of the most popular is Niagara’s world-famous Ice Wine, a dessert wine made from frozen grapes.

As one might expect, Niagara-on-the-Lake Wineries offer tours. While summer and fall are the busiest tour seasons, tours are offered year-round.

Special events at Niagara-on-the-Lake wineries also draw crowds. One of the most popular is the January Ice Wine Festival that celebrates this distinctly Canadian treat.

There are many things to do and see in the Niagara Region on both sides of the border, but should you feel the need to find a more cosmopolitan experience on the northern side, Toronto is just an hour away.

It’s unfortunate that I probably take it for granted too.