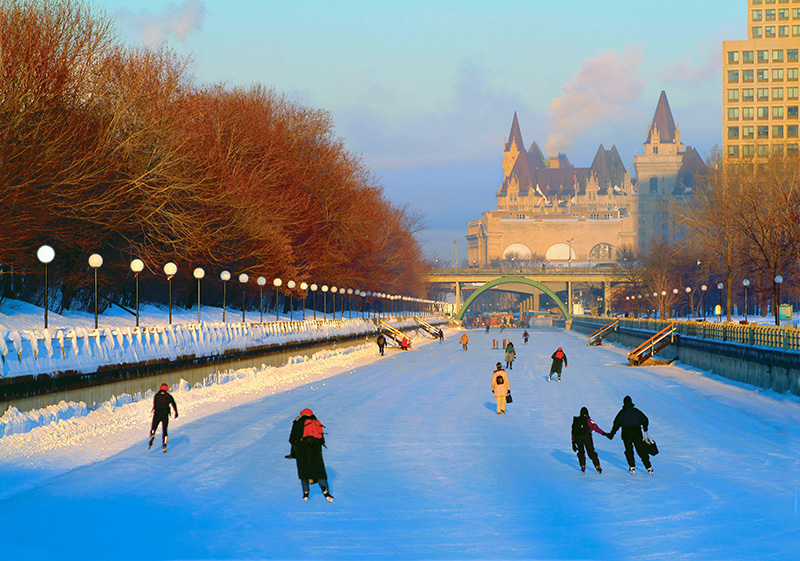 Ottawa’s Rideau Canal, site of one of the great Canada winter festivals

Many of us take winter vacations to escape the cold.

But there’s another side to this coin — seeking the cold for a unique vacation experience. I’m not referring to a ski or snowboard getaway to the mountains, or snowmobiling about a national park, but about an urban winter vacation where you can enjoy the cultural side of a city including great restaurants, museums and shopping.

You can, of course, experience this in many US cities — New York, Chicago, Boston and Minneapolis immediately come to mind — but to put some real panache on that winter getaway you’ve got to go where the temperature takes a real swan dive every January – Canada. And there you’ll discover some fascinating Canadian winter festivals.

Sans skis and snowboards, most of the winter action in Canada takes place in Ottawa, Montréal, Québec City and Winnipeg. Each has an unusual festival you’ll have a hard time experiencing anywhere else. 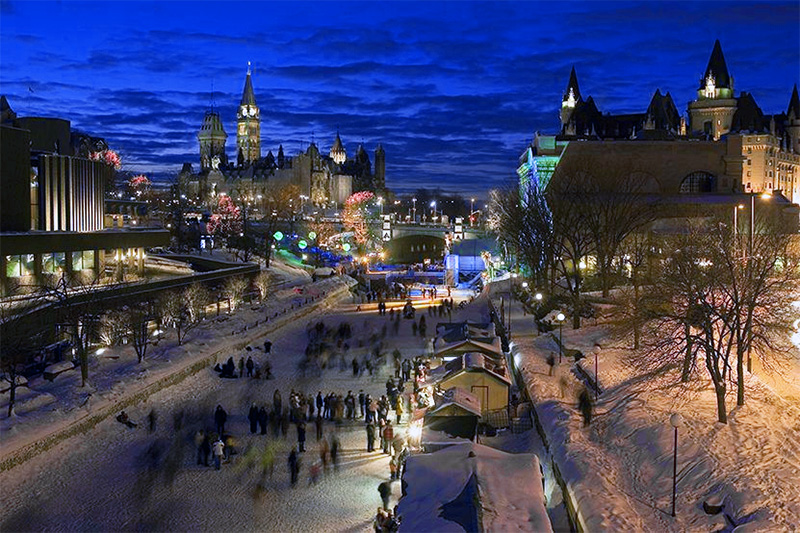 The Rideau Canal in Ottawa during Winterlude

During Ottawa’s three-weekend-long Winterlude Festival (January 31 to February 17, 2020), a great Canadian winter festival, you can go skating along the picturesque Rideau Canal through the city’s downtown. The canal is not only the largest outdoor skating rink in the world, according to the Guinness book of records, but also a UNESCO World Heritage Site. The “rink” usually opens in mid-January and remains open every day/all day until the big thaw finally comes.

A large number of people attack the Rideau during Winterlude, many starting their skate at the top of the rink in front of the Parliament buildings, and then make their way down past the Château Laurier hotel and the city’s old town. The old town is filled with galleries, museums and restaurants so even if you’re not a skater you can still feel as though you’re part of the action while you wander about with your credit card in hand. This Canadian winter festival includes such events as ice-sculpture competitions and other things you’d expect given the temperature. 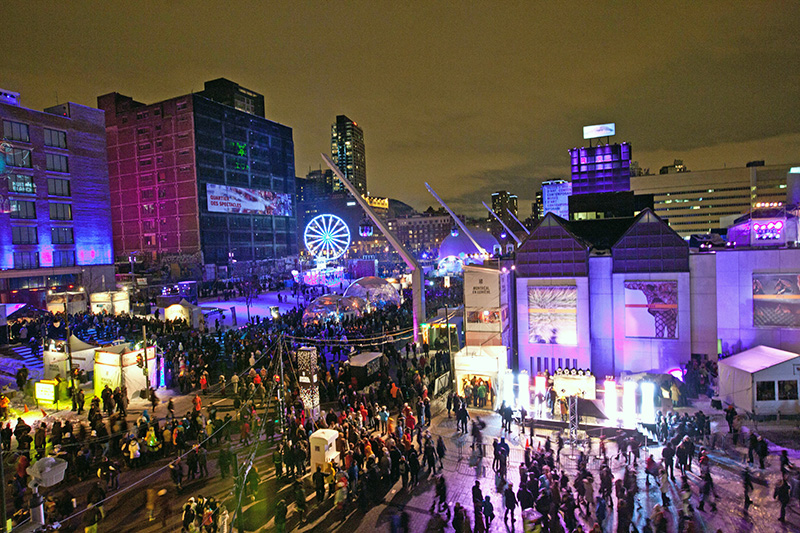 Further east in Montréal they party for 10 days during the Festival Montréal en Lumière, the city’s High Lights Festival, which brightens up the city during the darkest days of winter, in 2020 February 20 – March 1. One of the most popular Canadian winter festivals, it’s an extravaganza of food, drinks, music, art and sports, some 200 or so events and exhibits spread out across the city, many free.

The week’s agenda includes everything from midnight yoga sessions to a masked ball, an after-midnight museum tour by a flashlight, and country line dancing at City Hall. Free shuttles let you move from zone to zone without too much of a hassle.

It certainly can get cold but one of the great things about Montréal is its famous underground city, a huge heated network of underground streets, the Metro and numerous shopping areas, which gets you out of the cold whether you’re going just a few blocks or its entire 20-mile length. I’ve entered it from my hotel and was able to comfortably go to lots of places without setting foot on the streets above. It’s a good solution for making winter less of a challenge. 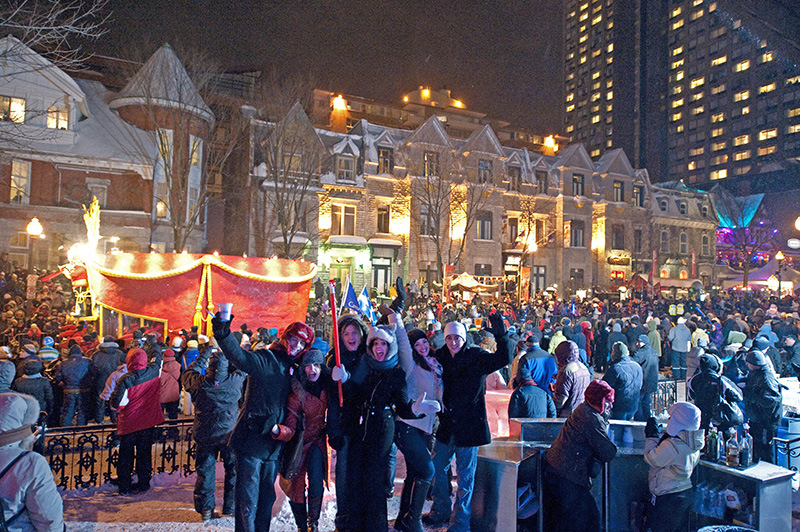 Carnaval de Québec, the Québec Winter Carnival, is over-the-top in terms of winter events. It is one of the most popular winter festivals in Canada.

This pre-Lenten bash is the biggest winter carnival in the world – think Mardi Gras on ice, to get a good sense of it. There are night parades, concerts, sleigh and dogsled rides, snow sculptures and many other activities, just about all of which are outdoors all over Old Québec. Dates for 2020 are February 7-16.

With a little planning in advance there are some good ways to beat the cold at this Canada winter festival. Spend some time in a museum, stroll about the beautiful and historic Château Frontenac (there are tours on weekends for fee) or go shopping. One good strategy is to make a dinner reservation at a restaurant along a parade route, although many of these reservations are taken well advance, sometimes months in advance. 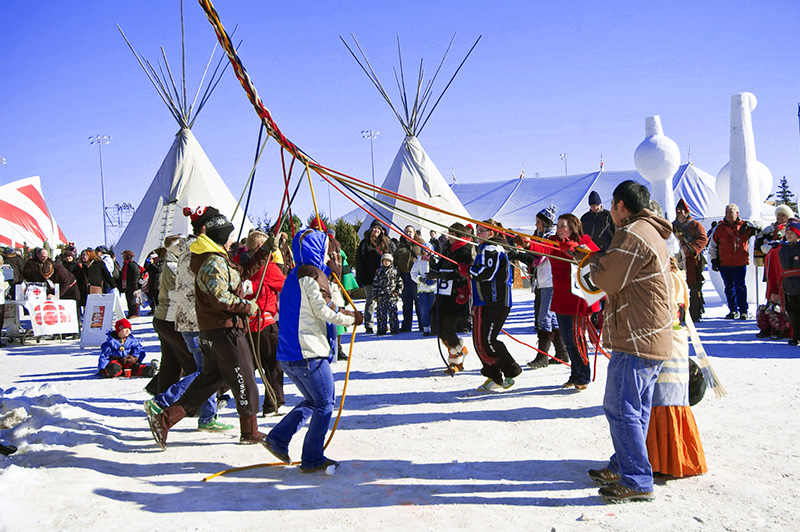 The Festival du Voyageur in Winnipeg

For 10 days it celebrates the region’s fur-trading past and French heritage (the word “Voyageurs” refers to the old fur traders who once traveled the area by canoe). The festival brings French Canadian, Aboriginal, and Métis culture to life every February. Métis are the cultural communities who trace their descent to First Nations and European settlers.

Expect snow sculptures, dog-sledding, skating, an abundance of food and drink, as well as such events and contests as a torchlight walk and beard-growing contest. Dates for the 2020 festival are ‎February 14–23.

Obviously, when you’re out at a Canadian winter festival in sub-zero temperatures – especially on a windy night — you’ve got to dress appropriately. Layer up is the rule. And consider your footwear, as well. In Old Quebec, where the Québec Winter Carnival takes place, the streets are quite hilly and steep.