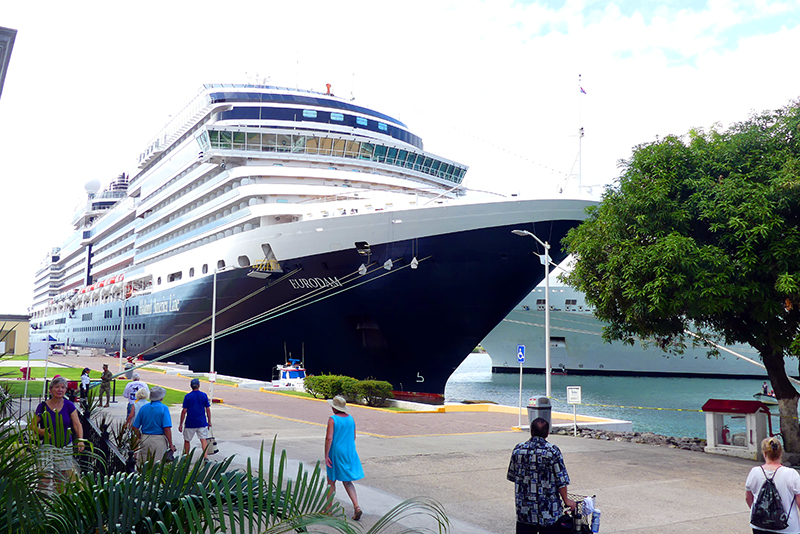 On a cruise from Vancouver to San Diego, the Eurodam in port in Puerto Vallarta / photos: John and Sandra Nowlan

“I guarantee you, we have the best live music at sea.”

A possible exaggeration from Rubin Kooiman, the genial Hotel Director of Holland America’s 2100 passenger cruise ship, Eurodam. But with 11 days ahead of us, we were looking forward to seeing if his boast was valid.

In recent years, Holland America has evolved its live music program on several older ships and its newest vessels, Koningsdam and Nieuw Statendam. The Music Walk is a series of Deck Two venues added to Eurodam in 2015 that run the gamut from hard rock to blues, from Top 40 to classical.

As on all large cruise ships, Eurodam, launched in 2008, has a main theater where a team of talented dancers present several different Broadway-style productions each cruise with dazzling special effects from the background light curtains. On our cruise from Vancouver to San Diego, with three stops in Mexico, we also had main stage solo acts, usually from singers and pianists, accompanied by a live band. 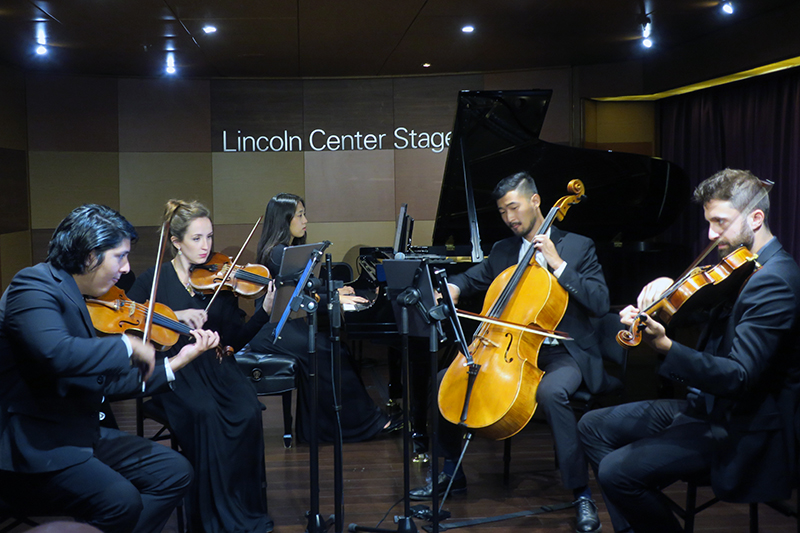 Lincoln Center Stage aboard the Eurodam

But the Music Walk is what sets Holland America apart. Every evening there were several choices for live music, always with a large, appreciative audience. The loudest was the BB King’s Blues Club with a full band and soloists belting standards from the Blues repertoire. Next door was Billboard Onboard, twin pianos played by a pair of singers who know the Billboard charts through the decades and can handle almost any request. On the two newest, slightly bigger HAL ships there’s an additional venue for the high-volume Rolling Stone Rock Room.

Our favorite Music Walk venue was the Lincoln Center Stage, located towards the stern of the ship, with two or more concerts each day featuring a pianist and an exquisite string quartet – cello, viola and two violinists. Each player, a recent graduate of top American music schools, was obviously a skilled professional with a wide repertoire ranging from the classical standards – Bach, Schuman, Beethoven – to Leonard Bernstein, the Beatles and Freddy Mercury. Judging by the enthusiastic overflow crowds for each Lincoln Center performance, the smallish room used by the quintet needs to be expanded in the future. 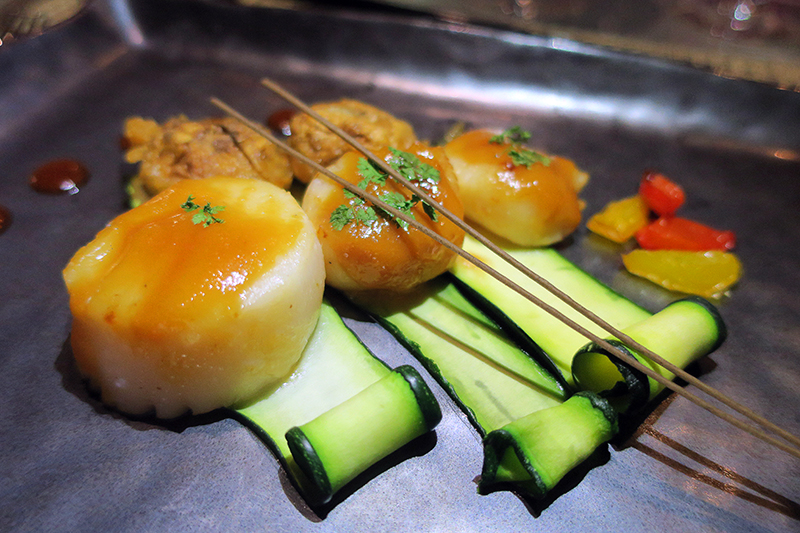 No expansion is needed in the Eurodam’s generous dining areas. The ship may be American-owned and registered in the Netherlands but the Asian food, in particular, has to be among the tastiest and most creative of any cruise line. The Lido Buffet, on Deck 9, always has a good selection of Thai, Indian or Japanese food at lunch or dinner but the best venue is Tamarind on Deck 11. This extra cost ($25 per person) restaurant in a quiet, secluded section of the ship, has charming Indonesian servers and a menu filled with visual and tasty delights – Shrimp Tempura, Shanghai Ribs, a spicy Satay Sampler, and for mains, Lime Glazed Sea Bass or Wasabi and Soy Crusted Beef Tenderloin.

On this cruise from Vancouver to San Diego Tamarind was also the location of a special Asian dinner, prepared by Japanese Sushi Master Chef Andy Matsuda from Holland America’s Culinary Council. It was a five-course feast, imaginative sushi of course but also included a delectable Sashimi Style Tuna Trio and Grilled Scallops Dengaku. Each course was accompanied by high end wines. 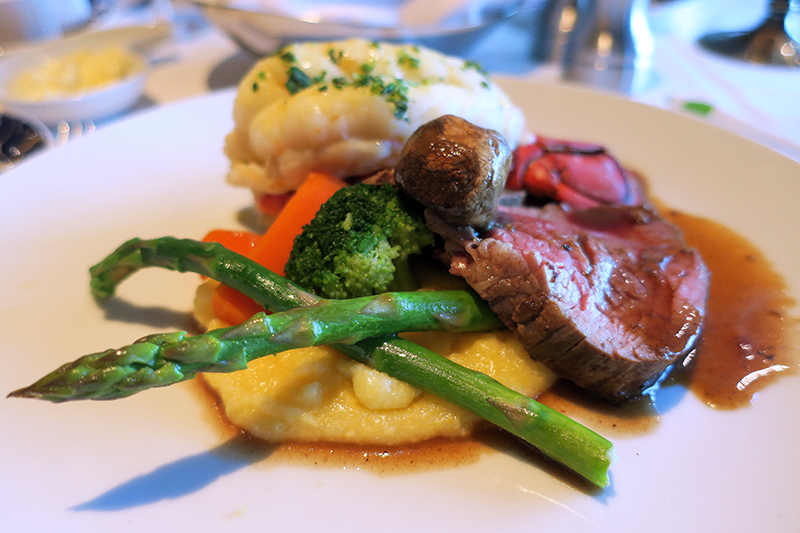 Along with the rarely crowded Lido Buffet, the cost-included main dining room covers two floors at the rear of the ship and, on our 11-day cruise, had varied and interesting fare each evening. We were impressed.

Covered with white cloths, the tables for two, four, six or eight guests have well trained, friendly waiters who presented menus with selections like Surf & Turf (tender and delicious lobster and beef), BBQ ribs, veal cutlet or chicken parmigiana  The fish, especially the fresh wahoo the chef picked up in San Diego, was particularly good.

Of course, vegetarian options were always available. Our only disappointment in the main dining room was with the Mexican food, offered for a couple of evenings while we were cruising along the Mexican Riviera. Very bland compared with the real thing.

With very few miscues, cuisine is obviously very important on Eurodam. During the day, the BB King’s Blues Club is converted into America’s Test Kitchen where chefs prepare special dishes before an appreciative audience and answer questions about their techniques. Master Chef Andy showed off his sushi skills with a whimsical Panda Face roll.

Our itinerary included five sea days giving us the opportunity to fully explore the ship. From pickleball and shuffleboard courts on the top deck to the two swimming pools, observation lounges with a library, computer center, lecture rooms and a smoke-free casino, there was always something to do. 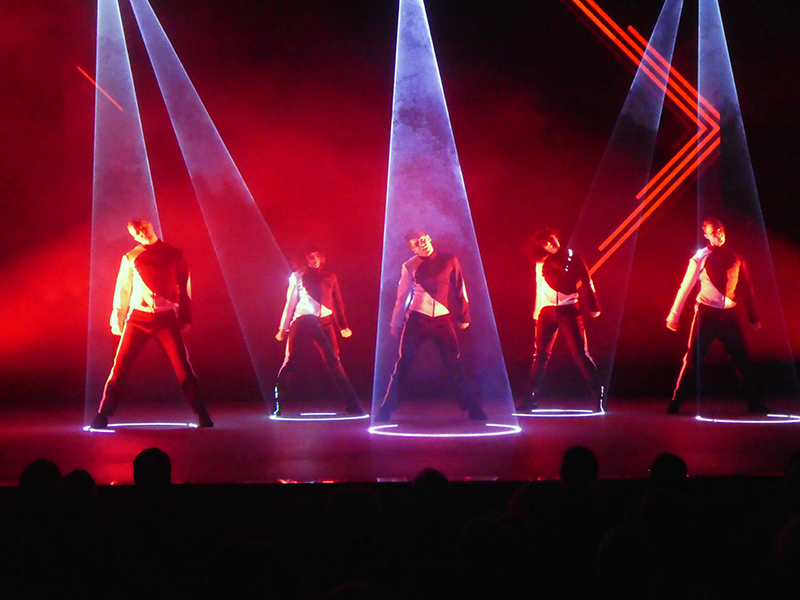 We boarded Eurodam in Vancouver, one of the most livable, picturesque cities in North America. It has an excellent cruise port facility at Canada Place and. as expected, boarding the ship was easy and efficient.

After two busy sea days we anchored off the charming California city of Santa Barbara where Eurodam’s lifeboat tenders were used to take guests ashore. This was the first of two tendering stops, both of which seemed to have delays and logistical problems.

Next day, on the pier in San Diego, we found a nearby hop-on, hop-off trolley which gave us an excellent overview of this attractive city with its palm-lined boulevards. A highlight was crossing the two-mile-long Coronado Bridge. We can only be envious of San Diego’s semi-tropical, year-round sunny weather. 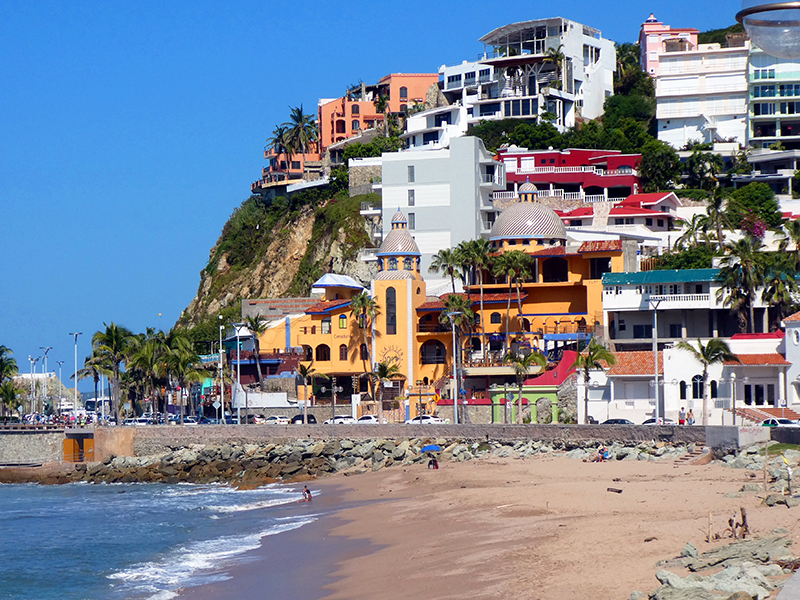 Our cruise from Vancouver to San Diego also continued on to Mexico. The Mexican Riviera offered guests a trio of fascinating cities, each with its own special attributes. Cabo San Lucas is a resort destination at the southern tip of the Baja California Peninsula. Another port requiring a tender, the city of 80,000, one of the Top Five Mexican tourist destinations, is in a beautiful Pacific setting with pristine beaches set among rugged cliffs

Mazatlan, population 500,000, is slightly off the Mexican tourist radar and thus more authentic with many colonial buildings. Its colorful waterfront walk is filled with sculptures and, for tourists, daring young men who dive into shallow water from a 50-foot-high rock.

Our last Mexican port, the tourist hot spot of Puerto Vallarta. has a magnificent beach setting flanked by lush, palm-covered mountains. We chose a spirit and food tour where the chefs made us complex cocktails using raicilla, a cousin of tequila, also made from agave. This was followed by some authentic Mexican food – spicy and tasty.

As we sailed north towards San Diego and disembarkation, we were glad we splurged for a Signature Suite, the lowest of three suite categories. We had a large room with plenty of storage space, a generous balcony, a huge 50 inch flat screen TV with plenty of channel and movie choices (including MSNBC, Fox News and BBC News) and, best of all, a large bathroom with twin sinks, a Jacuzzi tub and a separate shower. We were spoiled and would probably upgrade again.

At the start of the cruise the Eurodam Hotel Director told us he’d guarantee the best live music at sea. He was right. But with the ship emerging from dry dock in 2015 and with continuing improvements since then, we’d say his prideful boast could be accurate about several other areas of this sophisticated vessel.