Holland America has done something amazing.

Cocktails on the Koningsdam / photo: HAL

It has successfully meshed 144 years of maritime history with new design, entertainment, and culinary offerings on its new Koningsdam. In fact, the ship brings an entirely new look to the Holland America Line.

The Koningsdam was launched in Europe a little less than a year ago. At that time Queen Máxima of the Netherlands officially named the ship in the port of Rotterdam. In early November Koningsdam sailed into Florida’s Port Everglades for a winter season of Caribbean cruises. She will return to Europe in the spring.

Entertainment on the Koningsdam

I recently cruised aboard this marvelous ship and found it wonderful. Just consider, for example, the showroom, dubbed World Stage, where I saw an outstanding BBC World production. 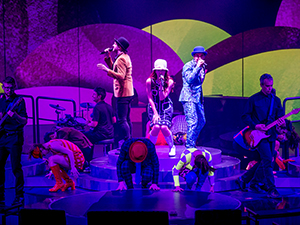 “Holland America Line cruises are all about experiential travel and venturing to all corners of the globe, and this exclusive partnership with BBC Earth will make that a richer, more rewarding experience for our guests,” said Orlando Ashford, Holland America Line’s president.

Moreover, just a few shorts steps away you’ll find Lincoln Center Stage. It features talented musicians performing classical music and, perhaps, a touch of Latin tunes. Then it is on to BB King’s All Stars where blues reign supreme, and Billboard Onboard with pop music from the 1960s on.

Keeping with the message, you’ll also find music playing a role in the décor throughout the ship. As a matter of fact, even the decks are named Gershwin, Mozart, Schubert, and Beethoven.

Just as the music venues heralds a new era for HAL, so does several new dining experiences aboard Koningsdam. 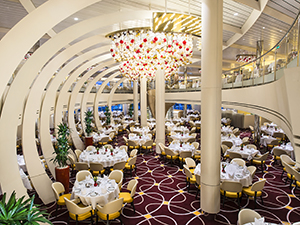 For example, Tamarind, a pan-Asian restaurant, and the popular Pinnacle Grill are featured on many HAL ships.

Most noteworthy is the brand new is the Food & Wine magazine-sponsored Culinary Arts dining room with a state-of-the-art open kitchen. The restaurant is an offshoot of cooking classes HAL launched in its fleet about ten years ago. Another exciting and innovative eatery is Sel de Mer, a French seafood dining room that is excellent! The Italian-style Canaletto serves family-style dinners.

The redesigned Dining Room has a more modern fashion. Classic Lido Market has developed into many interesting stations and provides three very different meals a day. The new stations offer fresh and inviting ethnic items, as well as sandwiches and salads. The New York Deli is one of the most favorite new additions, but the wait for a Reuben sandwich was way too long.

Dive In, on the Lido Deck, features hot dogs and hamburgers and lovely crispy fries. 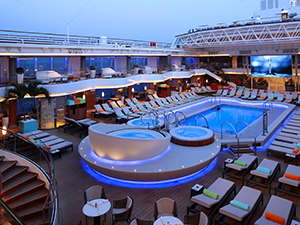 The Dutch Café is ideal for a snack, coffee or a cup of tea with lots of Dutch treats. The café is also new with the Koningsdam and very much like something one might enjoy in Amsterdam. Alternate restaurants charge a per-person fee.

Holland America, however, hasn’t thrown out the baby with the bathwater.

Be on the lookout for a decidedly 21st-century décor aboard the ship. As a result, prints of old sailing vessels, 17th-century maps, and other artifacts have been replaced.

Also look for modern versions of the classic blue-and-white Delft tableware, and more chrome throughout. Expect a modern, trendy feel to furnishings and soft goods designed to appeal to a younger demographic.

Family Time on the Koningsdam 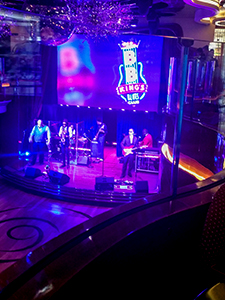 Club Hal, the line’s children’s program, offers a magnificent, group of colorful play areas for kids as young as two and up to 17. Fanciful and attractive, pillars look like paintbrushes, a paint can is a play area, and kids can slide down a massive tape dispenser.

Tweens 8-12 have their area with choice video games, Xbox 360 and age appropriate activities. Teens have The Loft, a special place where the 12-17 set can hang out.

In the first place, HAL cabins are some of the best designed at sea. As a result, two people will find plenty of room – with cabinets left over – for a multi-week voyage. 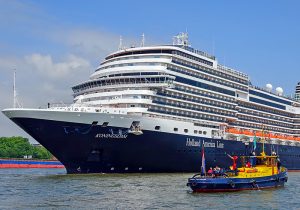 All cabins include flat-panel televisions, a DVD player, in-room safe, mini-fridge, and telephone.

Spa and Fitness on the Koningsdam

A full-service spa features many traditional – and some new trendy treatments – geared to make you feel great. In addition, a hair salon and state-of-the-art fitness center round out the bright, airy complex forward on the Lido Deck. Varied classes are offered daily.

Duty-free shopping is available aboard ship.

Of course, The Daily Navigator, the ship’s newspaper, lists operating times for all venues: restaurants, shows, classes, the casino, and shops.