Historically speaking, Finland has been Finnish for less than 100 years.

Helsinki was first founded in 1550 by the Swedes as a trading post, then conquered by Russia in 1808 (after which the city was greatly expanded) and then set off on its own after it broke away from the Czar in 1917 following the October Revolution.

You can see clear evidence of this tug-of-war in front of Helsinki Cathedral where a statue of Czar Alexander I looks out across the city to Market Square where Finnish ferries set off for the 18th-century Swedish island fortress of Suomenlinna. It is this amalgam of cultures, especially visible in Helsinki’s architecture, which makes the city so appealing to travelers.

But there’s much more to Helsinki than history and architecture. Culture – especially design – also abounds. So much in fact, that the city was designated the World Design Capital in 2012. This is a city that will reward you with beautiful and innovative design wherever you turn.

A bakery in the Design District

It’s also a compact place that’s easy to explore on foot. Start a tour of it at Helsinki Cathedral, the white, Neoclassical building that’s become a symbol of the city. Climb up its steps that face the city’s historic Senate Square and you’ll be rewarded with a beautiful view of the area and the city beyond.

Walk down the steps and through the historic 18th-century quarter in front of you, and you’ll come to Market Square on the harbor, which is the hub of the city’s waterfront. The square is filled with stands selling produce, handcrafts and food, and is a great place to have lunch (I had a good meal of reindeer meatballs, small potatoes with garlic sauce and a beer for €11 there one afternoon). Others stop by the food stands for picnic lunches to take out on the nearby ferry to Suomenlinna Sveaborg Fortress, a great half-day trip.

Suomenlinna is a national monument, UNESCO world heritage site and one of the most popular attractions in Finland. At one time the sprawling six-island fortress, built by Sweden in the 18th and 19th centuries to protect the harbor, was home to almost 900 people.

From the market turn west and walk up the Esplanade, Helsinki’s beautiful boulevard that is lined with park benches amid beautiful plantings of zinnias and roses. Along the way you’ll pass some well-know shops such as Louis Vuitton, and also the store for Marimekko, the brightly colored fabrics popularized by Jackie Kennedy back in the 60s and still popular today. (Marimekko, by the way, has its annual sales in June/July and January.) It’s a great walk, especially in the afternoon when people fill the outdoor cafés along the street.

The Marimekko store on the Esplanade

Further up at the top of the Esplanade is Stockman’s department store. In addition to a large variety of upscale goods, the store also has a sushi bar, a deli, and a take-out section with pre-made meals. On the lower level is a large supermarket.

Stockman’s is only two blocks away from the Hotel Seurahuone, an art deco hotel where I was staying, across from Helsinki’s Central Station. The station is an architectural masterpiece designed by legendary Finnish architect Eliel Saarinen and it’s a beautiful building, especially inside, although it is most famous for the striking statutes on its exterior. Its café, Eliel, has good Finnish food and sandwiches, and also serves breakfast. It’s clean, spacious and a great place to stop.

Despite the thousands of people that always seem to be moving through and around the station, it is amazingly quiet, as are most places in Helsinki. Once, when I was there during rush hour, the only sound I heard was that of a lone saxophonist on the side of the station. And I’ve never heard a car horn anywhere in Helsinki.

The best way to get to different areas of the city is by tram or trolley and you can catch several of them in the thoroughfares near or at the station. One day I took tram #10 to the Design District where I visited the interesting Design Museum, housed in a former school. The center of the district, on Undenmaankatu Street, is where art and fashion merge in lots of little boutiques. After wandering through the boutiques leave time to wander about the neighboring streets to admire the Art Nouveau architecture.

Another day I took the #4 Tram out to Uspenski Cathedral, a redbrick church that combines both Eastern and Western influences, and is the largest Orthodox church in Western Europe. I then continued on the tram a little further out on the small peninsula since I had read that the area, with its Art Nouveau architecture, was interesting to walk about.

One morning I took Tram #6 from the station down to Kauppahalli Market, which is not a tourist market but a commercial food hall. Although I had come for the flea market outside, inside the small hall I found a few dozen stands where all sorts of vegetables, fruits, wild berries, meat, pastries, cheese, etc. were being sold.

Tram #10 in the Design District

On the way back out through the flea market I came across a couple sitting by their table with a few trinkets. One of their pieces, a small hand-painted piece of Russian jewelry, caught my eye and I would up buying it after we bargained a bit.

I walked back to the tram stop but at the last minute decided  decided to take the hop-on / hop-off bus, which stopped at the same stop, instead of the tram. I’m glad I did since the bus drove up Fredrikinkatu, a street lined with 18th– and 19th-century buildings, which are now home to many upscale small shops. It was a good way to see some of the other sights of the city I wouldn’t have seen on the tram.

I got off the bus near the famous Temppeliaukio Church, a unique church that was quarried out of the bedrock. It’s a deservingly popular place, not only for people being married or children being baptized, but also for the 500,000 tourists who visit it every year.

After leaving the church I  again hopped aboard the bus to visit the Sibelius Monument, designed to honor John Sibelius, the most famous Finnish composer of all time. The 30-ton monument, composed of 600 stainless steel tubes welded together one by one, was originally totally abstract, but after a public outcry the artist compromised by adding the composer’s face to it. Set in a park, it’s a striking piece of art. 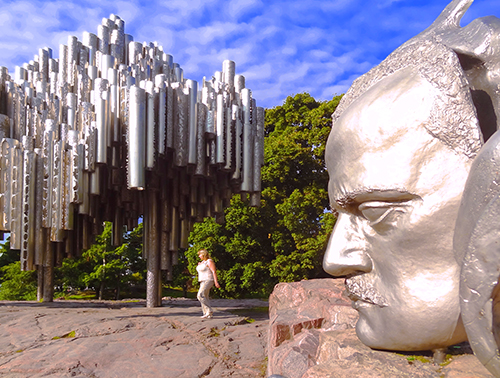 You can get a taste of the composer’s genius at the renowned Finlandia Hall or at the adjacent Helsinki Music Center, both just a short walk from Central Station. In addition to the Sibelius Academy Library, the Center also has a popular café, restaurant and shop. What caught my attention at the outdoor café, however, were several whimsical statues, one of a troll-like creature who appeared to be stacking wood for the winter.

I would have liked to have stayed around the Music Center for a little while and have lunch in the café while admiring the architecture of the buildings in the area. But I had to move on and rush back to the harbor.

There was an afternoon ferry I wanted to take out to a sea fortress.