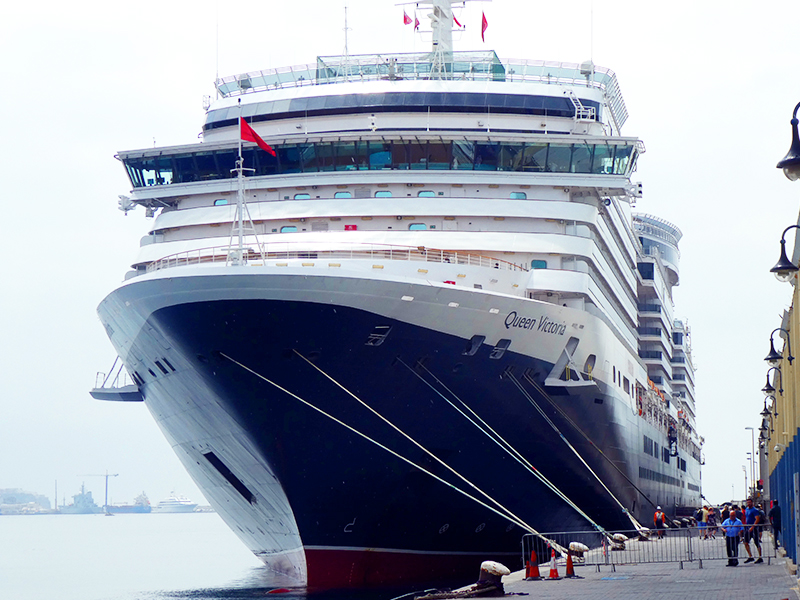 On a wine cruise, the Queen Victoria docked in Gibraltar.

Samuel Cunard would be very pleased with a wine cruise that focused on vineyards and exceptional vintages.

According to Cunard historian John Langley, the Canadian-born founder of the famous shipping and cruise line was probably a teetotaler. But the steamship pioneer saw the virtue (and profit potential) of stocking even his early paddle wheelers with fine wines from Europe.

Our 14- day “Voyage du Vin” on Cunard’s Queen Victoria left Southampton and headed south towards some of the prime grape growing areas in Spain, Italy and France.

Ahead of us were tours of some outstanding European vineyards, guest speakers with broad knowledge of wines, elaborate dinners with matching wines for each course and onboard tasting sessions featuring many of the best of the more than 400 wines from the Queen Victoria’s extensive cellars. 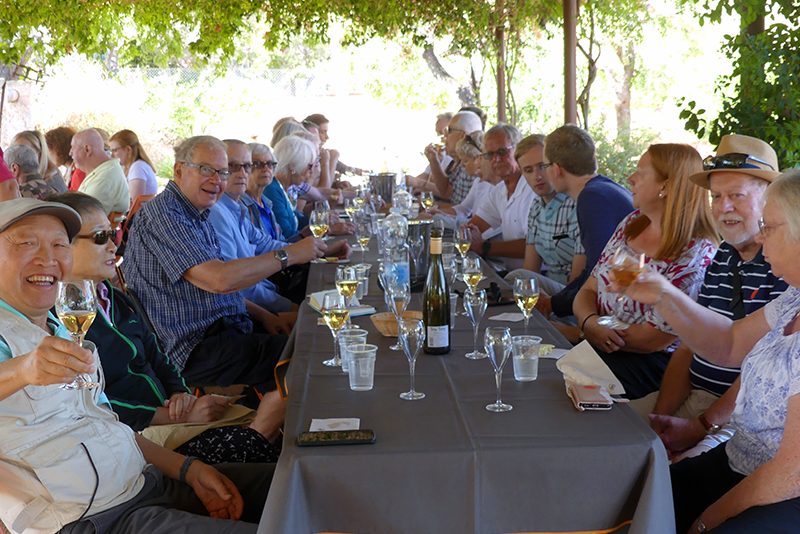 An Elegant Wine Cruise on Land and Sea

Arriving in England a day in advance we stayed at a Cunard-recommended hotel, Chewton Glen, a magnificent Relais and Chateaux historic inn adjacent to the New Forest, and close to the port of Southampton. An ideal location and wonderful seafood.

Boarding the Queen Victoria the next day was quick and efficient. The elegant grand lobby led to many spacious public rooms designed for comfort and convenience.

The centerpiece is the huge Queen’s Room, used for big band dancing, afternoon teas, concerts with the resident string trio or guests like the outstanding classical guitarist, Carlos Bonell, daily exercise classes (like line dancing and aerobics) and formal receptions on gala nights.

The 730-seat Royal Court Theatre is designed to look like a large, historic London West End playhouse with comfortable, red velvet seats, great sight lines and even 16 private boxes along the sides. 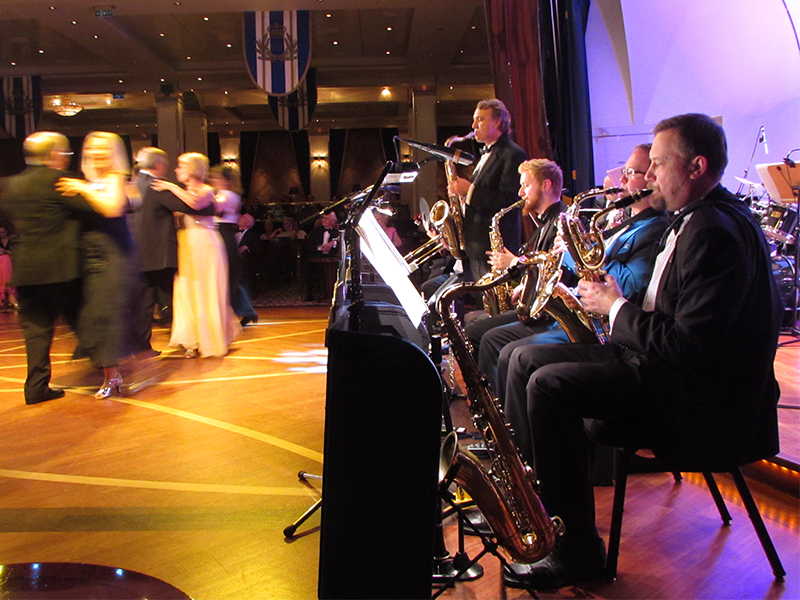 A big-band orchestra on the Queen Victoria

Unlike many cruise lines, Cunard emphasizes live music and employs two orchestras (one in the theater and one in the Queens Room) along with a talented ensemble of ten dancers and four vocalists who present six different, complex song and dance shows over the course of the cruise.

The musical highlight on our wine cruise was a brand new staging of the award-winning West End tap-dancing musical, Top Hat, itself based on the 1935 movie starring Fred Astaire and Ginger Rogers. Marvelous entertainment with familiar Irving Berlin tunes.

Every day, in addition to the wine cruise themes, there were dozens of choices of things to do (from sporting challenges like darts, ping pong, shuffleboard and fencing to trivia, art and bridge classes to guest speakers on a wide variety of subjects like astronomy, climate change and the Royal Family). If guests preferred to read and relax, the 6,000 volume library (covering two decks via a spiral staircase) is one of the best at sea.

On most cruise ships, the main buffet restaurant is usually crowded and unappealing. On Queen Victoria, the Lido (covering the back half of Deck 9) was never crowded and offered a wide variety of British and international dishes. In fact, some guests preferred to dine each day in the Lido rather than the more formal Britannia dining room on decks two and three. 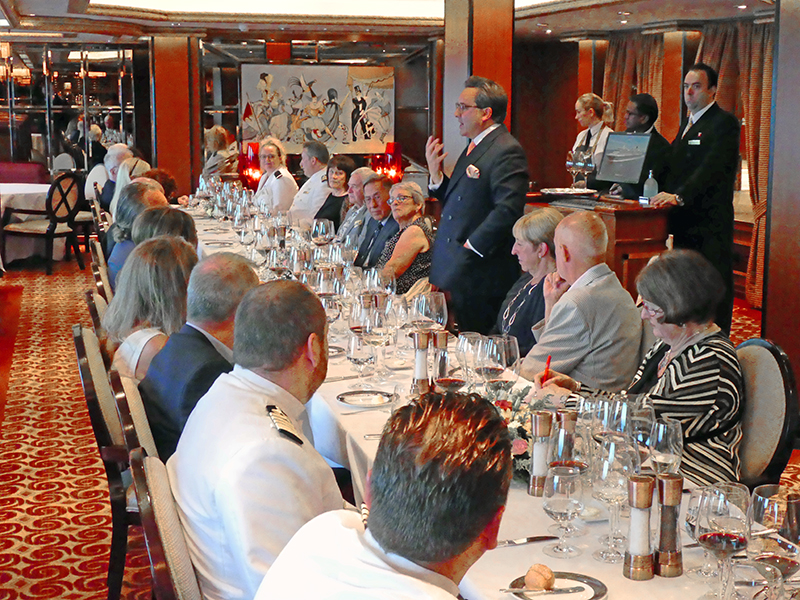 As most cruise lines become more casual, Cunard alone retains the tradition of requiring men to wear a jacket (tie optional) each night at dinner and, for several formal nights on each cruise, a dark suit, tuxedo or dinner jacket. Clearly, Cunard guests love to dress up. One guest from Wales told us the formal nights were great because they reflected the ship’s opulence and style.

After a day at sea, our Voyage du Vin began in earnest. The Queen Victoria docked in Vigo, Northern Spain, and we chose a tour to the Galician wine region. The normally damp, cool climate produces some wonderful white grape varieties, especially the Albarino. To avoid rotting on the wet ground, grape vines are supported by wooden or cement pilings, sometimes a couple of yards high.

Over the course of the wine cruise, several wine experts gave talks and hosted opulent dinners in the Verandah Restaurant. One evening we chose a Bordeaux theme dinner with The Wall Street Journal and Sunday Times wine writer Will Lyons. 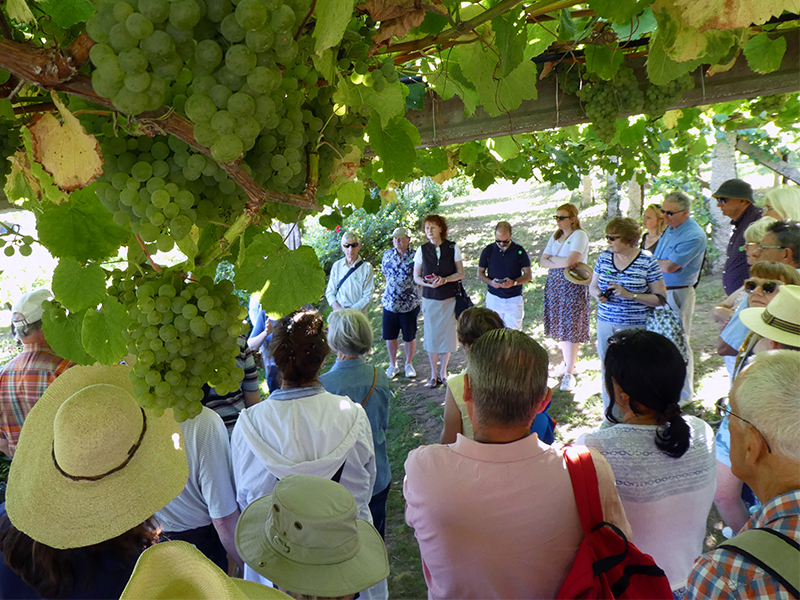 Our next stop on this excellent wine cruise was Mallorca, Spain, where our tour took us to a small, rural winery run by a family proud of its botanical garden (exotic cactus) and historic farm implements. Seated in the garden along two long tables, we were served several excellent Mallorcan white and red wines along with an outstanding sweet wine.

Following another activity-filled day at sea on Cunard’s wine cruise, we docked in La Spezia, Italy (unremarkable since it was reconstructed after heavy bombing in World War 2) but, like many tourists, headed for nearby Pisa and its famous Leaning Tower (now leaning less, thanks to clever engineering). But Italian wine beckoned as our tour then proceeded to a 17th Century farmhouse in Tuscany where the wine maker provided generous samples of his excellent vintages along with snacks and cheese.

In Cannes, France, we had to anchor the Queen Victoria and use lifeboat tenders to reach the port. We’d seen the glamorous film city before and opted for a tour to Old Antibes, an ancient town dating back to the Iron Age. The town has an excellent Picasso Museum and includes the largest yachting harbor in Europe. We enjoyed the lively market, including colorful spice shops, reminiscent of Istanbul. 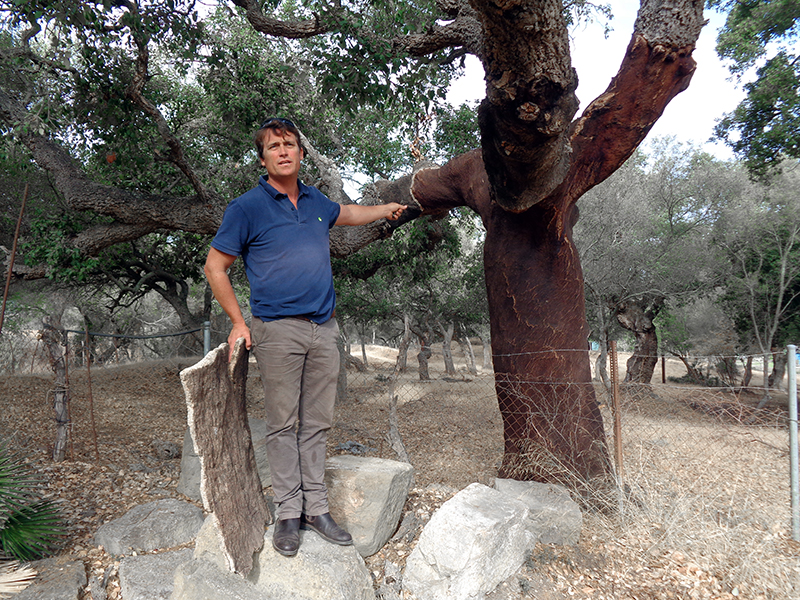 A talk about cork trees in Spain Gibraltar

After docking in Barcelona, another non-wine tour took us to the old Roman city of Terragona. Its amphitheater dates from the second century while the impressive town cathedral was begun in 1154. There are lots of tourists in Terragona…and lots of pickpockets. 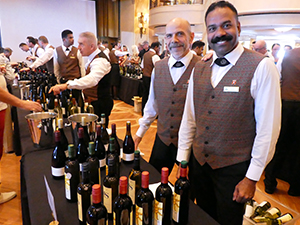 A New World tasting aboard the Queen Victoria

Back on board Queen Victoria, we chose another opulent, extra cost dinner, this time focusing on Italian wines. Our host and wine guide was Master of Wine, David Gleave. For our $US 130 we had another superb dinner featuring Herb Gnocchi, Smoked Venison Carpaccio and Chateaubriand. Our favorite wines among the eight served were a dry, well-balanced La Rocca Pieropan, a 2016 Fontodi Chianti Classico and a  2014 Barolo Aldo Conterno.

Our final Cunard tour on our wine cruise before sailing back to Southampton, was from the fascinating port of Gibraltar. We left the British Territory, crossed the airport runway (traffic stops when planes come and go) and entered Spain again.

Our destination was a cork and cattle ranch where the friendly owner showed us how cork is stripped from the trees every nine years and then regenerates. The main use is for wine stoppers but purses, hats and toys can also be made from the material. With screw caps becoming more common, the cork farm owner is trying to diversify and use his acreage as a wedding venue and a kind of cork theme park with animals and educational exhibits.

Arriving back in Southampton was as seamless and efficient as embarkation. This  Voyage du Vin was an excellent way to combine traditional Cunard hospitality with increased knowledge of and enjoyment of wines.

Next year Cunard is planning its “Food and Wine” event aboard the Cunard flagship Queen Mary 2 as it crosses from Southampton to New York in June. Like this year, this wine cruise will also feature many wine-focused events, extra-cost dinners and expert speakers.

Samuel Cunard would be delighted.