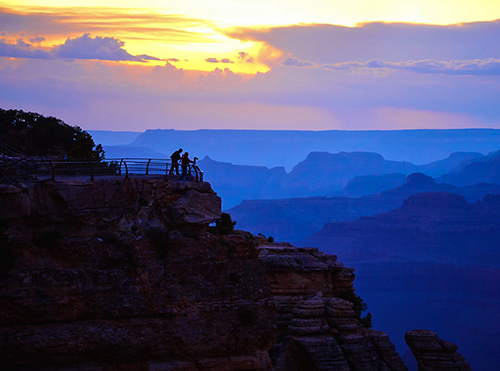 Sunset at the Grand Canyon, one of the UNESCO sites in the USA / photo: Moyan Brenn/Flickr

World Heritage Sites range from the well known – the Cathedral of Notre-Dame in France, the Historic City of Ayutthaya in Thailand, the Tower of London in England, for example – to such lesser-known places as the Matobo Hills in Zimbabwe, East Rennell in the Solomon Islands and the Struve Geodetic Arc in Moldova. You may not have heard of many of them but they are all exceptional places that need to be protected for future generations. 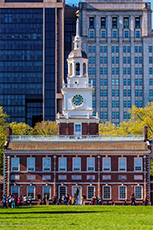 Today there are more than 1000 designated World Heritage Sites in 161 countries, many of which are of exceptional interest to travelers. The  following is a roundup of the 22 U.S. World Heritage Sites that you’ll find closer to home (followed by the date of inclusion on the list). 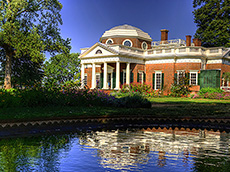 Monticello and the University of Virginia in Charlottesville (1987)
Thomas Jefferson, the author of the Declaration of Independence and third president of the United States, was also a talented architect of neoclassical buildings and designed Monticello, his plantation home, and his ideal “academical village,” which is still the heart of the University of Virginia.
Location: central Virginia, 70 miles northwest of Richmond
http://www.monticello.org/
http://www.virginia.edu/academicalvillage/

Statue of Liberty (1984)
Made in Paris by the French sculptor Bartholdi, in collaboration with Gustave Eiffel (who was responsible for the steel framework),”The Statue of Liberty Enlightening the World” was a gift of friendship from the people of France to the United States and is recognized as a universal symbol of freedom and democracy.
Location: at the entrance to New York Harbor.
www.nps.gov/stli/ 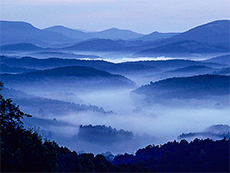 Great Smoky Mountains National Park (1983)
Encompassing almost a half-million acres, this exceptionally beautiful park is home to more than 3,500 plant species, including almost as many trees (130 natural species) as in all of Europe. Many endangered animal species are also found there, including what is probably the greatest variety of salamanders in the world. It is America’s most visited national park.
Location: Great Smoky Mountains National Park straddles the border between North Carolina and Tennessee.
www.nps.gov/grsm/

Cahokia Mounds State Historic Site (1982)
Cahokia is one of the great cities of the world. The largest pre-Columbian settlement north of Mexico, Cahokia was larger than London was in AD 1250. It was occupied primarily during the Mississippian period (800–1400), when it covered nearly 4,000 acres and included some 120 mounds.
Location: about 8 miles northeast of St Louis, in Collinsville, Illinois off Interstates 55/70 and 255.
https://cahokiamounds.org/

Monumental Earthworks of Poverty Point (2014)
One of the most important archaeological sites in North America, Monumental Earthworks of Poverty Point is a complex of five mounds, six concentric semi-elliptical ridges created and used for residential and ceremonial purposes by a society of hunter fisher-gatherers between 3700 and 3100 BP. It is a remarkable achievement in earthen construction in North America that was unsurpassed for at least 2,000 years.
Location: northeastern Louisiana.
www.nps.gov/popo/ 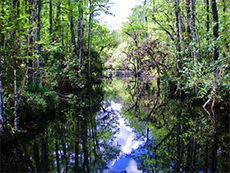 Everglades National Park (1979)
The largest subtropical wilderness in the United States, Everglades National Park protects an unparalleled landscape that provides important habitat for numerous rare and endangered species including the manatee, American crocodile, and the elusive Florida panther.
Location: at the southern tip of Florida.
www.nps.gov/ever/

Mammoth Cave National Park (1981)
Mammoth Cave National Park preserves the cave system and a part of the Green River valley and hilly country of south central Kentucky. It’s the world’s longest known cave system, with more than 400 miles explored, and home to a varied flora and fauna, including a number of endangered species.
Location: in south central Kentucky about 90 miles south of Louisville.
www.nps.gov/maca 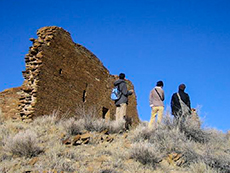 Chaco Culture (1987)
Chaco Canyon, a major center of ancestral Pueblo culture between 850 and 1250, was a focus for ceremonials, trade and political activity for the prehistoric Four Corners area. In addition to the Chaco Culture National Historical Park, the World Heritage property includes the Aztec Ruins National Monument and several smaller Chaco sites managed by the Bureau of Land Management. It has the densest and most exceptional concentration of pueblos in the American Southwest.
Location: in northwestern New Mexico, between Albuquerque and Farmington, in a remote canyon cut by the Chaco Wash.
www.nps.gov/chcu/

Mesa Verde National Park (1978)
A great concentration of ancestral Pueblo Indian dwellings, built from the 6th to the 12th century, can be found on the Mesa Verde plateau in south-west Colorado at an altitude of more than 2,600 m. Some 4,400 sites have been recorded, including villages built on the Mesa top. There are also imposing cliff dwellings, built of stone and comprising more than 100 rooms.
Location: southwest Colorado.
www.nps.gov/meve/ 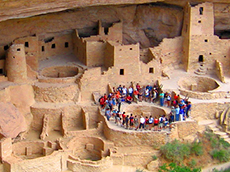 Taos Pueblo (1992)
Representing the culture of the Pueblo Indians of Arizona and New Mexico, Taos Pueblo is the only living Native American community designated both a World Heritage Site by UNESCO and a National Historic Landmark. Its multi-storied adobe buildings have been continuously inhabited for over 1000 years.
Location: about 1 ½ hours north of Santa Fe.
http://www.taospueblo.com/

Grand Canyon National Park (1979)
A powerful and inspiring landscape, the Grand Canyon was carved out by the Colorado River and is the most spectacular gorge in the world. Its horizontal strata retrace the geological history of the past 2 billion years. There are also prehistoric traces of human adaptation to a particularly harsh environment.
Location: northern Arizona.
www.nps.gov/grca/

Carlsbad Caverns National Park (1995)
Beneath a rugged land of rocky slopes and canyons, cactus, grass, thorny shrubs and the occasional tree, is the hidden treasure of Carlsbad Caverns deep underground. The numerous are outstanding not only for their size but also for the profusion, diversity and beauty of their mineral formations.
Location: southeast New Mexico, near the border of Texas.
www.nps.gov/cave/ 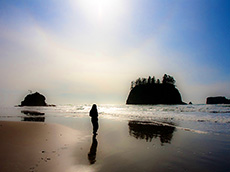 Olympic National Park (1981)
Olympic National Park is renowned for the diversity of its ecosystems. Glacier-clad peaks interspersed with extensive alpine meadows and the best example of intact and temperate rainforest in the Pacific Northwest. The park also more than 60 miles of wilderness coastline, the longest undeveloped coast in the contiguous United States.
Location: northwest Washington State.
www.nps.gov/olym/

Redwood National and State Parks (1980)
The park comprises a region of coastal mountains north of San Francisco that is covered with a forest of coastal redwood trees, the tallest and most impressive trees in the world. The marine and land life are equally remarkable, in particular the sea lions, the bald eagle and the endangered California brown pelican.
Location: along the Pacific Coast north of San Francisco.
www.nps.gov/redw/

Waterton Glacier International Peace Park (1995)
In 1932 Waterton Lakes National Park in Alberta, Canada was combined with the Glacier National Park in Montana, to form the world’s first International Peace Park. Situated on the border between the two countries and offering outstanding scenery, the park is exceptionally rich in plant and mammal species as well as prairie, forest, and alpine and glacial features.
Location: on the U.S.-Canada border in Montana.
www.pc.gc.ca 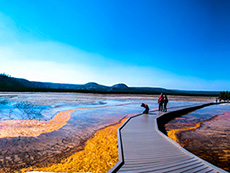 Yellowstone National Park (1978)
The vast natural forest of Yellowstone National Park covers nearly almost 3,500 square miles and contains half of all the world’s known geothermal features, with more than 10,000 examples including two thirds of all geysers on earth. It is equally known for its wildlife, which incldes grizzly bears, wolves, bison and wapitis.
Location: 96% of the park lies in Wyoming, 3% in Montana and 1% in Idaho.
www.nps.gov/yell/ 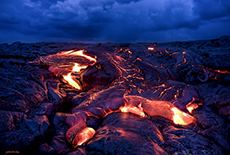 Hawaii Volcanoes National Park (1987)
Hawaii Volcanoes National Park contains two of the most active volcanoes in the world, Mauna Loa (more than 13,000 feet high) Hawaii and Kilauea (4,100 feet high), both of which tower over the Pacific Ocean. Volcanic eruptions have created a constantly changing landscape, and the lava flows reveal surprising geological formations.
Location: on the island of Hawaii.
www.nps.gov/havo/

Kluane / Wrangell-St. Elias / Glacier Bay / Tatshenshini-Alsek (1979)
These parks comprise an impressive complex of glaciers and high peaks on both sides of the border between Canada (the Yukon Territory and British Columbia) and Alaska. The spectacular natural landscapes contain the largest non-polar icefield in the world and are home to grizzly bears, caribou and Dall’s sheep.
Location: southeast Alaska.
http://whc.unesco.org/en/list/72 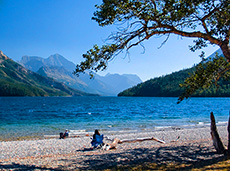 Papahanaumokuakea (2010)
Papahanaumokuakea is a vast and isolated linear cluster of small, low-lying islands and atolls, with their surrounding ocean, extending 1,200 miles. The area has deep cosmological and traditional significance for living Native Hawaiian culture and on two of the islands there are archaeological remains relating to pre-European settlement and use. It is one of the largest marine protected areas in the world.
Location: Papahanaumokuakea is located approximately 150 miles to the northwest of the main Hawaiian Islands.
http://www.papahanaumokuakea.gov/

La Fortaleza and San Juan National Historic Site (1983)
Between the 15th and 19th centuries, a series of defensive structures was built at this strategic point in the Caribbean Sea to protect the city and the Bay of San Juan. They represent a fine display of European military architecture adapted to harbor sites on the American continent.
Location: San Juan (the current official residence of the Governor of Puerto Rico).
www.fortaleza.gobierno.pr/