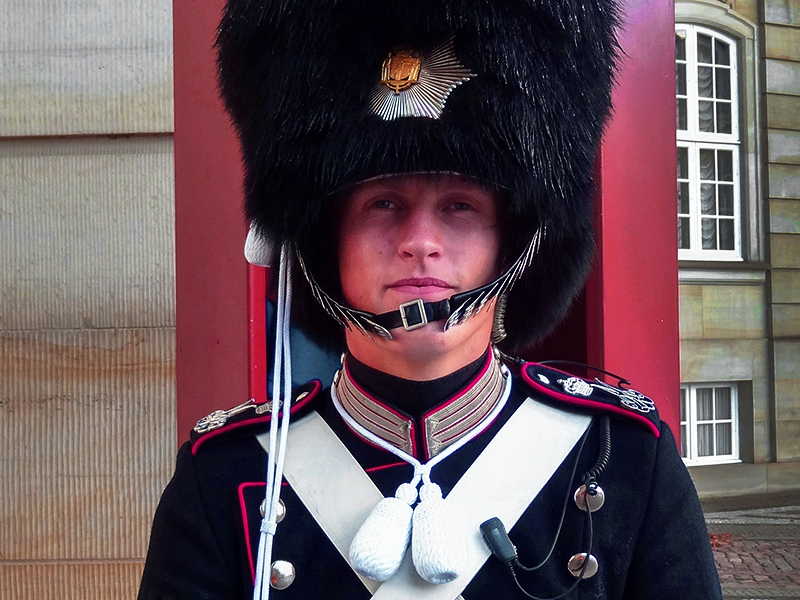 The Danes have a word for it: “hygge”.

And Copenhagen oozes with it.

Hygge is one of those words that doesn’t translate very well, but if you think ”coziness” and a nice atmosphere and wonderful people all around, you kind of get a sense of it. And even that really doesn’t capture its meaning. Just let it be said that Copenhagen is regularly voted the happiest city in the world. 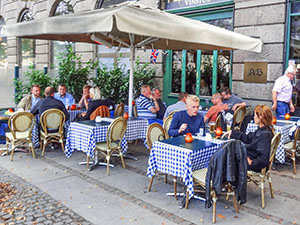 Most travelers, though, don’t think of Copenhagen as the city of hygge. To most of us, it’s all about Hans Christian Andersen and Hamlet, toy soldiers and sleek design and sexy women. There’s that, of course, but also a lot, lot more. In fact, there are a lot things to see and do in Copenhagen.

From its founding as a Viking fishing settlement to becoming one of Europe’s oldest capitals, Copenhagen has charmed travelers. Today, most of them come in summer (in droves for the annual Copenhagen Jazz Festival, July 7-16 in 2017) although spring and autumn are also enjoyable times to visit.

If you’re heading to Copenhagen (and if you haven’t, you should), here are some of the places you should see. You can easily see them all since the city is quite compact and easy to get about by foot, bicycle or public transport. One tip: get the Copenhagen Card, which will save you plenty of Krone and time standing in line.

Read More: How to Travel About Scandinavia on a Budget for 2 Weeks

A tour boat on a Copenhagen canal

Copenhagen is a maritime city with a pretty harbor and canals. So the best way to get a quick overview of Copenhagen is to hop aboard a canal tour.

It will introduce you to some of the best sights in the city including, Amalienborg Palace, Christianshavn, The Black Diamond, and the Little Mermaid, among others. And besides, the view from the water is always quite different from that ashore.

One of the first things you should do in Copenhagen is to get the Copenhagen Card since the tours are free with it (but only from Gammel Strand / Ved Stranden). 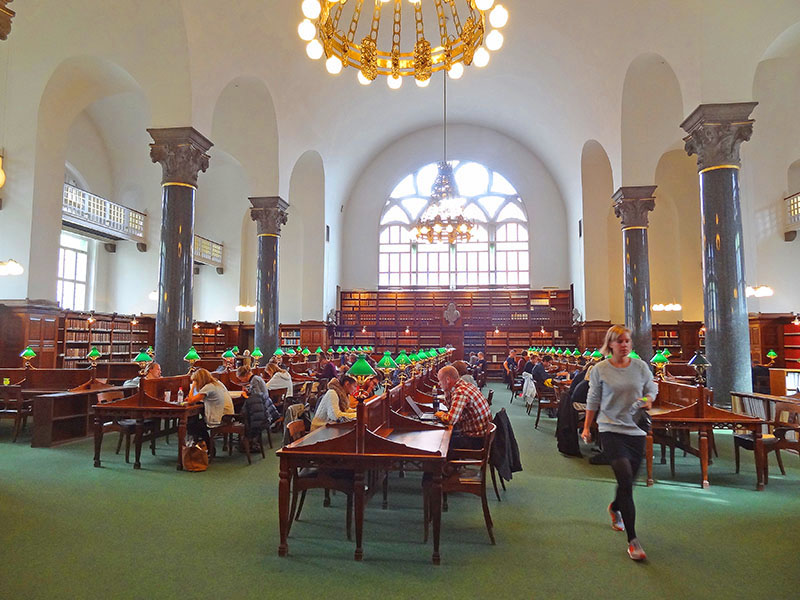 The Black Diamond is the first of a series of cultural buildings slated for construction along the city’s waterfront. Its striking irregular shape and black granite exterior have given it its name.

Beautifully wedded to the old Royal Library upstairs, it also contains a concert hall, cafeteria, and some offices. Take a look at the beautiful library; founded in the 17th century, it is the largest in Scandinavia.

Outside along the canal on the waterside plaza, you’ll find reclining chairs where people lunch and sun themselves. In my opinion, if you can get a seat, purchase some food inside and join them.

Strøget and the Stork Fountain

Take a Walk Along Strøget

Strøget is Copenhagen’s leading walking and upscale shopping street. Car free, it also has the distinction of being the oldest and longest pedestrian street in the world. A series of streets cobbled together, it connects City Hall with Kongens Nytorv, the largest square in the city.

Along Strøget you’ll discover a world of shops and brands, everything from souvenir shops to the majors. Even if you’ve left your cards back at the hotel, it’s a fun place to window shop and explore. Clutched together near the Stork Fountain (Storkespringvandet) you’ll find George Jensen, Illums Borghus, and the flagship store of Royal Copenhagen. 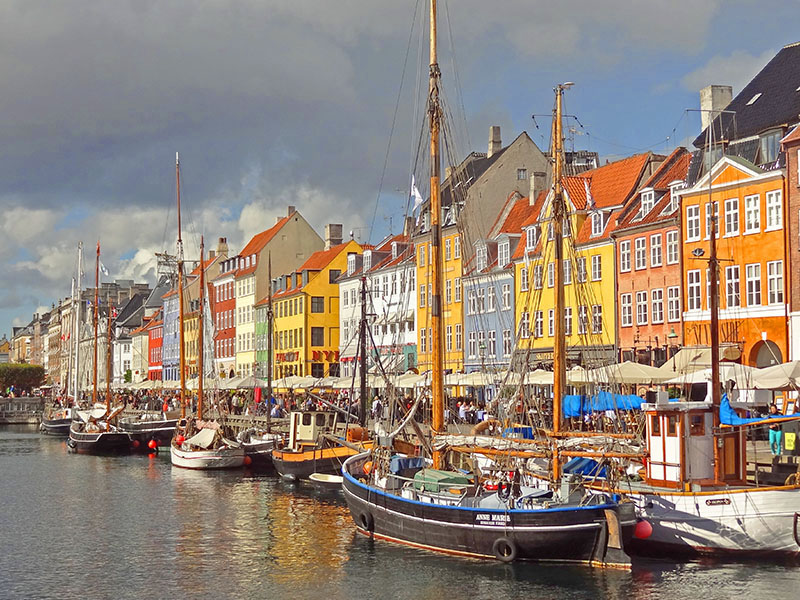 A Top Thing to See in Copenhagen: Charming Nyhavn

Only a 10-15 minute walk from Stroget is Nyhavn where colorful 18th-century gabled townhouses run along a harborside promenade. No. 9, dating back to 1681 and the oldest house in the area, is still unchanged.

Hans Christian Andersen lived in several houses along the promenade during his lifetime, at no. 18, 20, and 67. He wrote “The Tinderbox” and “The Princess and the Pea” while residing at #20.

Nyhavn is lined with sailing vessels and a bevy of cafes and restaurants, and is more a canal than a harbor. One of the most picturesque streets in Scandinavia, it’s a good place to stop for lunch or an afternoon drink. The annual Christmas Market is held here come December.

In the mood for ice cream and fresh-made waffle cones? Go the corner of Lille Strandstraede. There’s a delicious ice cream shop four steps down from the street in the basement of the little corner building. 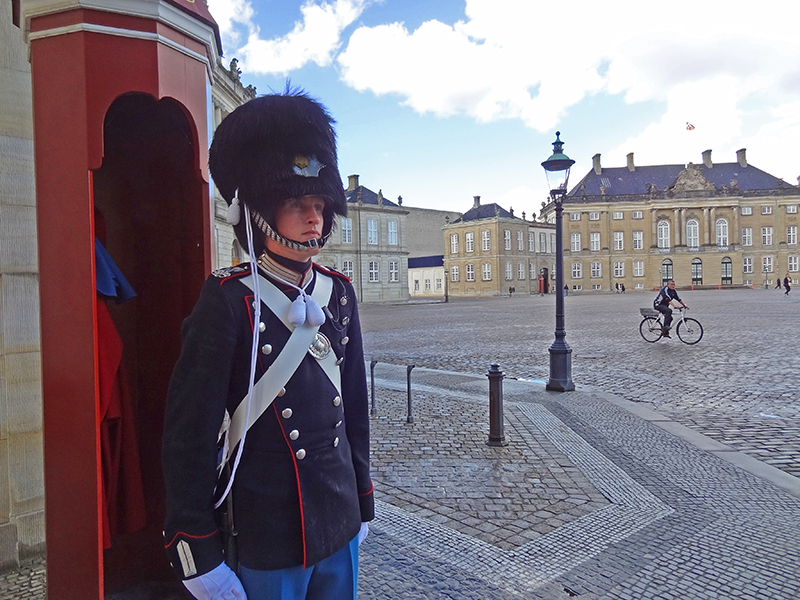 FYI, the Danish monarchy is the oldest in the world. And Amalienborg Palace, the home of the current Monarch, Margrethe II, and the Royal Family, is only a short walk from Nyhavn.

The palace is actually four identical rococo buildings, quite stately and looking as palatial as any regal residence should. Once when I visited, I was upset since I had just missed the formal changing of the guard at noon. It turned out to be a blessing, however, since I then had nearly the entire broad cobbled square to myself.

The lack of a crowd also provided another unexpected benefit: I was able to have a conversation with one of the guards as he stood at his post. 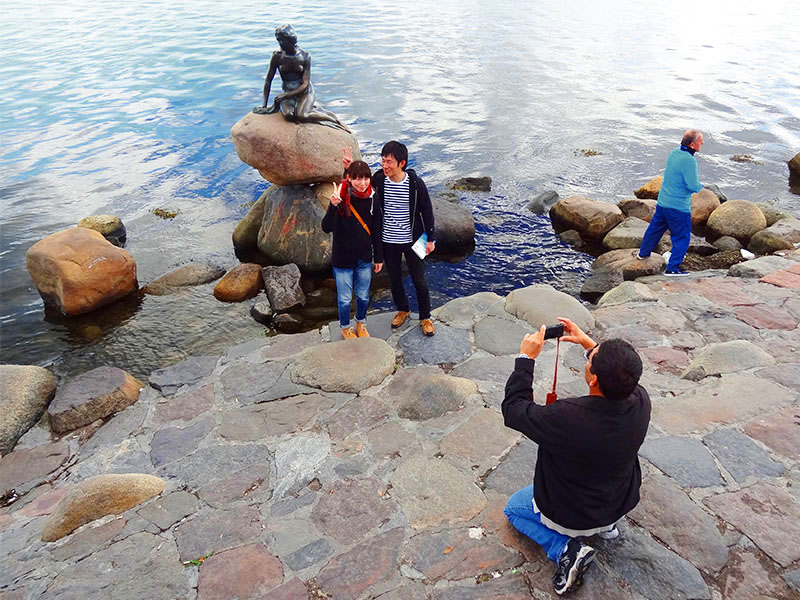 Yes, that mermaid. And the world-renowned 100+-year-old statue is only about a 15-minute walk from Amalienborg Palace. You can also reach it via Bus #26 (Langelinie stop), which also stops at Central Station, Nyhavn, and Rosenborg Castle. (Don’t forget that Copenhagen Card).

Based on the fairy tale of the same name by Hans Christian Andersen, the statue has become such a symbol of the city it has been vandalized numerous times in social and political protests over the past 50 years.

Even if you’ve seen it on the boat tour, see it again. You’ll get an entirely different (and up-close) view of her. 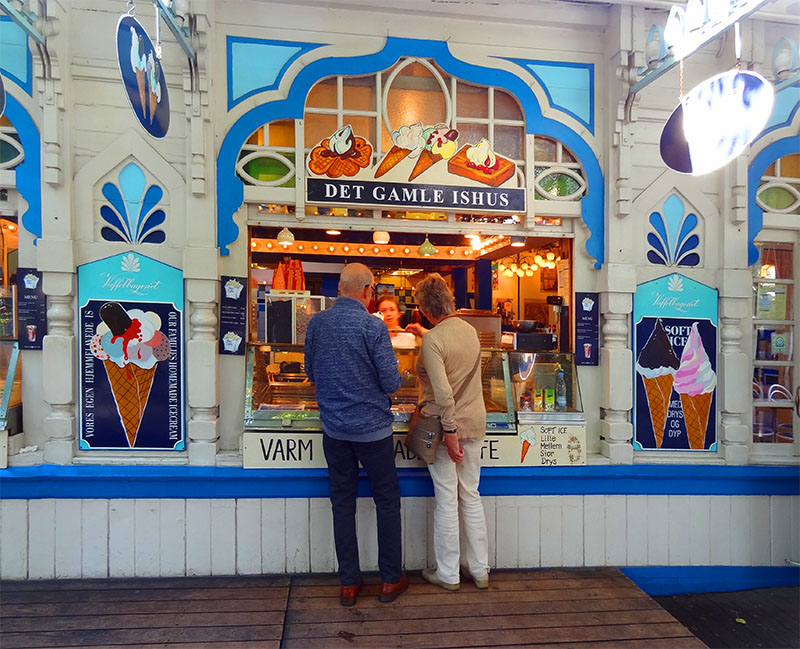 A food stand in Tivoli Gardens

Another Top Thing to See in Copenhagen: Tivoli Gardens

Although one of Europe’s oldest amusement parks, it’s also much more with its lake, Chinese pagodas, and outdoor theater. You’ll also find some good restaurants and shopping (Illums Bolighus has a store here). Visit it and you’ll understand why Tivoli is one of the top things to see in Copenhagen.

The park is across the street from Central Station and is best seen at night, if possible. (One time I visited it seemed a bit carnival-ish, which I soon realized was due to me visiting mid-day. In the evening myriad lights transformed the place into an enchanting wonderland.)

If you can, plan to have a meal in Tivoli, perhaps before you catch a train across the street. Once, after perusing menus and patrons at several restaurants, I wisely chose one with the most Danes and fewest tourists.

I ordered a dark Carlsberg and then mistakenly ordered a mini- smørrebrød of a half-dozen small dishes. Amazingly, I ate it all except the herring, which I’m certain shocked the waiter in this herring-loving country. All in all, it was excellent but left me stuffed for my train ride to Brussels. 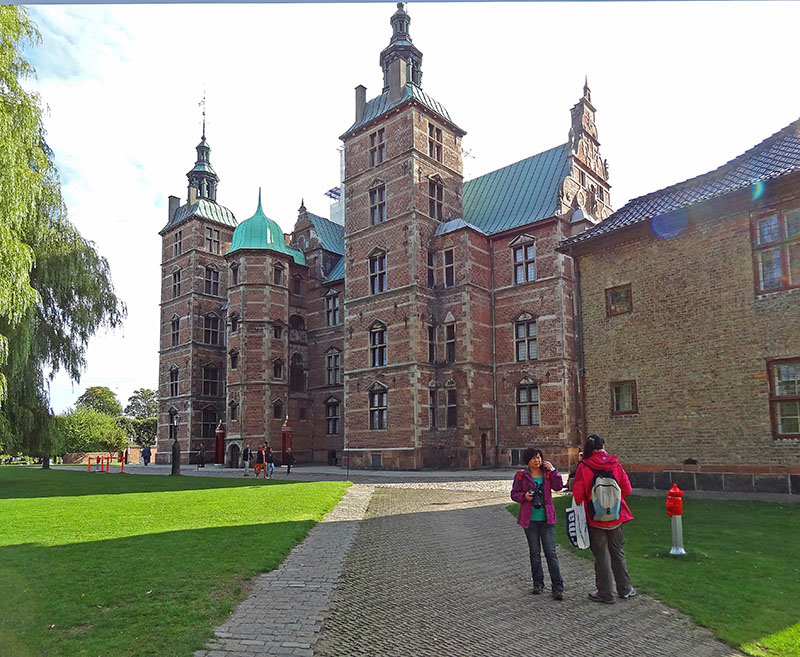 The Renaissance architecture of the Netherlands influenced the design of Copenhagen’s Rosenborg Castle, the former summer palace. Today it’s home to the Royal Treasury, which includes both regalia and jewels.

It’s the attractive parkland about it the castle that attracts most Danes to Rosenborg, however.  It encompasses a beautiful well-maintained moat around the castle, broad lawns, and a beautiful rose garden. In fact, it’s Denmark’s oldest royal garden, established in the Renaissance style by Christian IV in the early 1600’s.

Amid the garden sculptures and perfectly squared hedges, people relax and sun themselves or read a book. By and large, it’s a beautiful panorama you’d expect to only see on the Hollywood screen.

At any rate, if the weather is good, buy lunch at a nearby smørrebrød shop and join the Danes for a picnic. Be sure to put it on your list of things to see in Copenhagen. 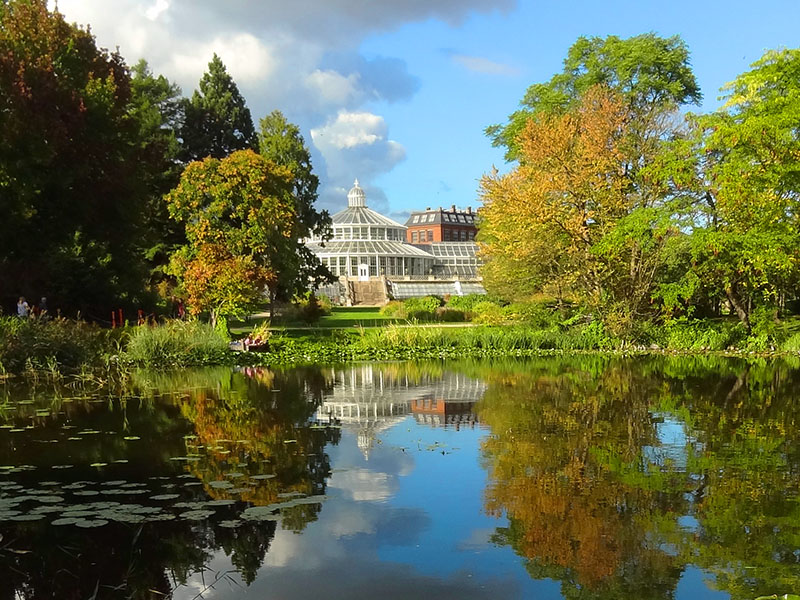 After you’ve left Rosenborg cross Oster Voldgade to the beautiful Botanical Gardens. It covers an area of 25 acres and is known for its extensive complex of historical glasshouses dating from 1874. The old Palm House is 52 feet tall and has narrow, cast-iron spiral stairs leading to the top.

Later walk back towards the city center about Central Station and Tivoli Gardens on the pathways in Ørsted Park. You won’t be able to go too far in the park, but it’s a welcome respite from the crowds. When you reach the street again just follow it all the way down to the station, a pleasant half-hour walk.

Then, if there’s time, cross the street and have a bite to eat in Tivoli. I recommend a Carlsberg and the mini- smørrebroød; it’s your call on the herring.