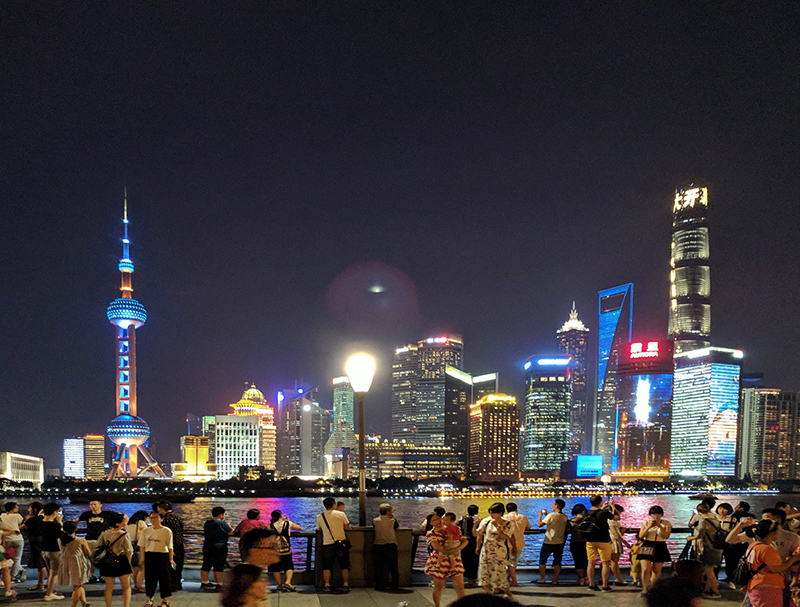 People along the Bund, one of the top 10 in Shanghai / photo Sporsy via Flickr

Before my recent visit to Shanghai, my first, the city was a bit of a mystery to me.

To be honest, what I knew of its past I learned in high school history classes and from movies. And I knew it had undergone a massive transformation in the past 25 years to become one of the most important seaports in the world, a transportation hub, and a global financial center with a population of 24 million. I’ve been to Hong Kong several times but I didn’t know what to expect when I arrived in Shanghai.

Of course, as one would expect, I did find a city filled with history. But I also discovered a modern city bordering on futuristic, reflecting the Chinese government’s effort to make it a showpiece and focal point of its economy.

The city and its many sights, especially those listed below, mesmerized me. Getting to each of them is both cheap and easy due to the Shanghai Metro system. It’s the largest in the world with 16 lines covering 400 miles of urban and suburban areas.

I won’t claim this list is definitive, but they are the top 10 places and experiences I recommend to any visitor to Shanghai. 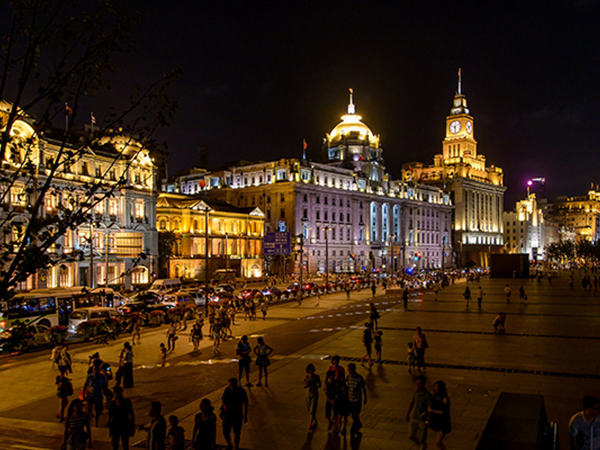 Pedestrians on the Bund / photo: Stefan Wagener via Flickr

The Bund, possibly the city’s most famous area, is a waterfront area on the bank of the Huangpu River. It’s a magnet for locals and tourists alike because of the many historical buildings along Zhongshan Road. It also provides an unobstructed view of the Orient Pearl Tower and skyscrapers across the river in the Pudong District. Here you can also take a boat tour for a view of both sides of the river.

Earlier this year the Shanghai government opened another 45 km of waterfront adjacent to The Bund. Old docklands have been redeveloped into walkways and greenbelts for running, walking and cycling featuring historical monuments and scenic views.

A visit to The Bund is wonderful during the day, but make sure you see it after sunset too. When the buildings on both sides of the river are illuminated, it’s a spectacular sight. 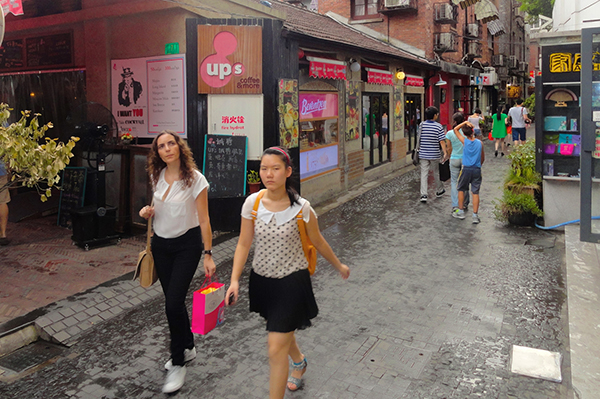 A street in French Concession / photo: Fabio Achilli via Flickr

As the name suggests, this was an area of Shanghai designated territory for a French settlement. Built in the mid-1800s, it was returned to the local government in 1943 but retained its former name.

As it was in the past, The French Concession is considered one of the premier retail and residential districts of Shanghai. It’s filled with small retail shops, restaurants and historical markers. London planetrees line its narrow side streets and main avenues, making a walking here a leafy pleasure.

Stroll along Huaihai Middle Road, and you’ll find a seemingly endless number of high-end retailers in modern malls. The malls were built to attract the growing number of wealthy and middle-class Shanghai residents.

Somewhat hidden away in the French Concession is Tianzifang, the city’s arts and crafts district. Its narrow alleys are filled with more than 200 coffee shops, art studios, craft stores, design houses and food stalls. As you’d expect, there are plenty of bars and restaurants thrown in for good measure.

There’s no denying that this enclave was designed with tourists in mind. Although prices might be a bit higher than in other areas, it’s still a great place to spend a few pleasant hours checking out its shops set in preserved Shikumen style and French colonial buildings dating back to the 1930s. It also remains a residential neighborhood, as witnessed by the laundry hanging overhead. 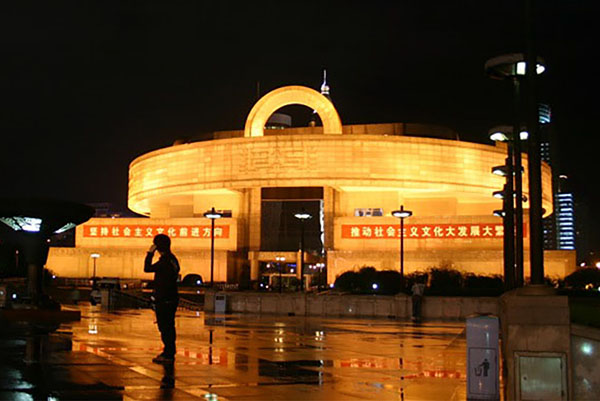 Located within People’s Square in the city’s Huangpu District, the Shanghai Museum features ancient Chinese art. It’s considered by many to be the country’s first world-class modern museum.

The museum has eleven galleries in which it displays its collection of more than 120,000 items. These include coins, jades, bronze, ceramics, furniture and Chinese and foreign art.

The museum building itself is impressive with its square base, round top and arches. Its design represents the ancient Chinese belief that the earth is square and the sky is round. The eight white marble statues of lions at the entrance are an imposing force of guards. 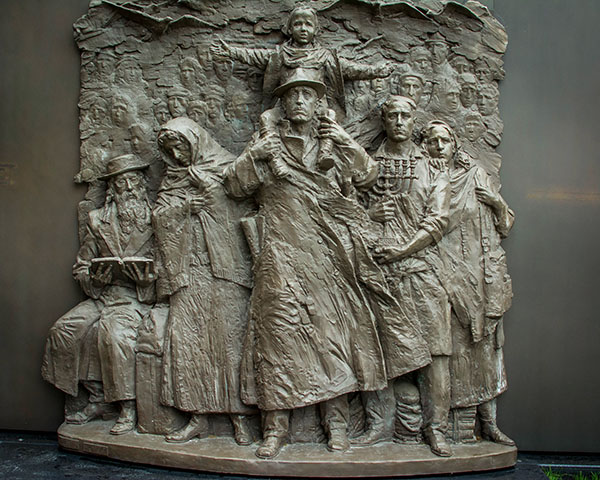 A bronze plaque outside the Jewish Refugees Museum / photo: Philip Cohen via Flickr

While most of the world turned them away, Shanghai accepted approximately 18,000 Jewish refugees fleeing Europe between 1933 and 1941. This museum features documents, personal items, films and photographs that document their lives.

The museum houses the Ohel Moshe Synagogue building, two exhibition halls and a courtyard. In the courtyard stands a 111-foot long copper wall, designed by Chinese artist He Ning. It is a memorial to 13, 732 refugees whose names are etched in the wall. Sculptures of six figures representing faith, suffering, love, determination, light and hope are also featured.

Located in what was the Jewish Quarter in the Tilanqiao Historic Area of Hongkou district, during the WW II Japanese occupation it was known as the Shanghai Ghetto. 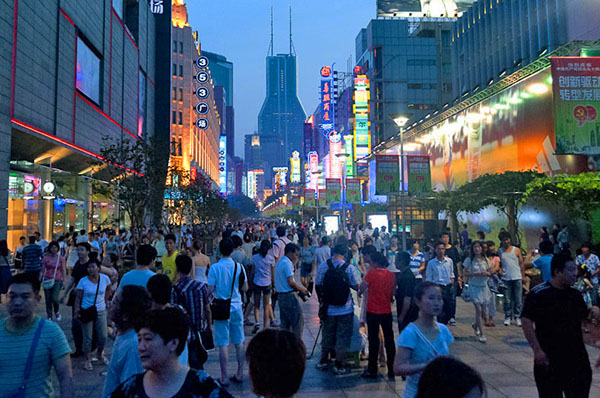 Nanjing Road in the evening / photo: jcdcv via Flickr

Nanjing Road runs about three miles from The Bund to The Jing ‘An Temple at its western end. Its Shopping District is the most famous shopping area in Shanghai and certainly one of the city’s busiest. It has a history going back more than 100 years.

The street is lined with department stores, malls and retail shops of all sizes selling almost anything you could imagine. There are also an endless variety of places to eat, featuring foods from around the world, as well as numerous quality hotels.

I hesitate to mention it, but the district is also home to the largest Starbucks store in the world. It covers 29,000 square feet and has a staff of 400. Personally, I think a better choice would be to try one or more of the many teashops throughout the city for a real taste of China. 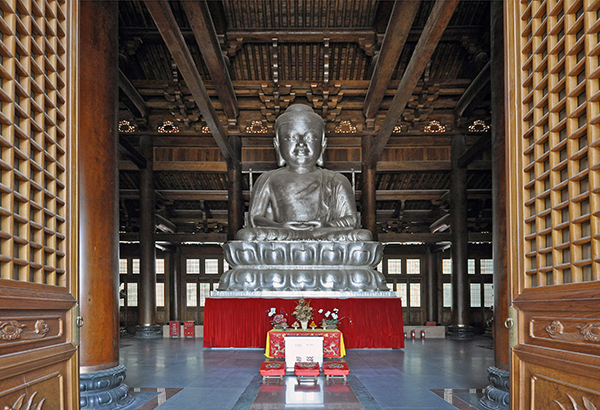 The Buddhist Jing ‘An Temple was first built in 247 AD in another area of the city. In 1216 it was moved to the current location at the western end of West Nanjing Road. I was fascinated by the juxtaposition of this ancient temple with the many modern buildings surrounding it. It really is striking.

During the Cultural Revolution in the late 1960s and early 1970s, the temple was converted to a plastics factory. In 1983 it was returned to the monks and was then renovated.

Jing ‘An means “Peace and Tranquility,” which this temple indeed is. Within it, you’ll find several halls of sculptures and artwork worth exploring. In fact, the temple buildings themselves are works of extraordinary craftsmanship.

In the Jade Buddha Hall is the largest sitting jade Buddha statue in China, at approximately 12.5 feet tall. In another is the 3.5-ton Hongwu Bell, cast in copper during the Ming Dynasty.

If you visit, be sure to bring some coins with you. In the center of the main courtyard is a three-tiered temple into which people throw coins for good luck. According to legend, the higher you place your coin, the better luck you will have in life. Be advised it’s not as easy as it looks. 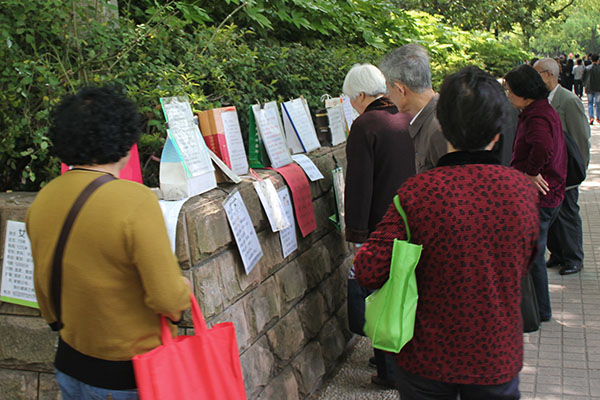 People’s Park, one of the city’s top tourist destinations, was once the site of the Shanghai Racecourse. It’s now a 24-acre oasis set among major thoroughfares with the Nanjing Road shopping district close by.

Within the park are the Shanghai Art Museum and the Museum of Contemporary Art. The Shanghai Museum, the Shanghai Grand Theater and the Shanghai Urban Planning Museum are just to the south.

Walk along the garden paths, past many people doing Tai Chi or playing cards, towards the large Lotus Pond. Be sure to check out the Antarctic stone, collected during the first Chinese expedition to the South Pole in 1982. There’s also a Memorial to the anti-imperialist May Thirtieth Movement that took place in 1925.

If you visit on a Saturday or Sunday afternoon, you’ll also find the Marriage Market, considered by many a park highlight. Here parents put out pieces of paper listing the age, height, income, education and zodiac sign, among other things, for suitable partners for their children. Often the children are unaware of the whereabouts of their parents.

Sunday is also the day to visit the “English corner. “ Here children, students and others wanting to improve their English language skills congregate to talk with foreign tourists. It is a great way to meet some of the Shanghai locals. 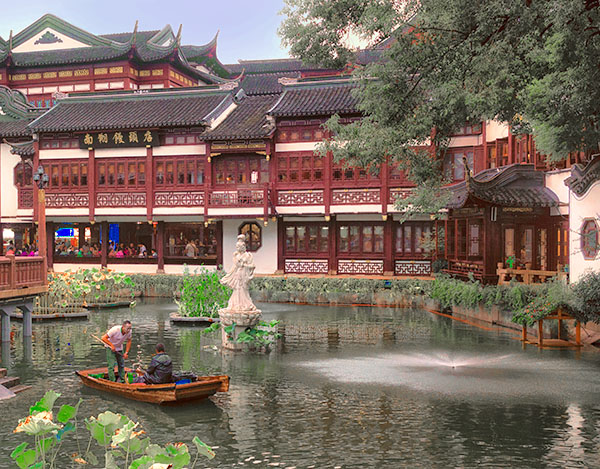 One feature of the park is the five-ton “Exquisite Jade Rock.” According to legend it was placed in Yu Garden after being salvaged from a boat that sank off Shanghai while transporting it to Beijing. 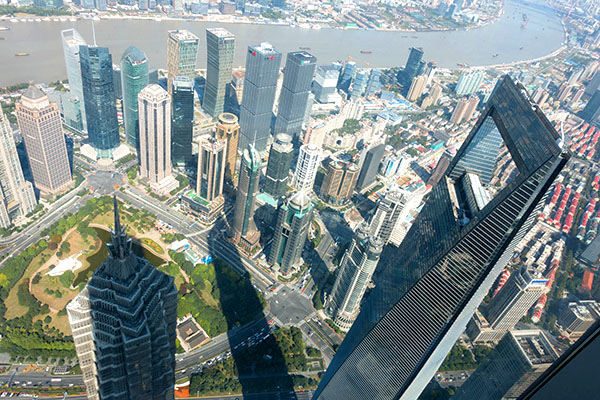 Shanghai seen from above / photo: Kent Wang via Flickr

Shanghai From Up High

As mentioned earlier, across from the Bund in the Pudong District are several office towers built in the past 25 years. Each has an observation deck, as does the Oriental Pearl Radio & TV Tower, a city landmark.

A few blocks away you’ll find the Shanghai Tower, the second-tallest building in the world with 128 floors. I found it particularly interesting because it “twists” 90 degrees as it rises from the ground to the top. Two other notable buildings are the Shanghai World Financial Center and the Jin Mao Tower, which has offices and a Grand Hyatt Hotel.

Shanghai is hot, humid and hazy in the warmer seasons and in winter smog can be an issue. So, finding a day to catch the view from one of the observation decks on high can be tricky.

From a view perspective, I got lucky on the last day of my visit to Shanghai. I went up to the observation deck on the 88th floor in the Jin Mao Tower and enjoyed a spectacular view of Shanghai. I also enjoyed the inward view down 32 floors into the lobby of the hotel. It was worth the wait.

Perhaps I should thank my coin tossed back in the Jing’an Temple.