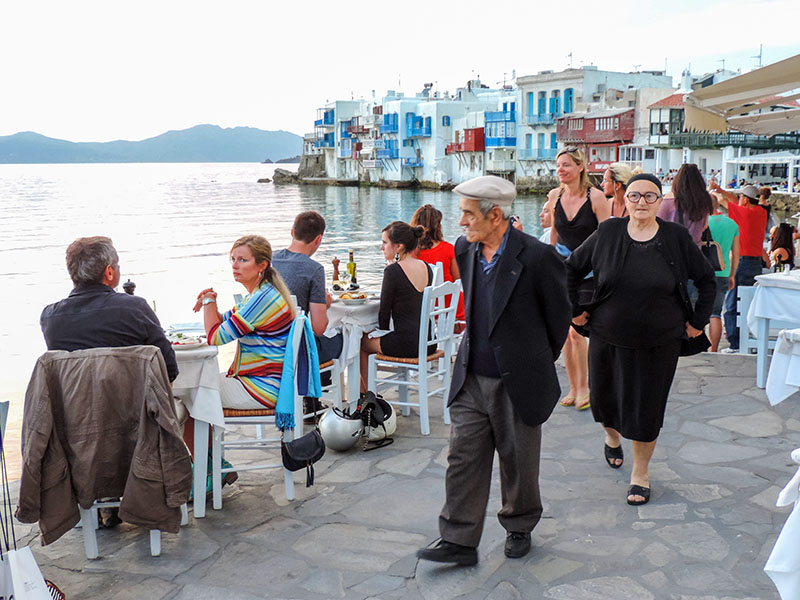 Standing near in the queue near the ferry dock after just arriving in Mykonos, we all were upset with a couple left the taxi rank and flagged down a cab 50 feet up the street. When people in line protested and yelled at the driver, he just shrugged and called back “first come, first served.” 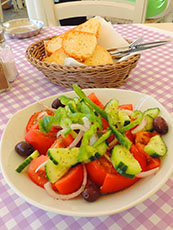 Lunch at a seaside restaurant in Mykonos

Luckily, it was the worst thing that happened to me during my three days on Mykonos.

Ironically, though, I was the lucky one only a few minutes later when the driver of the next taxi asked if there were any single riders in the crowd. When I raised my hand he told me to jump in next to him.

He charged me €7 for the few minutes it took to get to my hotel, which was a bit expensive, but he quickly compensated for the cost by giving me the lay of the land.

“The entrance to the city is there, just down that street,” he said pointing to the right as we sped along, “and your hotel is right here on the next corner. You don’t need a rental car or taxi or anything since everything is within walking distance. And if you go to the airport, it’s only a 10-minute taxi ride away.”

He had me motivated. I quickly got my key, dropped my bags in my room and set out to explore Mykonos Town.

Mykonos is part of the Greece’s Cyclades islands and although it is barren and dry, its vibrant nightlife (much of it stemming from its rise in popularity in the 1960s with the arrival of such celebs as Jackie Onasis, Sophia Loren, Grace Kelly and others) has made it one of the glitziest islands in the Mediterranean.

I didn’t travel to the Mykonos for its glitz, however, and wasn’t going to have time to travel about the island, so during my three-day stay I planned only to explore Mykonos Town, known as Chora to the locals.

Mykonos Town is picture-postcard Greece, a little dreamlike place lapped by a crystal-clear sea. It has a charming, picturesque and much-photographed port wrapped around a tiny bay near where five whitewashed ancient windmills stand as seaside sentinels. I found it much smaller than I had expected, and after having been on Santorini, only that ferry ride away, also a lot quieter. 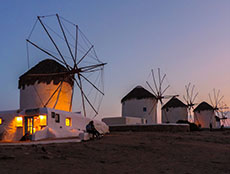 The windmills of Mykonos at dusk

More than anything I greatly enjoyed just wandering about Mykonos Town’s jumble of sugar cube-like houses and narrow alleys, designed, as they were on so many of these islands, to protect inhabitants both from the winds and pirate raids.

In the mornings, passengers off cruise ships that silently slid in during the night wander about the streets as early as 8am, although most shops didn’t open until about 10:30. Then, almost like clockwork, the town comes alive as shopkeepers drape colorful clothes on white walls all over town.

In Mykonos Town, a Museum, a Church and Little Venice

I had read about the Folklore Museum on Mykonos and wanted to see it but I had trouble finding it until I asked a restaurant owner for directions. Amazingly, he pointed out that I was standing almost right next to it. 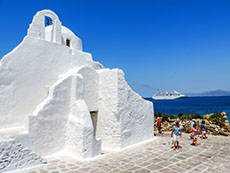 The museum was near the entrance of the harbor and I was shocked at the bad state of the building. It was closed at the time and although I went by it several times during the next two days I never found it open.

Nearby, however, was tiny Panagia Paraportiani, a famous white church consisting of four chapels, the oldest dating from 1425, the others from the 16th and 17th centuries. Both the church and the museum are on the same sliver of land as “Little Venice,” one of the most popular places in Mykonos Town.

Little Venice, officially known as Aléfkántra, is a clutch of brightly painted buildings whose balconies jut out over the sea, providing a colorful backdrop to the many bars, cafes and restaurants that line the shoreline between it and the town’s famous 16th-century windmills.

The town is so small you can’t help but pass Little Venice time and again during your wanderings and it’s de rigueur for visitors to sit at one of its little cafes and enjoy the evening sunset as the seas runs through its pallet of pastels.

The Archaeological Museum in Mykonos Town

On the other side of the port I found the Archaeological Museum, set in a Neo-Classical building. In addition to being a respite from the heat and glare of the sun, it’s an interesting place with a collection of 6th-7th century BC ceramics and Roman and Hellenistic carvings as well as artifacts from Delos, one of the most important archaeological sites in the country. 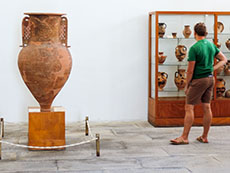 Large amphora at the Archaeological Museum

It’s a very small museum, so small that when I asked the woman at the entrance about the age of the items in the collection she left her post and took me back to show me a small pot from the 12th century BC, and also eight small objects including a mirror from the third millennium BC. The mirror had a piece of ivory around it and people would put water in it to see their reflections.

Although the Archaeological Museum was only about a five-minute walk from the crowded restaurants that line the inner harbor, I decided to visit one of the less-crowded waterside cafes near the museum. Shaded from the noontime sun by my table’s umbrella, I enjoyed the cooling breeze and a simple Greek salad. 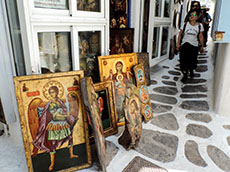 An art gallery near the harbor

It was then I wandered around the miniscule harbor – which, like Little Venice, seems to be a hub of constant tourist activity – and on the far side came across a little fisherman’s chapel. Two rocks were used as doorstops to keep the doors open and inside candles burned in front of religious artwork. Not far away I could see more religious art for sale outside a gallery.

Right across from the chapel was City Hall, with a little gelato shop next to it where the outside tables were filled with people enjoying mid-afternoon gelatos and yogurt. I made a quick stop, indulging in a delicious strawberry gelato.

A Good Restaurant, a Good Price

I spent much of my time on Mykonos meandering the whitewashed alleys of the old town. The remainder of the time was spent, as it often is, wandering about checking for good places to relax or have dinner, one of the joys of travel. 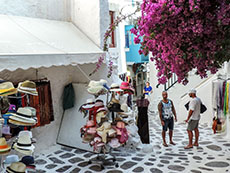 My second evening I found the restaurant D’Angelo, set in a little piazza, while walking up the main street from the seaside windmills. I remember seeing good ratings on it on TripAdviser, where many people had commented on the large and good portions, value and the friendliness of the staff.

I decided to find out for myself and after looking at the posted menu, turned towards the tables. I was immediately given a friendly greeting by a smiling young woman, who I later discovered was Canadian and was the wife of the chef, a local from Mykonos. There were six other people at the outdoor tables at the time and she offered me a conch that I found very comfortable.

I ordered a bruschetta to start my meal and when it came I found it to be so big – four large slices of bruschetta piled high with tomatoes – that halfway through I said to the waiter that it was too much food.

I laughed at first and then did as he suggested, slowly getting more into the unhurried rhythm of Mykonos life with every bite.