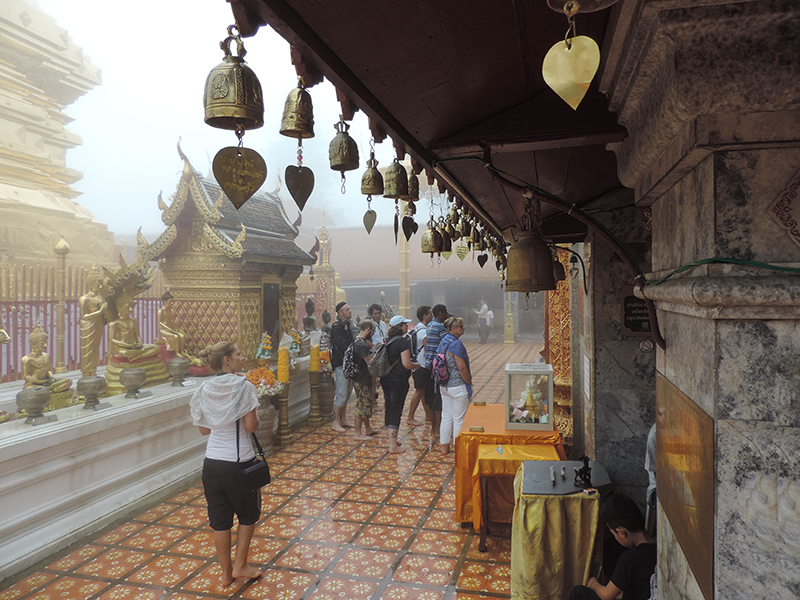 I stood there mesmerized by the scene.

In front of me, monks in saffron-colored robes sat on the temple floor, near motionless as they listened to their teacher. 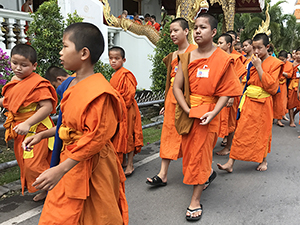 He spoke softly, and behind him a large golden Buddha looked down on the group, looking so serene as if he was also listening.

The stillness and softness inside the temple made the scene almost mystical. It was one of the hoped-for experiences that originally lured me to Asia and, specifically, to Thailand.

The temple was in Chiang Mai, a fascinating city tucked away in the highlands of northern Thailand between Myanmar and Laos. I arrived yesterday, after a three-hour flight from Bangkok, but now felt light years away from the crowded capital.

Within hours I came to love it. 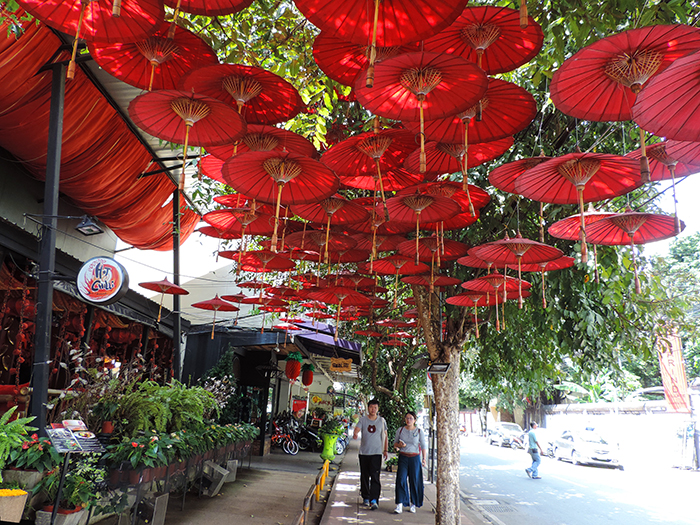 Umbrellas above a Chiang Mai sidewalk

Chiang Mai is large but in its historic center, the main draw for travelers, you find little big-city bustle. A moat surrounds the center on four sides, which diverts some traffic and keeps things relatively quiet.

It’s a city that has more than its fair share of charisma, much of it coming from the numerous ancient temples, or “wats,” that still exist there. It’s also eminently walkable, allowing you to effortlessly absorb its sights, sounds, and scents at your own pace.

Chiang Mai was long known as an inexpensive backpackers haven. But an influx of upscale hotels and restaurants has brought in more mainstream tourists. In fact, Travel + Leisure readers recently rated it the #1 city in Asia, topping Tokyo, Singapore, Bangkok, et al.

Today it lures travelers in search of more exotic experiences than found in those traffic-clogged capitals. They also find it to be a good stepping-off point for adventure tours in Northern Thailand and nearby Myanmar. 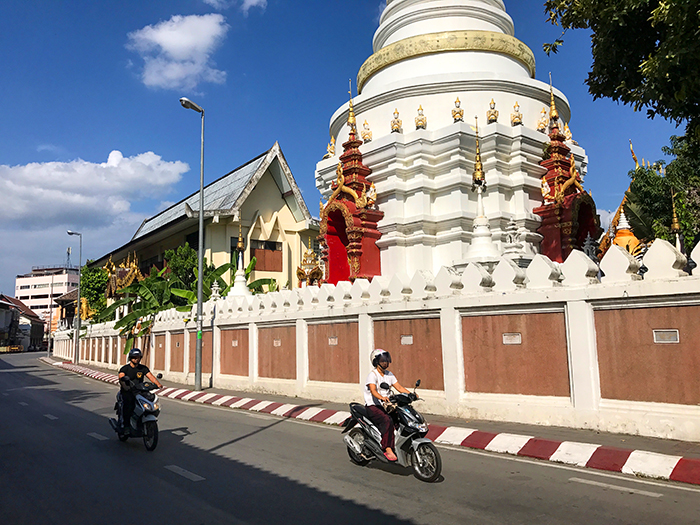 One of Chiang Mai’s many wats

There’s a lot to do in Chiang Mai and part of the exoticism of Chiang Mai is its plethora of temples, most of which are over 700 years old. (In Bangkok the oldest wats are 200). More surprising is the fact that they’ve been exceptionally well preserved.

Scattered across the old city, the space between them is now filled with houses, small hotels, and shops. Still, though, the many stupas that rise above the rooftops give the city an exotic look.

One of the most famous and revered wats is Wat Phra Singh on Ratchadamnoen Road. It was the wat in which I saw the monks seated in front of the large Buddha. It is home to several highly revered and ancient Buddha images.

You’ll find the small but interesting Wat Phan On near the center of the old city. Wat Phan Tao, built entirely of teak, was formerly a palace. I also visited Wat Buppharam, just outside the old town on Tha Pae Road. There a monk who blessed me tied a braided string around my wrist for good luck. I kept it on for the remainder of my Asian trip.

SInce you must remove your shoes before entering a wat, it makes sense to wear sandals or flip-flops. 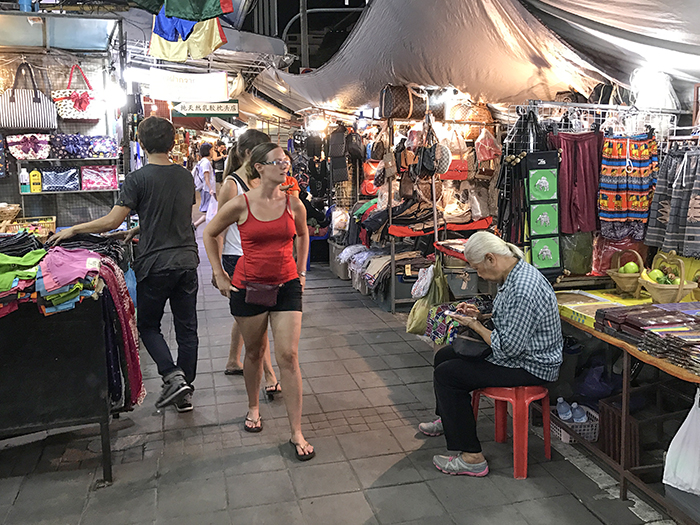 One of the popular things to do in Chiang Mai is shop. In fact, shopping is a huge reason why many visit Chiang Mai and there are many boutiques to keep them busy. There are also three very popular markets that are, of course, also crowded.

One is the Saturday Walking Street Market on Wui Lai Road at Chiang Mai Gate. It starts around 4 pm when the street closes to traffic. Although you’ll also find many silver shops along Wui Lai, you won’t find many restaurants. But if you get hungry there are plenty of food stalls all about. 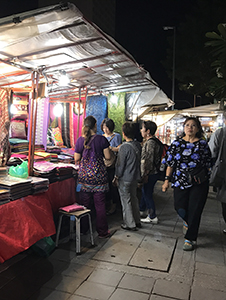 A second is the Sunday Walking Street Market that also opens around 4 pm. It runs the length of Ratchadamnoen Road, starting at the Tha Phae Gate. It’s popular for the many of the crafts created by the Northern Thai people. After dark, you’ll also find plenty of musicians, puppeteers, and Thai dancers performing. Throughout this market area, you’ll find restaurants, coffee shops and bars where you can relax and watch the passing parade.

The largest, however, is the Night Market, near the Dusit 2 and Meridien Hotels, both 5-star properties. I stayed at the Dusit 2 hotel for $127 per night, including breakfast.

The Night Market is huge. Here you find just about everything you can imagine. If you want a portrait painted, prescription filled, a massage or your nails done, this is the place to come. The sprawling bazaar fills three large arcades in several buildings, and also runs along the sidewalk out in the streets.

Be aware, however, that much of the brand clothing are knock-offs. It’s quite colorful and goes on a block after block. You’ll see vendors getting ready setting up their tables in the late afternoon. 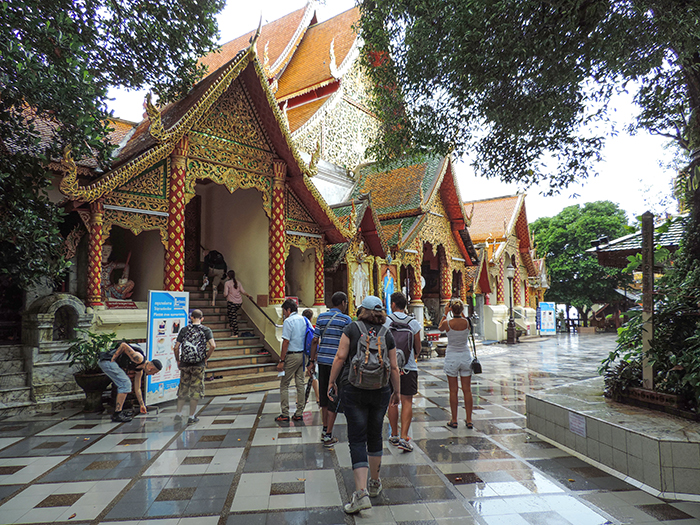 One of the Things To Do in Chiang Mai: See Incredible Beauty in a Wat on a Mountaintop

Another famous wat, Wat Phrathat Doi Suthep, is far outside the city. Perched on a mountaintop, it is an incredible place that is well worth seeing. It is one of the most important and sacred temples in northern Thailand and a Buddhist pilgrimage site.

I rented a taxi for the day to take me to the wat, and later on to the village of the Mountain tribes. (The cost of the taxi for the day, arranged through my hotel, was 1800 baht, about $54). 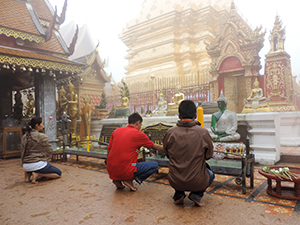 It was an overcast day, with a few showers and as we drove up the mountain, we passed many monks walking alongside the road. They were holding their pots in which they took food offerings the people. Clad only in their robes, they walked in the downpour with no umbrellas, no raincoats, no anything.

You can also rent bicycles for the steep, serpentine ride up the mountain and we passed a number of them. It was obvious they also weren’t prepared for the rainy weather.

After reaching the small village where my driver would wait, I walked to the stairs to the wat. The steps now looked like steep rapid but the rain soon abated, and I began my climb. It was a long and arduous climb up 300+ steep steps. Just 50 or so in, I started to atone for my sins, which continued for some time, step by step. Step by step.

When I finally reached the top, however, I discovered I could have taken an elevator. Ugh….

But my dismay quickly dissipated when I saw the group of beautiful temples shrouded in a soft fog. Worshippers were lighting candles and laying lotus flowers at various shrines. People knelt and prayed, while monks blessed others.

During the next hour I was joined by small groups of tourists from Scandinavia, France, and the U.S. All of us were quietly walking around taking in the entire ethereal tableaux. It was one of those things you experience just so every so often in life, and you never forget. 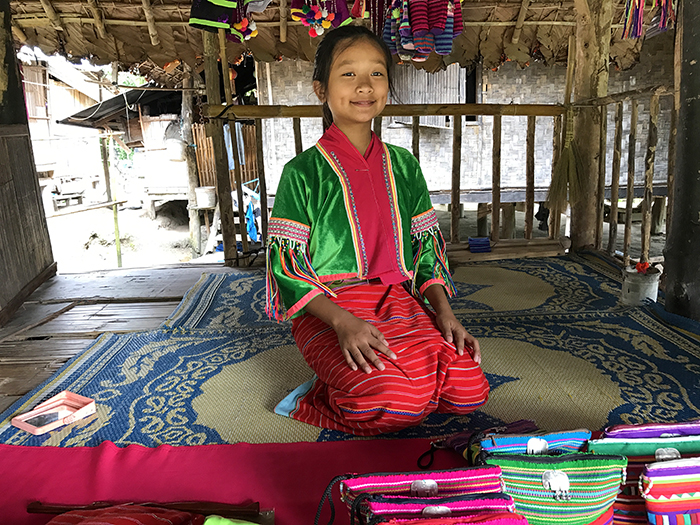 After joining my driver back in the village, we set off for Baan Tong Luang, an eco-agricultural, hill-tribes village. It was established15 years earlier to help tribal families increase their income through agriculture and the production of handicrafts. 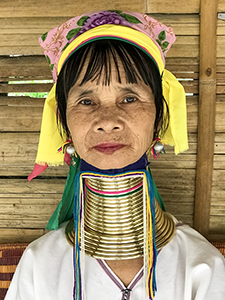 I had wanted to travel Northern Thailand’s tribal areas ever since I was a child. It was then I saw National Geographic photos of the ”long-neck” women of Thailand, wearing brass neck-rings. It fueled my curiosity.

The “long necks” I found now were members of the Padaung tribe, and here they lived in a small village. Within a hundred yards were the villages of seven other tribes. Producing handicrafts and working in the paddies and other areas, they were bettering the incomes of their families. At the same time, each was retaining his/her ancient culture.

As I wandered from one mini-village to the next, I found people, mostly women, making handicrafts outside their homes. They returned smiles as quickly as I gave them and no one asked for money for taking their photo. It’s a very welcoming place, an oasis of color between the jungle and the rice paddies you pass entering.

If you have the time when you’re visiting Chiang Mai, it’s a fascinating way to spend an afternoon.