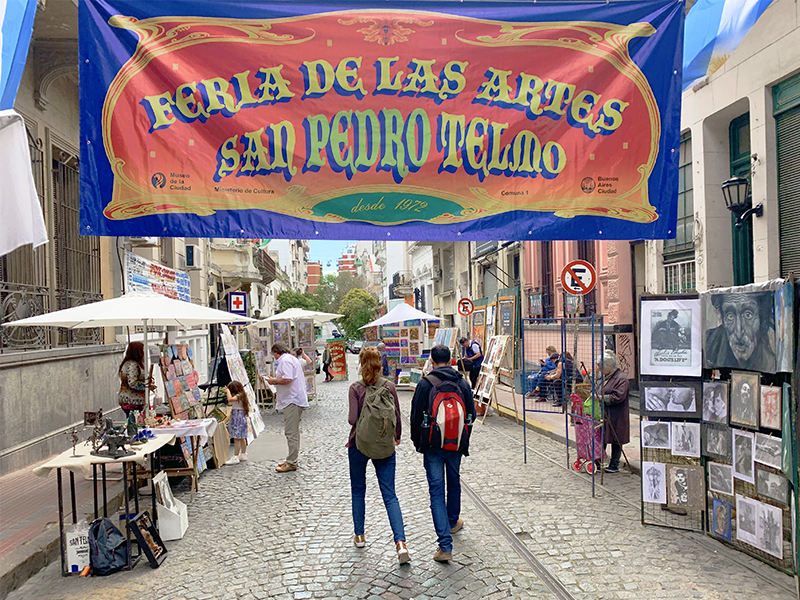 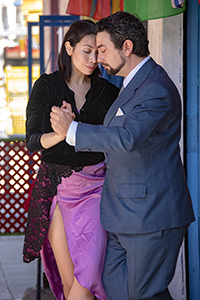 As in other major cities, there are plenty of things to do in Buenos Aires.

But what sets the Argentine capital apart from other cities is that music and tango are everywhere here, as are beautiful parks and museums and head-turning architecture. And, of course, steak. Lots of steak. And great wines.

On top of that, the porteños, as the city’s residents are called, seem to move to a different beat than those of us in the Norte. They seem to enjoy life more, evident in the way they dress and dine and dance and do just about everything.

Seemingly, many travelers from North America don’t include Argentina in their travel plans because of the vast distance involved.

But times and technology have changed and flights today are shorter and much more manageable than they were just a few decades ago. Miami to Buenos Aires is now about 9 hours, New York under 11 hours.

Better Yet: Local Time in Buenos Aires, and the Weather

A bonus when you travel to Buenos Aires from North America is that you fly north to south, minimizing dreaded jet lag. Also, the time in Buenos Aries is only two hours ahead of the eastern U.S. (it’s noon in Buenos Aires when it is 10a.m. in New York).

Since it’s south of the equator, the seasonal weather in Buenos Aires is the opposite of that of North America. Spring is September-November, summer December-February, and fall March-May. Unless you’re a skier, it’s best to travel in those periods. It’s well worth the trip, even more so if you combine it with a tour of other areas in South America.

If you do, here are my suggestions for 10 things to do in Buenos Aires during a 4- or 6-day visit.

Reminiscent of a Parisian boulevard, the 13-block long Avenida de Mayo links the Casa Rosada, where the president holds meetings, with the National Congress. It’s an elegant street lined with beautiful Art Nouveau, Belle Époque, and Art Deco buildings. Along with its broad sidewalks you’ll find historic buildings such as the Café Tortoni, the city’s oldest café, which offers both coffee and tango. Midway the 12-lane Avenida 9 de Julio, the widest boulevard in the world, intersects it. Start your stroll in the Plaza de Mayo in front of the Casa Rosada.

Although most cemeteries aren’t on must-see lists of travelers, the Cementerio de la Recoleta should be on yours. Its allure is that it’s not just a necropolis but a grand mini-city where Art Nouveau-styled mausoleums are crammed up against mini-Greek temples and grand memorials. Notably, Recoleta is the final resting places of the elite of Argentina, including the much-visited tomb of Eva Perón, where there are always flowers. Give yourself a half-hour to walk about, and then have a coffee or wine in one of the many outdoor cafes outside.

The Teatro Colón on the Avenida 9 de Julio is the pride of porteños. It’s a vast and elegant building with near-perfect acoustics and European-style décors such as French stained glass and Italian-marble staircases. Its construction began in 1889, and it took nearly 20 years to complete when it opened with Verdi’s Aida. Since then it has welcomed many prominent artists, including Stravinsky, Strauss, and Pavarotti, among many others. Guided tours are offered in English daily between 11 a.m. and 2 p.m.

Relax in the City’s Gardens and Parks

Another of the things to do in Buenos Aires is to visit its beautiful gardens and parks. The smallish park on Plaza de Mayo is the pulsating center for many national festivities such as raucous World Cup celebrations. But it’s also a quiet place to relax during a walk. Likewise visit the Carlos Thays Botanical Garden, home to thousands of plant species that are interspersed with fountains and classical statues. The nearby Japanese Garden, with its koi ponds and bright red bridges, was a gift from the city’s Japanese community to the people of Buenos Aires. While you’re on the way to either, make a stop at Floralis Genérica, a colossal aluminum and steel floral sculpture that opens every morning and closes in the evening.

The neighborhood of San Telmo is one of the oldest areas of Buenos Aires. Its cobblestone streets are lined with colonial facades of buildings that are home to plenty of old cafes, tango bars, and eclectic shops, as well as plenty of artisans and antique dealers. If you’re looking for antiques, focus on the area around Plaza Dorrego; many of the antiques you’ll see elsewhere are knock-offs. You’ll find both at the famous San Telmo Sunday market (see below).

One of the most popular things to do in Buenos Aires is to visit the Feria de San Telmo, one of the best-known markets in the Americas, as well as one of the most popular attractions in Buenos Aires. While its center is the antique market on Plaza Dorrego, it has also become a flea market. With many artists and dealers, it spreads out into the surrounding streets. It’s fun and colorful, and you’ll find plenty to see and do here. It’s open every Sunday from about 10am to 4pm. Just be careful of pickpockets.

Another of the things to do in Buenos Aires is to visit the Barrio of La Boca. (Its name means “the mouth,” a reference to its location near the Río de la Plata).  Just continue walking south from San Telmo, and you’ll enter one of the most colorful areas of the city. The tango was born here and on weekends you’re almost guaranteed not to leave without seeing a street tango.

La Boca was the city’s first port as well as an African slave colony. In the late 19th century the area became home to many Italian immigrants, some of who settled in the area known as El Caminito. The corrugated metal houses they built, which are still occupied today, were covered with whatever leftover paint they could find, making the area a riot of color. You’ll find plenty of shops, cafes, and restaurants here. Stop for lunch in one of the local restaurants, some of which serve up a free tango show with your meal.

Today the neighborhood of Palermo, Buenos Aires, is the poster child for everything that is chic in the city. Palermo is a reasonably large area divided into three sections: Alto Palermo, Palermo Chico, and Palermo Viejo.

It’s in Alto Palermo where you’ll discover parks, such as the Carlos Thays Botanical Garden and the Japanese Garden. Near the mansions, in Palermo Chico you can visit the Museum of Latin American Art of Buenos Aires (MALBA). And in Palermo Viejo, you’ll become immersed in local color and flair, including many boutiques, bustling cafés, and bars. Many of the hotels in the area are modern and modish.

Argentina is carnivore country, so if you like beef, you’ll be in nirvana here. So one of the best things to do in Buenos Aires is to find a steak house. The city is chockablock with them, all serving some of the best steaks you’ll find anywhere on earth.

Everyone, of course, has their favorite. Mine is Don Julio in Palermo, although some locals deride it as being too touristy. It’s an old-fashioned place where both the food and the ambiance are excellent. It can also take most of your meal just to read the wine list. One caveat is to reserve in advance. It’s always full and waits can be hours long (but they serve you Champagne to help the time pass!).

Take A Day Trip to A Gaucho Ranch

Another of the best things to do in Buenos Aires is not to spend your entire time in Buenos Aires. During a recent visit, we opted for a tour to a gaucho ranch. It was near San Antonio de Areco, a small town on the pampas. A major Gaucho Festival is held there annually in November.

It was an interesting tour, which began with a visit to a small silver museum and workshop. It was worthwhile, however, since it was upscale and authentic. And we did have the opportunity to buy quality goods at the source.

We had a good meal of steak and vegetables cooked by the Gauchos, followed with entertainment by them. For a full- or multi-day trip, opt for horseback riding with the Gauchos on the pampas.

Another popular tour is to San Isidro, including a cruise around the canals and islands of the Tigre Delta.