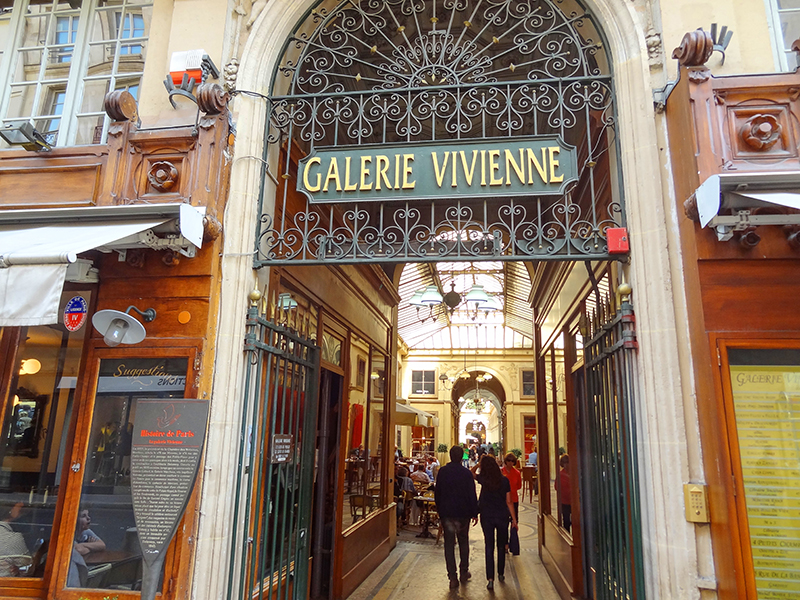 Hidden passages of Paris, such as Galerie Vivienne, are beautiful

Around Paris, there are several hidden passages and once-ornate galeries. They are calm oases in the midst of the bustling city. All are also quite interesting to visit as you walk about the city.

Each is a hamlet within the city, a boutique- and bistro-lined private street, with a glass ceiling to allow light in. In fact, they are reminiscent of Arab souks, and are the predecessors of modern shopping malls. 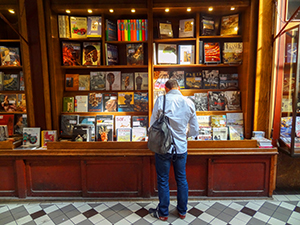 A bookstore in Galerie Jouffroy

The Golden age of these covered passages was in the late 1700s. At that time they provided a respite from the weather and unsanitary conditions that plagued the streets.

Originally, there were around 150 or so of these hidden galleries in Paris. But when a new plan for Paris – complete with broad boulevards and sidewalks – was developed in 1860, many were demolished.

Regrettably, only 20 or so covered galleries of Paris remain. Most are off beaten tourist tracks around the Eiffel Tower, Notre Dame, and the Left Bank. Some are upscale, while others have seen better days. But for the most part, they’re all interesting. And they provide a glimpse into a Paris of centuries ago.

Here are the four most interesting covered galleries of Paris, which you’ll also find to be most accessible. 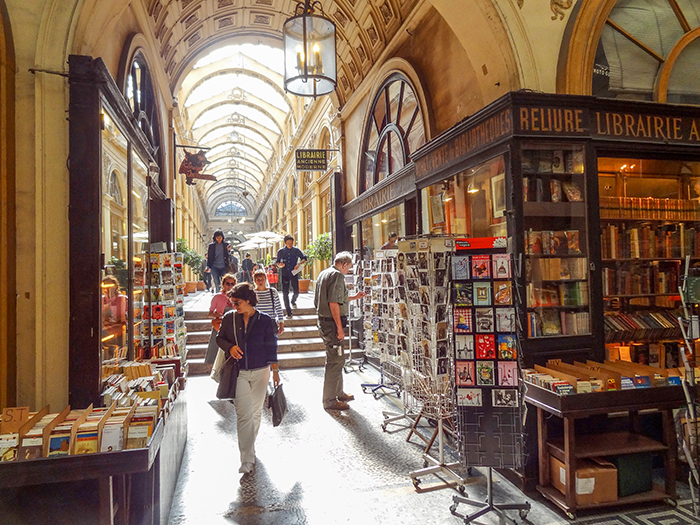 One of the first covered passages in Paris to be restored, Galerie Vivienne today it is one of the most popular. Located not far from the Palais-Royal, Galerie Vivienne is the most ornate of the galleries. For this reason if you only have time to see one galerie, this should be it.

Enter off Rue des Petits-Champs. (Look for the tony Bistrot Vivienne flanking both sides of its entrance.) Once inside you can’t help but admire its neoclassical mosaic floor, which only adds to the allure of the passage.

There are other little bistros and brasseries inside along with some upscale boutiques on its several passages. One favorite shop is Librairie Jousseaume, a bookstore that offers both modern and rare old books. It was one of the original tenants when the gallery opened.

Another of the hidden galleries of Paris, Galerie Colbert, runs parallel to Galerie Vivienne but has none of its panache. 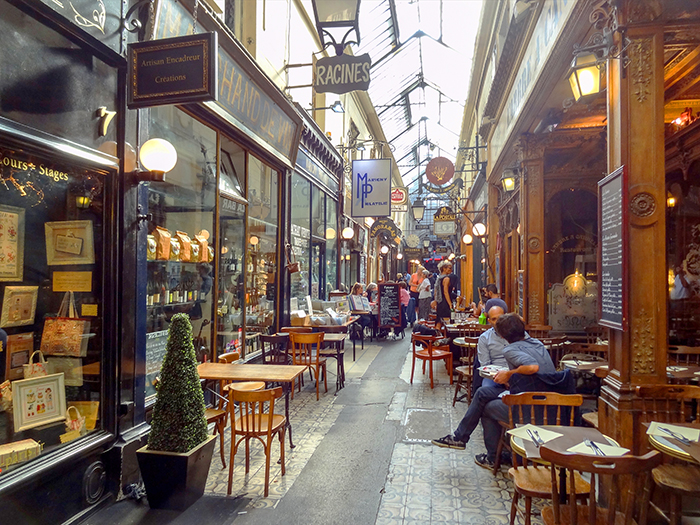 A few blocks away on Rue Saint-Marc is the oldest remaining covered gallery of Paris, the 1799 Passage des Panoramas. Panoramas doesn’t have the elegance of Vivienne. Instead of chic boutiques, you’ll find hairdressers, small studios and the like. There are several shops for philatelists, another shop selling antique postcards, along with some clothing boutiques. It’s only about a dozen feet wide, less when the Bistrot des Panoramas moves its tables out into the passageway.

While much smaller than Galerie Vivienne, it also has several little places to eat. Most noteworthy is the restaurant Passage 53, part of Relais & Châteaux, the luxury restaurant and hotel association. A tiny place with only nine tables, it’s in the middle of the passage behind white curtains. A sign outside simply states “Menu Déjeuner €60, Menu Dégustation €130.” It has no menu – after you take your table, you just wait and see what arrives on your plate. 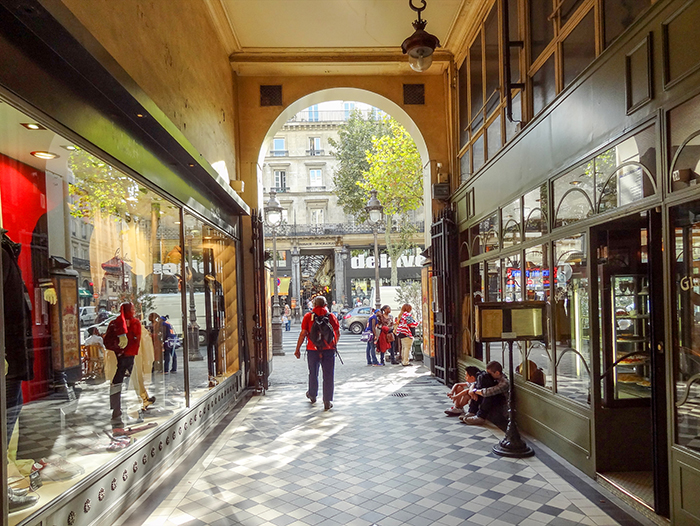 Directly across from Passage des Panoramas is the Passage Jouffroy; when you enter you immediately notice the difference. Jouffroy is much larger than Panoramas and without the tables tumbling out from the bistros and cafés blocking your way.

You’ll also see the entrances for two hotels, one a Best Western, the other the two-star Hôtel Chopin. The Chopin was where composer Frédéric Chopin had his amorous liaisons with author George Sand. At the far end of the galerie, it was renamed in Chopin’s honor in 1973.

Built in 1847, Passage Jouffroy was one of the first hidden galleries of Paris to have heated floors. Consequently, it became a comfortable place to enjoy a glass of wine or absinthe on a chilly winter afternoon. In addition to the hotels, it houses an assortment of other tenants including a secondhand bookstore and a dollhouse shop. There’s also an antique cane store with the largest moose antlers I’ve ever seen in my life above its entrance. In addition, there’s a gourmet candy store, clothing shops and the Musée Grévin, the 9th arrondissement’s answer to Madame Tussauds.

Follow the passage left at the Hôtel Chopin, and you’ll find more upscale bookshops and galleries along its length. 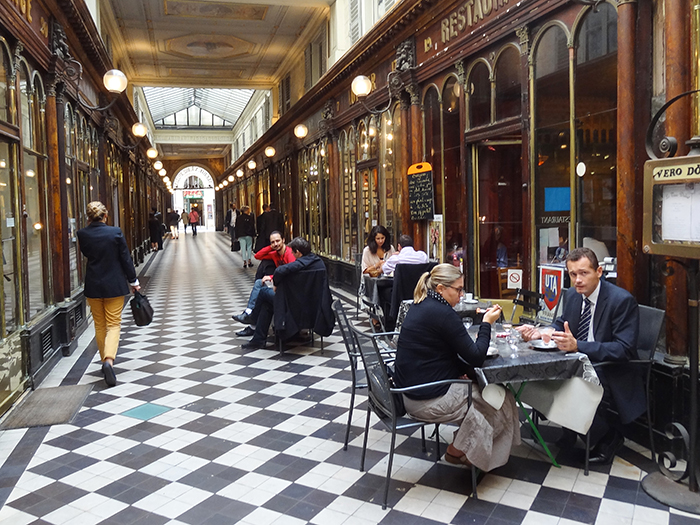 Built in 1826 and restored in 1997, Galerie Véro-Dodat is the fourth of our hidden passages of Paris and is within easy walking distance of the Louvre. It’s a fine neoclassical-style gallery with marble columns, frescoes and a black and white tiled floor, that’s not particularly long.

It’s a quiet place, best known for its antique stores. It also has several upscale art galleries and boutique shops selling musical instruments and leather goods. In 1830 it was one of the first galleries to be provided with gas lighting.