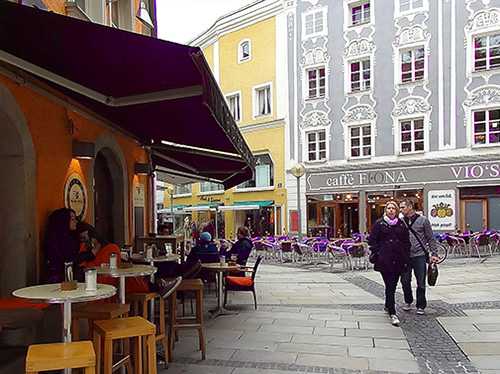 Like most travelers, I arrived in Passau via the river.

Standing on the deck of Grand Circle Cruises’ MS River Harmony early on a quiet October morning, I was looking at the smoke wafting from the chimneys of little houses along the shore as we slid silently along the Danube. 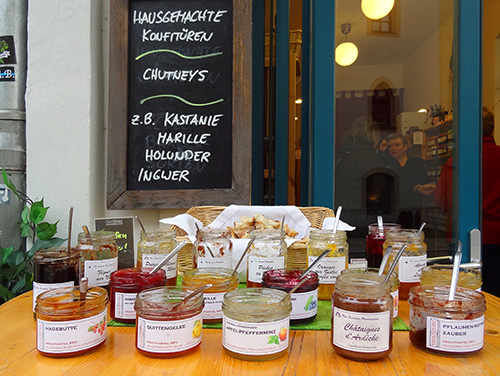 A sampling table at a chutney shop on Rindermarkt

And just as we crossed the German-Austrian border there it was, a little Bavarian city clinging to the riverbank, postcard-perfect in the light autumn haze. But it wouldn’t be until I stepped ashore that I’d experience the extent of its Old-World charm.

After we docked I joined a small tour group from the ship and walked over to the town’s Rathaus, the old Gothic city hall, which had been cobbled together from eight patrician houses. Passau was founded by the Romans, our guide explained, and was an important trading point due to its location at the confluence of the Danube, Inn and Ilz Rivers. 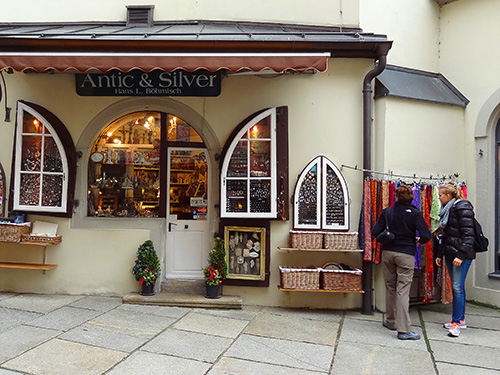 An antique and silver shop on Rindermarkt

After looking at the high-water markings on the exterior of the Rathaus, however, it soon became apparent that the location proved not only strategic but also problematic since this confluence also resulted in major flooding over the centuries. (The highest occurred in 1501 and the latest just this past June, although everything has returned to normal now).

The Rathaus is a focus point for tourists in Passau (there’s a beautifully painted Assembly Room inside that you can visit) and many tours seem to start here. Outside I saw a young tour guide dressed as Empress Elisabeth of Austria, also known as Sissi, who passed through Passau on her way to Vienna to be married to Franz Joseph I. Later that day I saw her with a group of young students in the Residenzplatz. 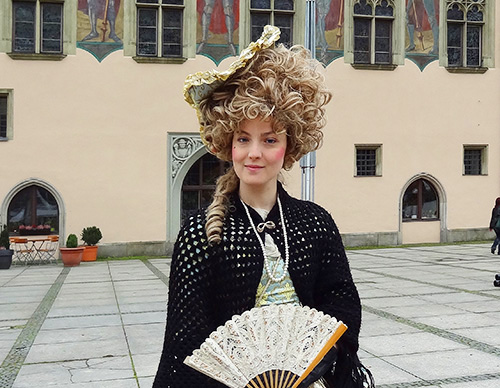 A tour guide outside Passau’s Rathaus

Our little group, which was not really on a tour but only being given a quick orientation of the city, soon headed off to the Residenzplatz and St. Stephan’s Cathedral. Baroque St. Stephan’s claim to fame is its huge pipe organ, which with 17,774 pipes is the largest in Europe. Although you can attend half-hour public recitals at noon (Monday – Saturday, May – October), on the day of our visit the cathedral was closed for renovations. From here our group was turned loose on our own and I headed across the platz in the direction of what appeared to be an old and interesting part of town.

I was only a block or so away from the Residenzplatz when I passed St. Paul’s, a smaller less-ostentatious church, and I entered a little chapel for a quick peek, thinking it was part of St. Stephan’s. When I exited I walked through a small arcade and found myself on Rindermarkt, a quaint Old-World street. The entire area, with its archways and alleyways had a medieval feel to it. 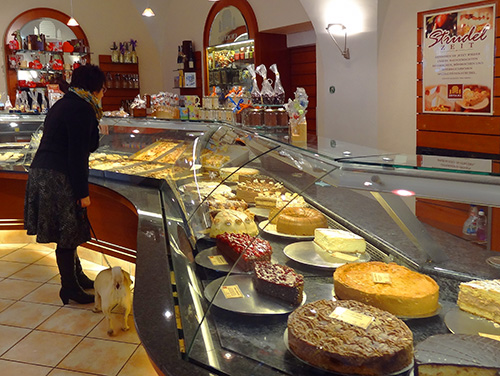 It was one of the prettiest parts of Passau, lined with multicolored buildings and little stores and shops (including a chutney shop with a sampling table out front), bakeries (with a large variety of cakes and strudels), and cafes (the funky little Café Bar Centrale, filled with all sorts of stuff, seemed to have been snatched right out of the 19th century). Like a platoon of Pied Pipers they all enticed me up the street and I meandered in and out of them for an hour or so.

There were a number of other things I could have done in Passau ­– visit the Veste Oberhaus (the former castle of the prince-bishops and now a regional museum), the well-regarded Passauer Glass Museum, the Old Bishop’s Residence, etc.) but I decided instead to just continue my aimless wandering. 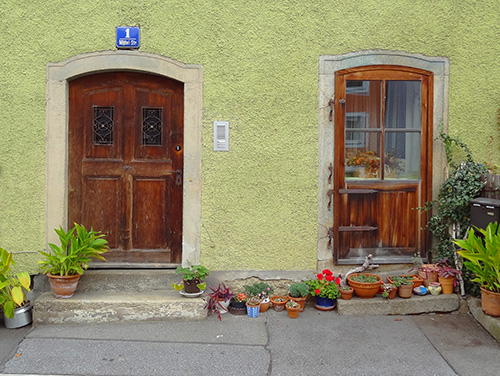 When I finally turned back in the direction of the ship, after a few blocks I came across Höllgasse, a narrow lane that paralleled the river. A line of multicolored painted cobblestones running down the center of the lane had caught my eye and I decided to follow them back towards the Rathaus.

With artist shops and galleries all along its way, It soon became apparent that Höllgasse was the artistic center of Passau, and it was quite fascinating. Some of the works of artists were actually hanging over the center of the street, several in little frames. 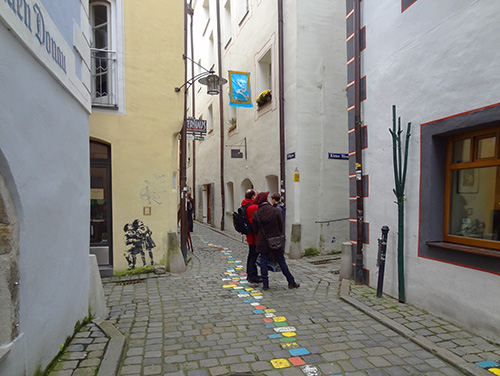 There were no cafes there, or bakeries and bars like I saw on Rindermarkt. But there weren’t any crowds either. Just a few couples sauntering along, popping into different shops and galleries along the little lane.

I took my time sauntering as well, mostly window-shopping, enjoying a quiet stroll in the fall afternoon sun. Just me and a line of colorful cobblestones.