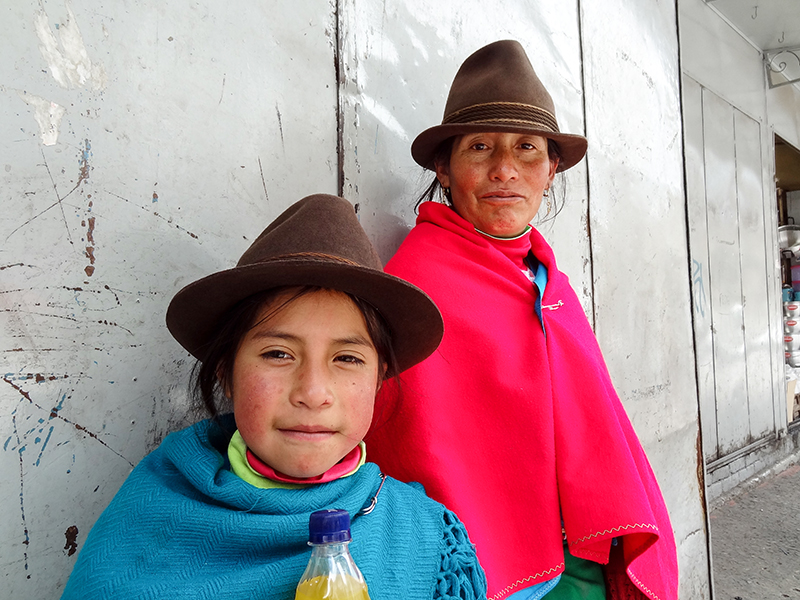 A mother and daughter near Plaza San Francisco in Cuenca, Ecuador

I’ll always remember Cuenca, Ecuador, as the place where I ate guinea pig.

I know that likely sounds horrific to many people. But it wasn’t the little rodent-like animal kids keep as pets here in the Northern Hemisphere.

In Ecuador, they’re raised as livestock, much as hogs and cattle are raised elsewhere in the world. And they’re larger than their northern cousins. They’re part of the Ecuadorian food culture and are pretty much readily available almost everywhere.

And in case you’re wondering…yes, it did taste like chicken. 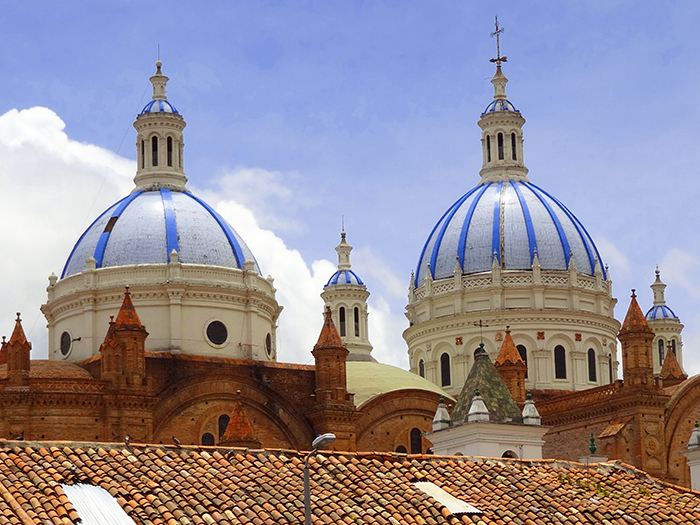 Domes of the Cathedral

But that culinary event isn’t what endeared me to Cuenca. What enchanted me is Cuenca’s delightful mix of European and indigenous cultures.

8,400 feet up in the Andes in southern Ecuador, I didn’t expect to find a city with a wealth of 16th-century Spanish-colonial architecture and an indigenous population that continues its old way of life, with women wearing their traditional Panama hats and brightly colored shawls.

It’s a city paused in time, likely preserved by its geography, since mountains surround it on four sides. It’s not an easy place to get to unless you arrive by air. It is, however, well worth the trip.

As one might expect, Cuenca is a UNESCO World Heritage Site. Luckily, tourists haven’t yet overrun it, one of the likely reasons it’s attracted such a large American expat population. 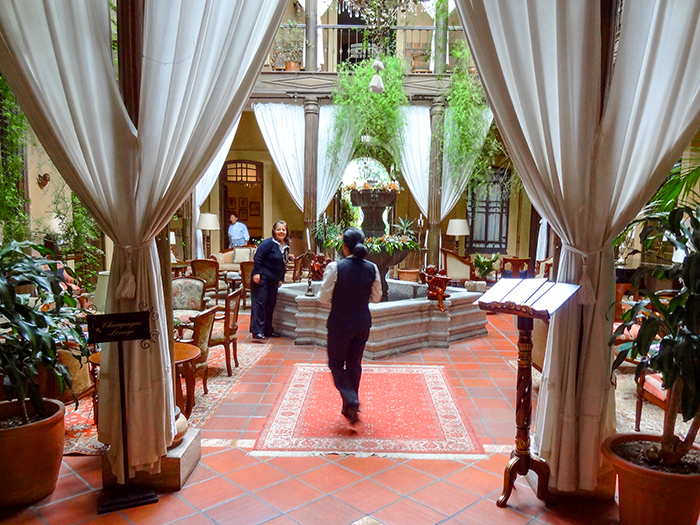 My wife and I traveled to Cuenca, Ecuador as a side trip on a visit to the Galapagos.

We booked a stay at the Mansión Alcázar, a small, 14-room, boutique hotel right in the oldest part of town. Unknowingly to us, it was the beautifully restored home of the late Ecuadorian President Luis Cordero. Some consider it to be the most beautiful hotel in the country.

Most of the Alcázar’s rooms surround the former interior courtyard of the historic building. There, flanking a small fountain, are couches and chairs and a baby grand and harp off to the side. 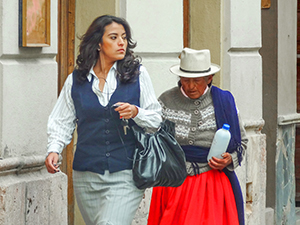 Two generations on a sidewalk in Cuenca

There are antiques throughout the hotel, and the whole place oozes intimacy and historic elegance. When we arrived, we found a four-poster bed in our room with rose petals strewn on and about it. By some quirk of fate, we had the run of the place since we were the only guests that evening.

My wife wanted to finish her book, so I headed out to wander around the area outside the property. When I returned an hour or so later, I found the entire lobby-courtyard lit only by candles. I felt I had stepped back in time.

That evening we went to the hotel’s restaurant and found that half of it was in a small glass-enclosed arboretum. We opted to dine there – what hedonist wouldn’t after the candlelight- and rose-pedal treatment — and found a brazier of glowing coals warding off the slight chill in the evening air.

We were at our table only three or four minutes when a maid approached our table. She asked if we’d like to have our bed turned down, and hot water bottles put under the covers. Only halfway through perusing the gourmet menu, and already we were feeling like the King and Queen of Cuenca. 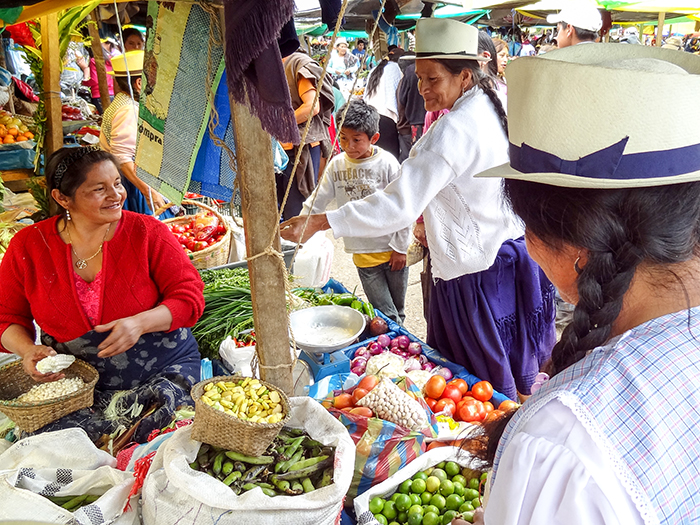 An Orchid Farm and A Colorful Market

The next morning Cecilia, our guide, took us through the area around Cuenca. We visited Ecuadorian Orchids, an orchid farm. Although I expected it to be a bit boring, it actually turned out to be quite interesting.

There are more than 30,000 species of orchids worldwide and, remarkably, the farm was working with 14,700 of them. 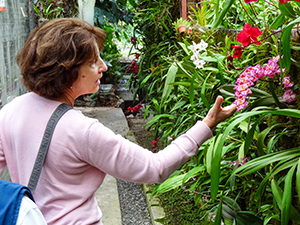 On our private tour, we learned how the farmers were developing new varieties for growers all over the world. It was an interesting hour wandering about admiring the beautiful little blossoms. Just as captivating was listening to the workers answering our many questions. The farm and tours of the facility are inexpensive.

Cecilia also took us to visit the market at Gualaceo, an hour’s drive outside of town. It was a typical Ecuadorian market filled with people from the surrounding villages, all there to sell their goods. Filled with vegetables and handmade products, it was a riot of color with Ecuadorians in Panama hats and bright clothing. It was also much more authentic than the better-known market at Otavalo, which has become known as a tourist trap.

A later visit to Cuenca’s downtown market, where I had my little guinea pig feast, proved much less attractive. 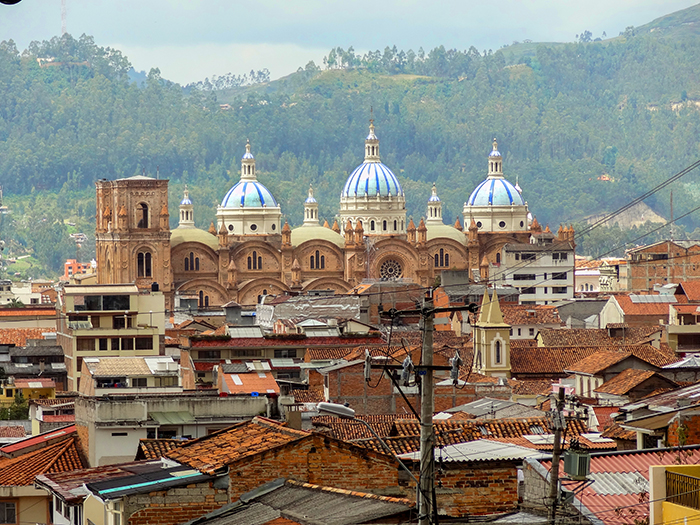 A view across Cuenca to the Cathedral

A Mix of French and Spanish-Colonial Styles

The next morning we continued to explore Cuenca. We quickly found ourselves intrigued by the city’s beautiful buildings, an unusual combination of French and Spanish-Colonial styles.

Cecilia explained that the French style began to take root in Cuenca about a century earlier. It was a time many people ordered merchandise for their homes from France.

But it all came at a price, she explained, since there was a lack of roads at the time. Everything from the outside world had to be carried across the 13,000-foot mountain range on the backs of the indigenous people. It was a journey that took anywhere from 15 days to three months. Even the first motorcar in Cuenca had to be disassembled on the coast and brought in piece by piece. 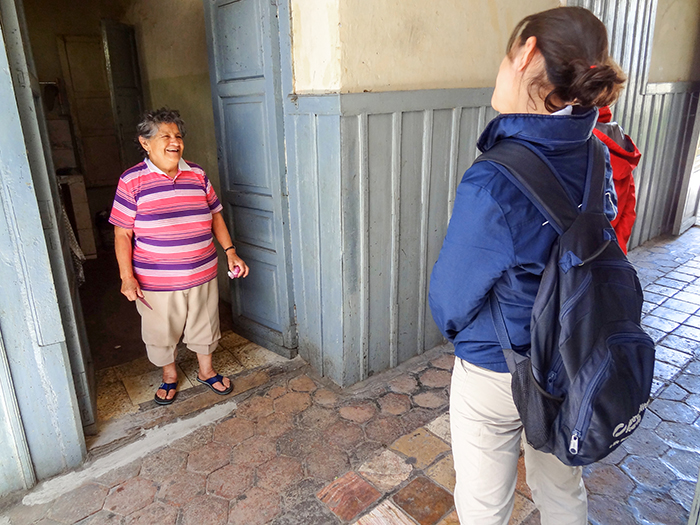 Later on, as we were walking along the street in the “indigenous section,” as Cecilia called it, we found buildings only one story tall and completely devoid of windows. From the street narrow hallways led into little courtyards surrounded by small, windowless rooms in which different families lived.

We poked our heads into one hallway and asked if we might enter. A woman and her teenage grandson quickly invited us in to join them. We were soon chatting and learned that the house, inherited it from her grandmother, was over 400 years old. When she learned we were Americans she proudly told us she had two children living in New York. 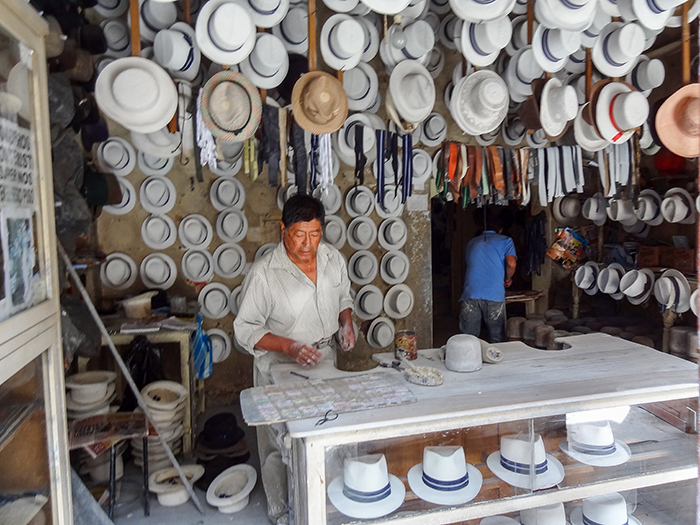 A hat maker in Cuenca

Touring the South Side of Cuenca, Ecuador

We continued walking through the south side of the city, where entire blocks are dedicated to different businesses. We soon found ourselves in an artsy area, with little shops filled with interesting and colorful crafts.

A few minutes later we were walking through the “barbershop area.” Then it was on to the area filled with Panama hat-shops, which catered only to the locals. Soon after we were in the “embroidery area.”

We stopped in a little embroidery shop and watched the woman and her husband embroider various clothing. One of the things she was most proud of, she happily showed us, was her embroidery on children’s clothes. She creates them for the Pase del Niño Viajero, the children’s traveling Christmas-Eve pageant, considered the best in Ecuador. 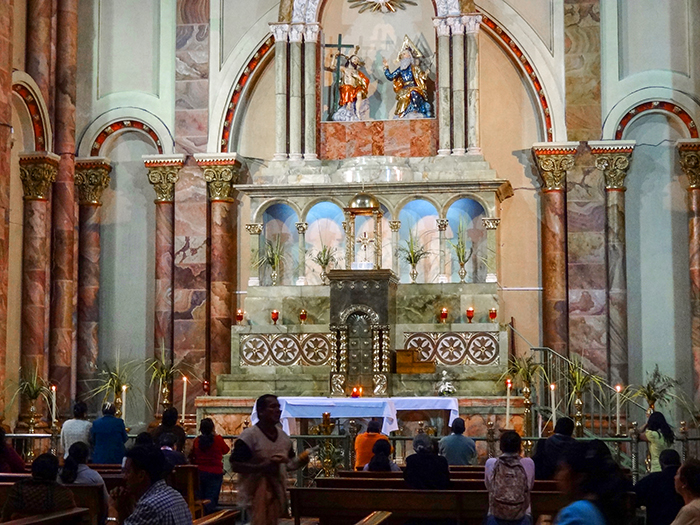 A side altar in the Cathedral

Cuenca’s Cathedral is an enormous structure and the fifth largest in Latin America.

A local artist created much of the stained glass in the church, which is captivating to view. Fascinatingly he integrated many of the local influences into his works. Over one altar, for example, the Virgin wears a shawl of the type seen on women throughout Ecuador. Another panel incorporates the sun and the moon, a nod to the original indigenous people. Still, another depicts native women praying. 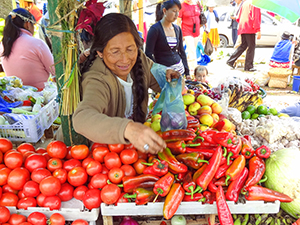 Some other panels, which accentuate the Gothic elements of the building, were imported from Belgian and Germany.

Across the street from the cathedral the city’s main square, designed in a French style, stood out from the Spanish architecture about it. It is beautifully laid out with benches along the walkways, and flowers and trees all around.

It’s a place you can relax all day, and is strikingly different from other city squares spread about Cuenca.

It’s apropos, though, since Cuenca, Ecuador is so different from many other South American cities.

Keep your fingers crossed it remains so.