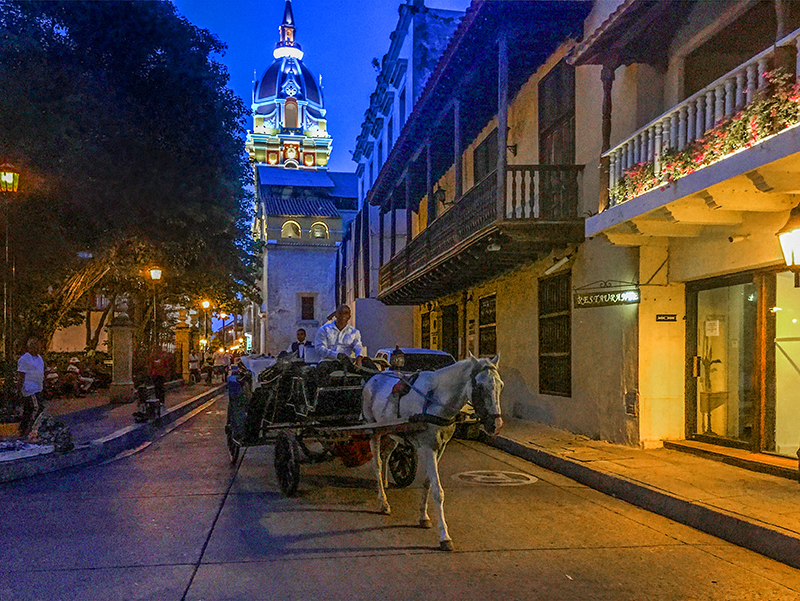 Every so often travelers discover a place that’s so different and beautiful that it’s almost magical. And when it’s also so affordable and close to home we can’t help but wonder why we hadn’t visited before. Welcome to Cartagena…

Located on the northern Caribbean coast of Colombia, it’s a mesmerizing little city where buildings flaunt a hundred Crayola hues and flowers cascade from balconies that jut out above narrow lanes. 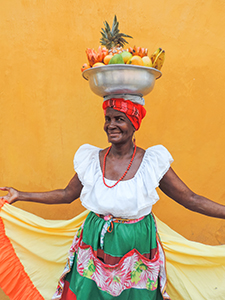 It’s a beautiful and romantic place, where you find street vendors, some wearing the colorful dresses of their slave ancestors, tucked away everywhere.

Every day, as evening drifts in, the gates in the old city walls close to vehicular traffic. Then the streets fill with people, and the cobblestones resonate with the clip-clop of horses pulling their carriages. All in all, almost magical.

Recently, I spent three days in Cartagena, which turned out to be the perfect amount of time to relax and explore.

An amazingly city rich in historical and cultural attractions, it has plenty of good hotels, both chains and independents, and a smorgasbord of excellent restaurants.

What’s more, perhaps even incredibly so, is that it’s safe and inexpensive (more about both later on). Also, it’s closer to Miami than some popular Caribbean islands.

A Trip On a Whim

I decided to visit the city only a few days earlier after I saw a sale fare to Cartagena from Ft. Lauderdale on JetBlue. Impulsively, I booked it and then researched hotels. 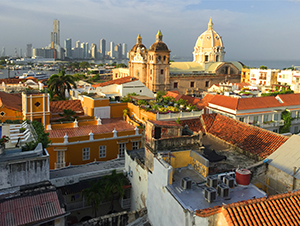 Morning view from the rooftop of the Movich Hotels

There were plenty of hotel options, especially outside the old walled city in Bocagrande, a little ribbon of a peninsula that runs along the seashore down to the Hilton at its end.

But I wanted to stay in the old city since I was more interested in the city’s history and culture and wanted to visit some of its old restaurants.

The Movich Hotel Cartagena, a 32-room luxury hotel was a good choice since it was well located. It also provided a spectacular view of the city from the bar and pool on its rooftop. 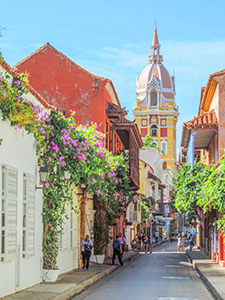 A street near the Cathedral

What one needs to do in the city’s old town, probably more than anywhere else, is to throw away the guidebook. Cartagena is the type of place where it’s best just to ramble aimlessly. This allowed you to better appreciate the “wow” factor of its colorful crisscrossing streets.

Tourist maps can also be quite misleading. They make the historic part of the city, the main draw for travelers, look larger than it is. In reality, the walled city is so compact it doesn’t take you much time at all to walk across it. On the other hand, I constantly was sidetracked by scores of interesting things I found along the way.

Be aware that it gets hot in Cartagena, and the humidity is always cranked up to high. So it’s best to do your sightseeing in the morning before the sun rises high in the sky. Then you can take advantage of the sidewalk shade as you wander. 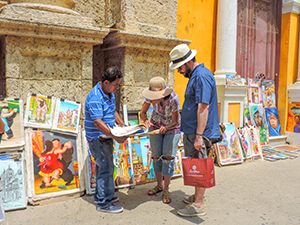 Art vendor alongside the Cathedral

The Plaza de Bolivar, a picturesque shaded park, was right around the corner from my hotel. It was originally named the Plaza de Inquisición, for the Palacio de la Inquisición that dominates one of its sides.

Each night there was an impromptu folk dance in the park. Loud and colorful, it attracted little crowds of people who tossed pesos into the passed hat after the performance.

Bolivar Plaza sees plenty of people during the day, as well. Everywhere, vendors sell everything from paintings, jewelry and sunglasses to watermelons and water.

Palace of the Inquisition 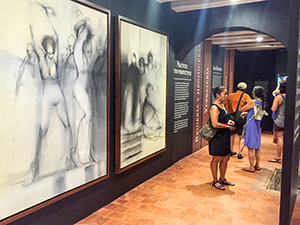 Don’t leave without going upstairs. The small exhibit of old religious artifacts on the second floor is only mildly interesting, but on the third floor there are small exhibits on the founding and history of Cartagena, as well as about the tribes that formerly lived in the region. Unfortunately, most of the descriptors are only in Spanish.

With the possible exception of the Naval Museum, which I avoided after learning it was more perfunctory than informative, Cartagena doesn’t have any large museums, but rather a few small and interesting ones. 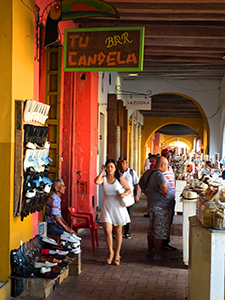 Many are also just the right size to escape the mid-day heat for an hour or so.

One is the Museo del Oro Zenú, a modest museum on Bolivar Park directly across from the Inquisition Museum. It has a beautiful collection of gold and pottery of the Zenú people, who inhabited the region before the Spanish conquest.

Another is the small Museum of Modern Art, which is more of a gallery than a museum. Although I’m not a lover of modern art, I found it contained some interesting works that were not just indecipherable blobs of paint on canvas. It’s just the right size to spend an enjoyable half-hour or so. 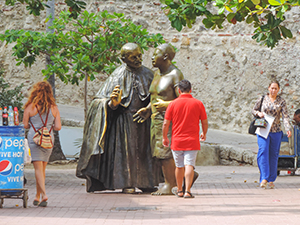 The museum is on the Plaza de San Pedro. The plaza is named for a monk who spent his life ministering to the enslaved brought from Africa. Near the church of St. Pedro of Cleaver, there’s a large statue of the saint and a slave. If you want to enter the austere church, you must buy the 11,000-peso admission for the adjacent convent, which is more interesting than the church. Enjoy a stroll about the convent’s small shaded garden.

Outside on the plaza, you can’t miss, and shouldn’t, the small, whimsical metal sculptures of Cartagenians going about their daily lives.

One day I took the Hop On – Hop Off tour bus out to the Castillo San Felipe de Barajas, a massive Spanish fort, the largest in the Americas. 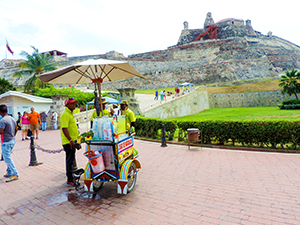 Although I was initially concerned about walking the roadway up to the top, I found it a rather easy walk.

It is an engineering marvel that took 120 years to complete. In fact, despite being attacked on numerous occasions, it is so large it was never conquered. A maze of tunnels beneath the fort, each six-feet tall and only a few feet wide, allowed personnel and supplies to be moved rapidly. Today they’re also a place to enjoy a refreshing respite.

Cartagena is both safe and relatively inexpensive. 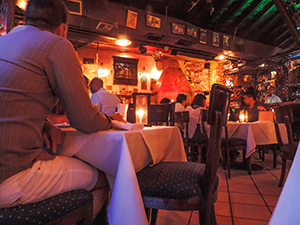 Colombian drug wars are now a thing of the past. But even during those turbulent times, Cartagena remained the safest place in the country, since criminal elements always considered it off limits. Despite walking all over the city day and night, I never once felt unsafe.

There are plenty of hotels with excellent service for all budgets, including many of the large chains.

Dining in Cartagena is a delight. An excellent dinner at one of the most popular restaurants in the city (including a bottle of good wine that was three times more costly than my entree), was $63 including gratuity. Lunch cost approximately $10 for a large salad with fresh shrimp and a bottle of local beer.

Transportation is also cheap. A taxi from the airport to the center of the old city is about $5. Aboard the red Hop On–Hop Off buses you’ll also get a good overview of the city for two days for about $16.