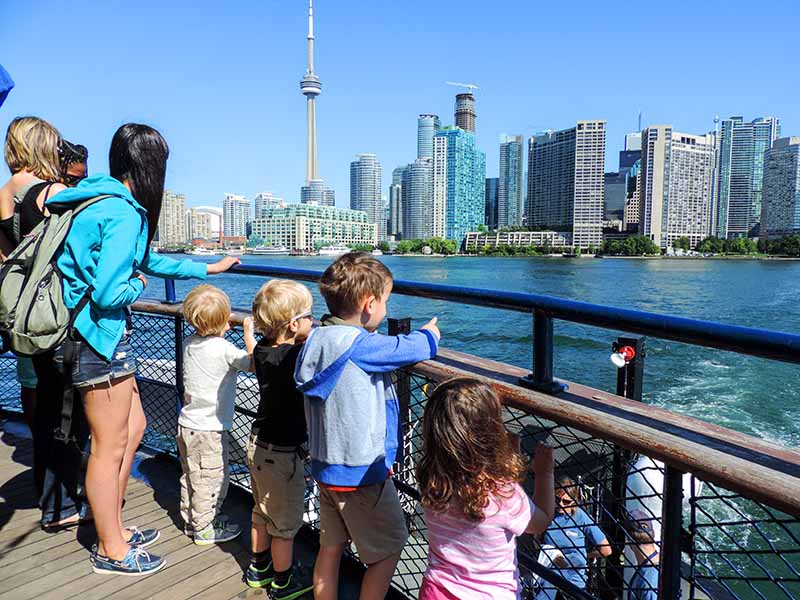 Leaving the city on the ferry to Toronto Islands

In fact, it’s one of my favorite cities. Not just in Canada, but in the world.

The reason isn’t only because it’s beautiful, has great restaurants and plenty to occupy you for a long weekend. You find that in many cities.

What differentiates Toronto is its “foreignness.”

Foreignness? You can certainly find a taste of it a lot closer to home.

After all, there are foreign-flavored places such as San Francisco’s Chinatown, New York’s Little Italy, and Miami’s Little Havana. They’re all old areas that originally were home to immigrants years ago. 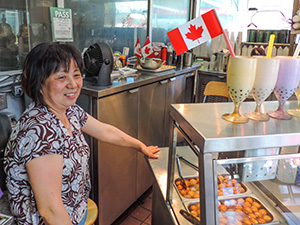 A restaurant in Toronto’s Chinatown

And there’s the rub.

Unlike U.S. cities, Toronto’s ethnic areas aren’t historical neighborhoods. More than half of the city’s present population was born outside Canada, and these areas are home to present-day immigrants.

They make Greater Toronto a microcosm of numerous foreign cultures. In fact, today more than 140 languages and dialects are spoken throughout the greater city area.

You find a multiplicity of cultures all over the city, evident in numerous ethnic restaurants, festivals, and markets. According to the United Nations, it is one of the most one of the most multicultural cities on earth. It’s also rated as one of the safest large metropolises in North America.

But there’s much more to the city than its foreignness. Toronto is also the third most significant English-speaking theater center in the world, after New York and London. It hosts a film festival that nears the prestige of Cannes and supports more than 50 dance companies. It’s also a center of the North American television and film industry.

It’s a city of excitement that, for the most part, works well. Former resident and Academy Award-winning actor Peter Ustinov once described it as “like New York, but governed by the Swiss.”

If your travel plans include Toronto, here are some must-sees to enhance your enjoyment of Ustinov’s wonderful city. 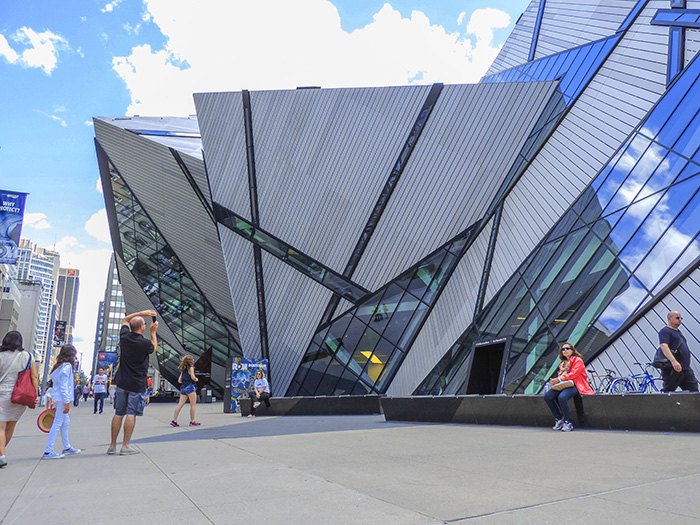 A Don’t-Miss in Toronto: the Royal Ontario Museum

The 100+-year old ROM, as it’s known to Torontonians, is a massive museum of world culture and natural history. Home to more than 6 million artifacts, it’s Canada’s largest museum and one of the largest in North America.

Favorite exhibits include the Dinosaur Gallery, Canada’s First People’s exhibit, rare Art Deco furniture and other pieces. Also, see the Arms and Armor exhibit and one of the best exhibitions of Greek sculpture in North America. Some of its pieces date to circa 325BC. 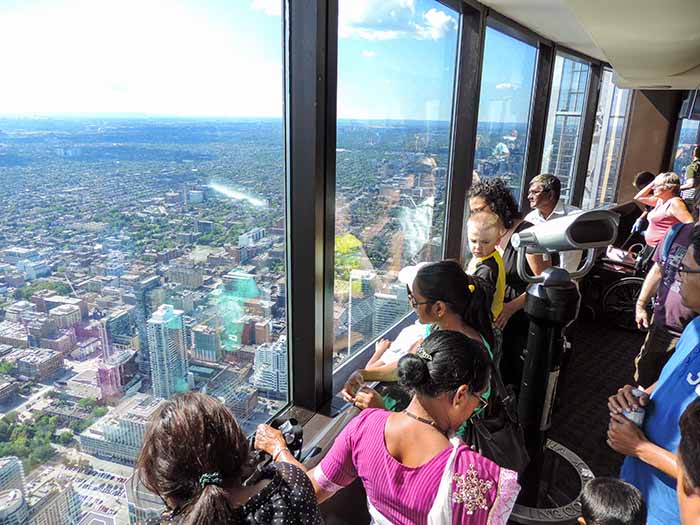 The view from the CN Tower

The 58-second elevator ride up this 1815+ feet-engineering marvel should certainly take your breath away. If it doesn’t, the view over the city and its islands at the top certainly will.

Built by Canadian National Railway, the CN Tower is the second-tallest freestanding structure in the world. On a clear day, you can see the U.S.-Canada border from its observation platform.

It’s one of those things you just have to do, despite the wait for the elevators being quite long at times. At the top, you can take a walk on the glass floor and look down almost 1/3 mile.

If you’re fearless, take a walk on EdgeWalk. It’s a hands-free walk on a five-foot-wide ledge that allows you to encircle the tower. You’re attached to an overhead safety rail by a harness 116 stories above the ground. It’s not for the faint-hearted. 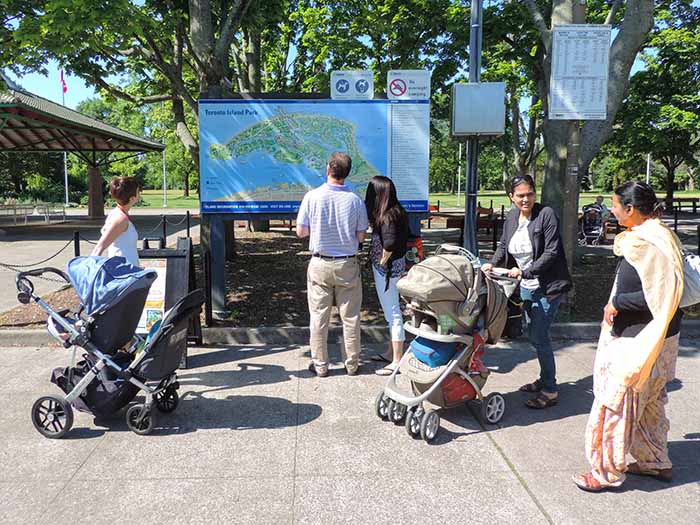 A sightseeing map on Toronto Islands

These wonderful car-free islands are easily accessible by ferry from downtown Toronto. A welcome respite on hot summer days, some of the islands are reachable by bridges, others only by boat.

On Centre Island, the popular main island, you’ll find Centreville, a small amusement park. Among its other rides is a late- 19th-century carousel. Many people just like to take the ferry over for a picnic or to stroll about for a few hours.

The Toronto Islands Ferry Terminal is at the foot of Bay St, off Queens Quay. 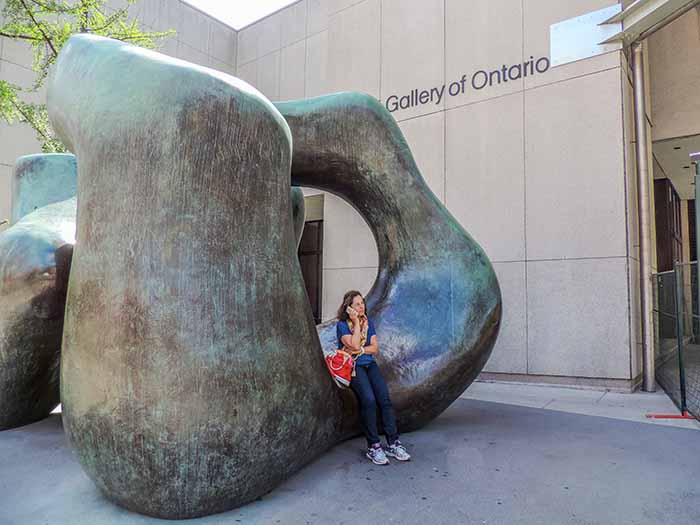 Entrance to the Art Gallery of Toronto

AGO charms from the exterior as well as the interior. Outside you’re greeted by a façade designed by native son Frank Gehry, and Henry Moore’s large Two Forms sculpture.

Inside you’ll discover significant works by some well-known Canadian artists as well as by such greats as Rembrandt, Renoir, de Kooning, Van Dyck, Picasso, Degas, Matisse, and numerous others. 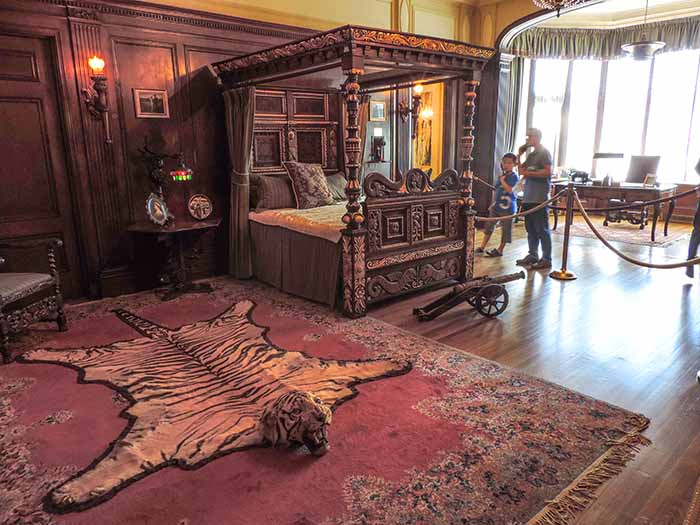 A bedroom in Casa Loma

Casa Loma, A Place to See in the City

Casa Loma, a European-style castle with castellations, turrets, chimneys, and balconies, is something you don’t expect to find in Toronto. Its spectacular 98 rooms are copies of those in English, Scottish, Spanish and Austrian castles.

It was completed in 1914 for Sir Henry Pellatt, a soldier, and financier who spent a fortune on its construction. Unfortunately, he lost the remainder of his fortune to the tax collector a decade later. See its giant pipe organ, majestic Great Hall, and beautiful bedrooms. There’s also a mahogany-and-marble stable reached by an underground passage and a five-acre garden. 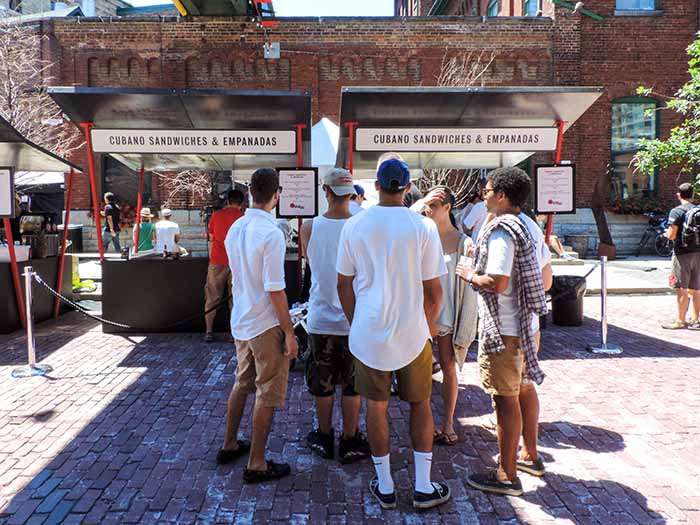 Sandwich shop in the Distillery District

A Great Place to See in the City: the Distillery District

Set in downtown Toronto, the 12+ -acre Distillery District was once the home of the Gooderham and Worts distillery. You might not know its name, but in the mid-19th century, it was the largest distillery in the British Empire.

Today the area’s Victorian industrial warehouses have been transformed into an area of boutiques, galleries, restaurants, artist’s studios and cafes. There’s even a quite good local performing theater.

Its old cobblestone lanes remain car-free link the 45 buildings in the area. In the warmer months, the district is the center for live music, exhibitions, and food events. 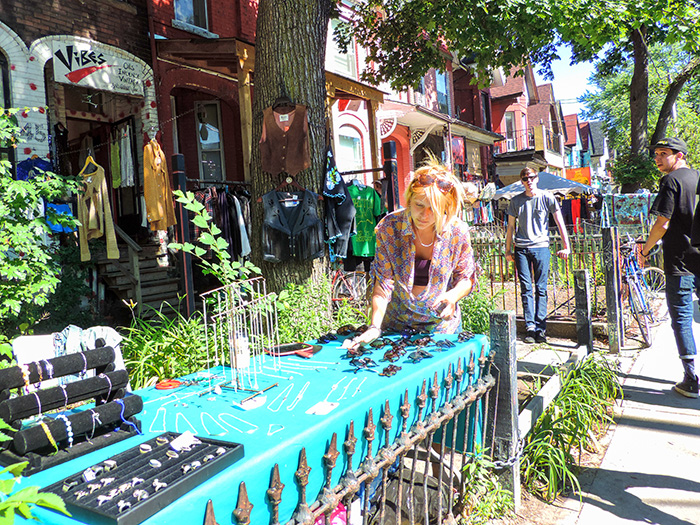 The market, which originated in the 1920s, is in the old Jewish neighborhood of Kensington. At that time families would set up stands in front of their houses to sell goods to their neighbors.

Today many of those houses remain, with some streets lined with shops and restaurants. It’s a somewhat artsy neighborhood with many vintage clothing shops as well as plenty of goods made in Asia.

Be aware that there is no formal outdoor market here; it is only named for the neighborhood. The last Sunday of the month, when it’s often most crowded, can be chaotic at times. 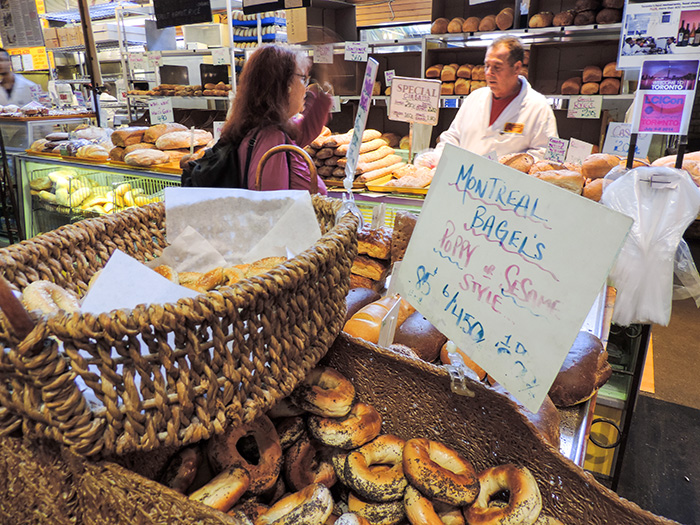 A bakery in St. Lawrence Market

Head to the St. Lawrence neighborhood in the city’s historic Old Town to visit St. Lawrence Market. Once the city’s City Hall, today it’s an incredible food market where you’ll find just about anything you want. That’s one of the reasons National Geographic once tagged it as the top market in the world.

This market is quite large, and an enjoyable place to walk about, looking at the energy and mix of nationalities. At Domenic’s Fish Market I watched a group of French Canadians having their just-purchased oysters shucked. They were obviously quite excited about what they’d be eating later.

Twenty feet away was Di Liso’s Fine Meats. Signs above it advertised Poultry Lane, BBQ Street, Pork Place, and Beef Boulevard. Like Domenic’s, it was doing a brisk business.

We visited the market with our friends Bill and Judith, and Judith urged us to try a peameal sandwich. Toronto’s signature dish and an acquired taste, a peameal is simply a Kaiser roll stuffed with Canadian back bacon. It’s quite popular, and thousands are served at St. Lawrence every Saturday. 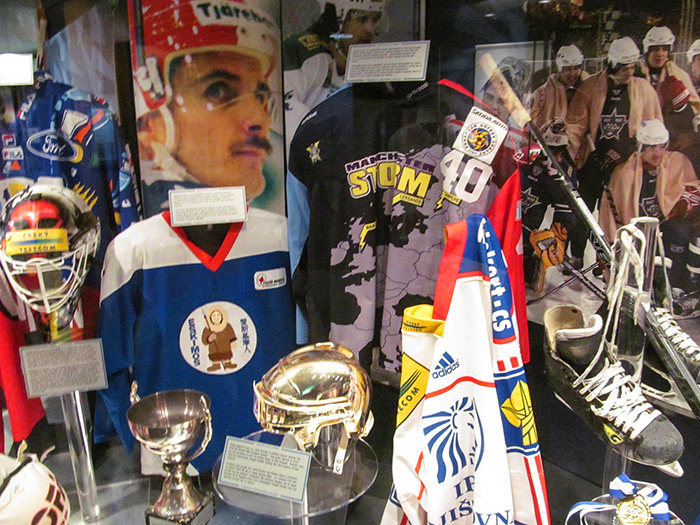 The Hockey Hall of Fame / photo: Doug Kerr via Flickr

You don’t need to be a hockey fan to enjoy a visit to the shrine of Canada’s favorite sport. The exhibit contains the largest collection of hockey memorabilia in the world including the original 1893 Stanley Cup.

You’ll also find displays of goalie masks, skate collections, players’ jerseys and a replica of the Montréal Canadiens’ locker room. There are also video games to test your skill against Wayne Gretzky and Mark Messier and other hockey greats. Also notable is the building itself, a former 1885 Bank of Montréal branch covered with decorative details. 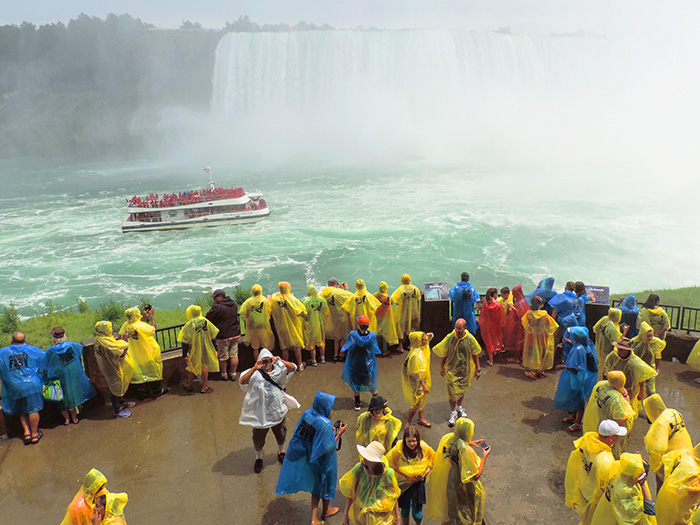 While not quite as close to downtown as other sites, Niagara Falls is a must-see when visiting Toronto. On the Canada-U.S. border, the world-famous falls are only a two-hour drive from the city.

There are several ways to see the falls from the Canadian side: above, behind and under the falls. If you have a few hours, it’s easy and well worth doing all three.

You reach the area behind the falls through underground tunnels. To go under the falls board one of the Hornblower Niagara Cruises, for a thrilling (and wet) experience. At nighttime the falls are beautifully lit with pink, blue and green lights.