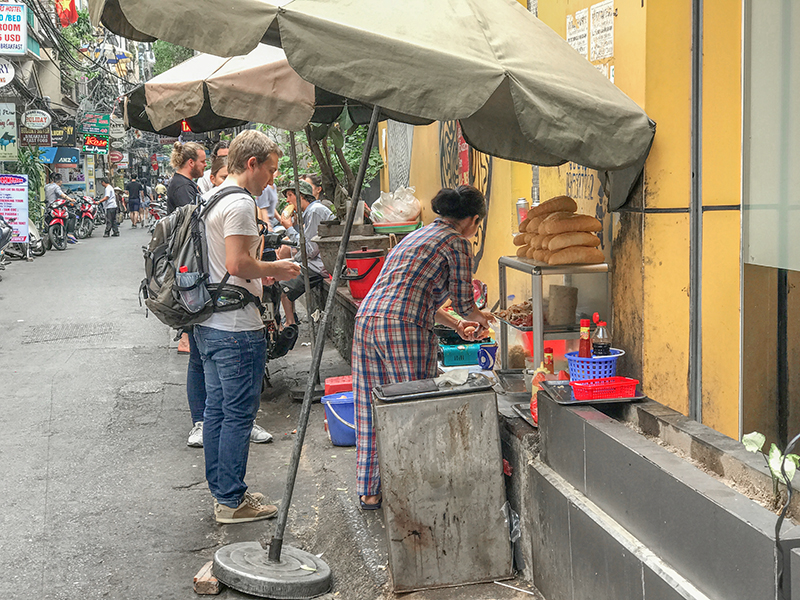 Street food in Hanoi, the best city in Vietnam

Vietnam is a long thin country that can be difficult to travel about, but it is still a fascinating place to visit.

Anchoring it at either end are two large cities, and the distance between them is considerable. In fact, Hanoi is nearly 1,000 miles further north than Ho Chi Minh City in the south. 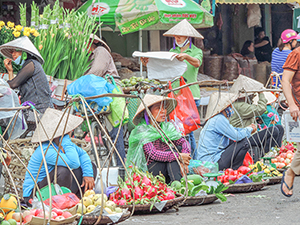 Considering the distance, many travelers planning a trip to Vietnam often wonder which is the best to visit. If you’re making a choice, be aware there are many similarities between the cities, as well as many differences.

First of all, Ho Chi Minh City, known as Saigon during the Vietnam War, is the more modern of the two. But, on the other hand, many travelers enjoy the more charming, ancient layout and ways of Hanoi.

That “ancientness” also means Hanoi is a bit more ”formal,” sometimes even standoffish, since it clings to traditional Vietnamese customs. Due to interaction with the French (during its occupation) and Americans (during the war) people in Ho Chi Minh City aren’t as formal.

Both cities have populations of about 8 million, but since it’s more spread out, there’s less congestion in Hanoi. Each town also has uncountable shops and incredible street food everywhere you turn…as well as a sea of motorbikes that come at you from every direction. 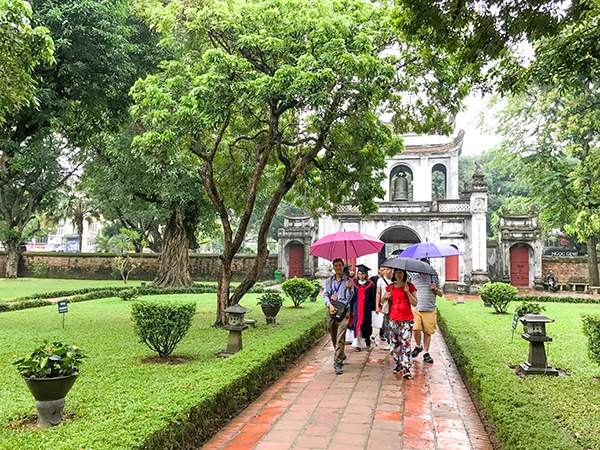 The Temple of Literature in Hanoi

Hanoi is much more atmospheric then Ho Chi Minh City, one of the reasons it’s the cultural capital of Vietnam. Nevertheless, both cities have lots of museums, temples and colonial architecture, the latter a reminder of the French Colonial era. 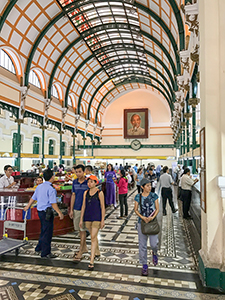 In Ho Chi Minh City seek out the impressive French colonial architecture in the Dong Khoi area. Notre Dame Cathedral, covered in tiles imported from France, anchors one end of Dong Khoi street. Adjacent to it is the General Post Office, one of the most beautiful French-Colonial buildings in the city. On one of Ho Chi Minh City’s torrid days, its tall ceilings help provide a refreshing respite from the sweltering city.

A few blocks away the beautiful Hôtel de Ville is now occupied by the People’s Committee of Ho Chi Minh City.

Not to be outdone, in Hanoi you’ll find the beautiful Hanoi Opera House, modeled on the Paris Opera. During the early 20th century it was the centerpiece of French-Colonial architecture throughout Indochina.

Nearby is the Sofitel Legend Metropole Hotel, the most prestigious and oldest in the city. It was once the most renowned hotel in all of French Indochina. If for nothing else, stop by for a drink.

And while you’re in Hanoi “don’t-miss” the Temple of Literature, Vietnam’s first National University. Established in 1070 in honor of Confucius, it’s a calm and serene escape from the hectic and noisy city center. I was lucky enough to be visiting one day when graduating students came to honor Confucius.

Get Your Guide is a great company that offers popular tours and discounts worldwide. Here are recommended tours for travelers in Hanoi: 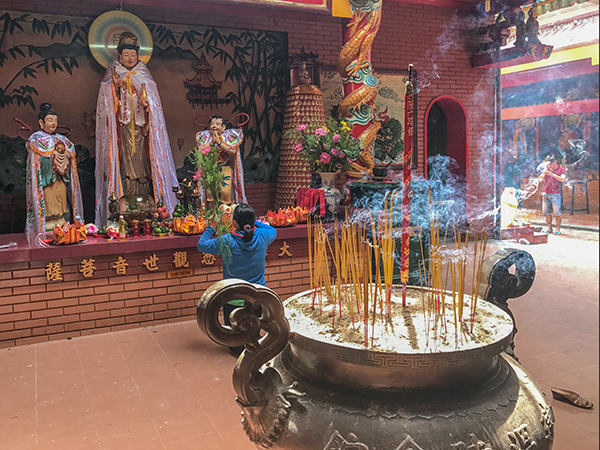 Other Sites and Day Trips

In Hanoi, you’ll find many pagodas and temples and the austere Ho Chi Minh Mausoleum. There are also museums celebrating the fine arts as well as national and military history. Another is the Hoa Lo Prison Museum, aka “The Hanoi Hilton” during the Vietnam War.

You’ll find fewer museums in Ho Chi Minh City although the War Remnants Museum is eye-opening and impactful. There are Water Puppet Theaters – water puppetry dates back almost 1,000 years in Vietnamese culture – in both cities.

There are also popular day trips from each city. Most popular from Hanoi is the seascape of Ha Long Bay, the top tourist attraction in Vietnam. It’s a long, four-hour drive from Hanoi, however, so you may find a multi-day trip more enjoyable. Outside Ho Chi Minh City are the popular Cu Chi Tunnels, used by the Viet Cong during the Vietnam War. They are approximately a two-hour drive from the city. 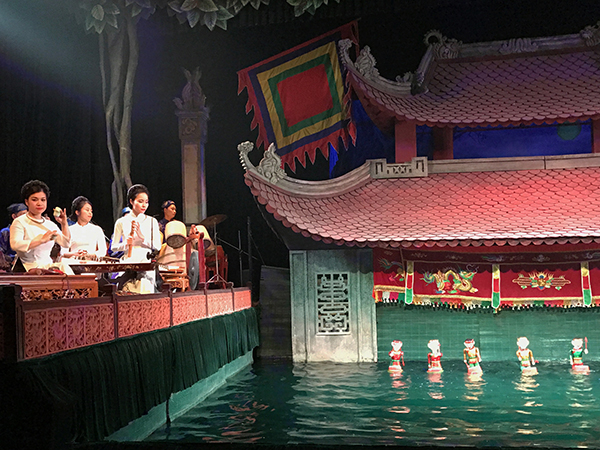 A water puppet show in Hanoi

Best City in Vietnam for Atmosphere and Shopping

Due to it being the commercial center of the country, Ho Chi Minh City is much more modern than Hanoi. If you’re looking for atmosphere, however, you’ll find the authentic old neighborhoods of Hanoi give it a village feeling. 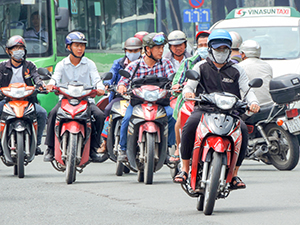 The Old Quarter is a charming place with wonderful winding streets. Here you’ll find many streets named for the items once sold there such as shoes, silk, silver, etc. One that remains true to its name, however, is Hang Ma – “Paper Street.” Visit it, and you’ll discover a cascade of colorful shops selling nothing but paper items. It’s charming and colorful.

Just a block away there’s a typical South Asian food market selling everything imaginable. Jump into the throng and walk all about – just watch out for the occasional motorbike snaking through the crowd.

If you’re shopping, you’ll find a better choice of silk, crafts, embroidery, lacquer ware and other handmade goods in Hanoi. Ho Chi Minh City, on the other hand, is awash in a sea of cheap souvenirs. You’ll find much of this in the Ben Thank and Dong Khoi markets. What you’ll also see in Ho Chi Minh City are modern air-conditioned malls with the ubiquitous brand and designer shops. 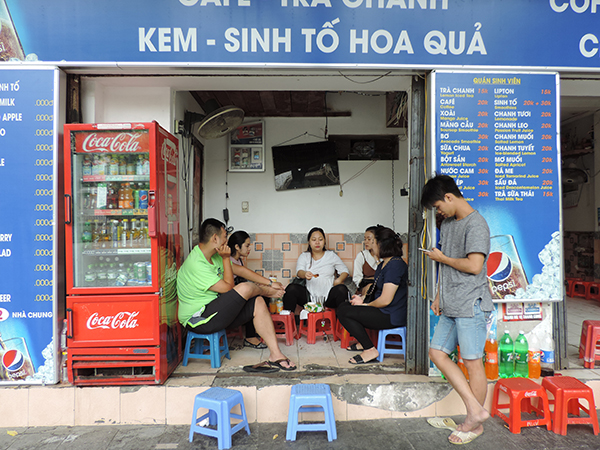 A coffee house in Hanoi

Hangovers from the French occupation include not only beautiful architecture but also a vibrant café culture. You’ll find that coffee in Hanoi is a bit stronger and less sweet than brew in Ho Chi Minh City. 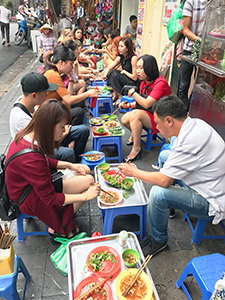 As in most countries of the world, there’s the usual argument as to which city has the better cuisine. Basically, in Hanoi you’ll mostly find traditional Vietnamese cuisine although there are exceptions, especially in the large hotels. Ho Chi Minh City, on the other hand, is more varied since it is a commercial center. There you’ll find both traditional and European/American concepts.

In both cities, you’ll discover that Vietnam is heaven for foodies, especially when it comes to cheap street food. All day long and into the night you’ll see people sitting on little plastic stools having a street meal.

King of the street food is “pho,” a noodle soup infused with meat and fresh greens. The national dish, you can buy it on the street or in restaurants for less than a dollar.

Although you’ll eat well in both cities, Ho Chi Minh City wins hands down because of the breath of its choices. It also has a more vibrant nightlife scene, since traditional Hanoi has a strict curfew in its old quarter. 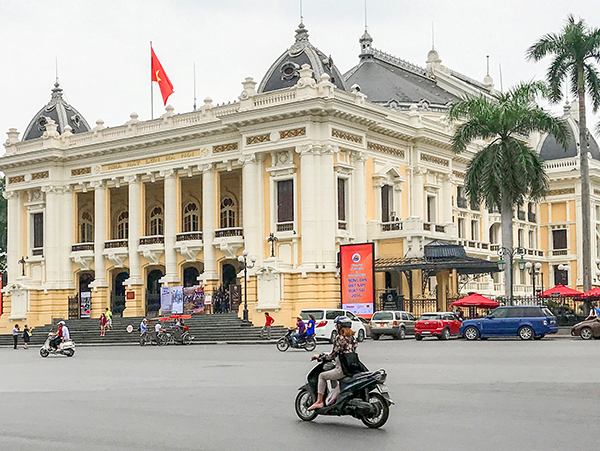 To sum it up, Hanoi provides a more historical and cultural experience in Vietnam. It’s also much less glitzy than Ho Chi Minh City. It’s a better place to absorb traditional Vietnamese culture and see the more artistic and creative side of the country. Both cities offer travelers great opportunities to taste regional cuisine and street food. But as the commercial center of Vietnam with fancier hotels and restaurants, Ho Chi Minh City provides more beyond traditional Vietnamese dining.

Both cities offer good museums and other cultural sites, but I found Hanoi to be a much more interesting city. If you’re in Vietnam for just a few days and must choose only one city, I’d select Hanoi. It has enough cultural sites, architecture, shopping, markets, etc. to keep you busy for several days.

On the other hand, if you have the time, I would visit both Hanoi and Ho Chi Minh City. Each provides a unique experience, and the sum of the two is quite rewarding.