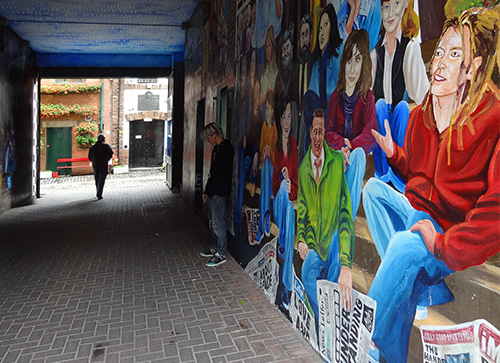 Alleyway near the Dark Horse and Duke of York

Several months ago I went to Belfast to see the much-heralded Titanic Belfast Museum, which I found to be one of the most engaging museums I’ve visited anywhere in the world.

What I discovered also was that Belfast fascinated me as a city with charm and beauty, vitality and spirit, all infused with more than just a wee bit of Irish charm. 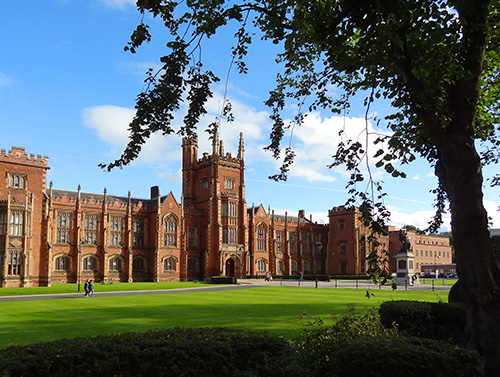 I had been driving for more than a week, and on Wednesday morning, the day after my arrival decided to take a break with a short morning walk. I wanted to see St. George’s Market, the city’s historic food market and, after being disappointed by finding it was open only on Fridays, decided to head off to the Titanic Museum.

Along the way I passed Victoria Square, a shopping mall flush with American and European brand names, and couldn’t help admire how well all its soaring glass and steel melded so wonderfully with the old neighborhood into which it had been slipped. I took a quick peak inside but kept on the move, heading for the Titanic. 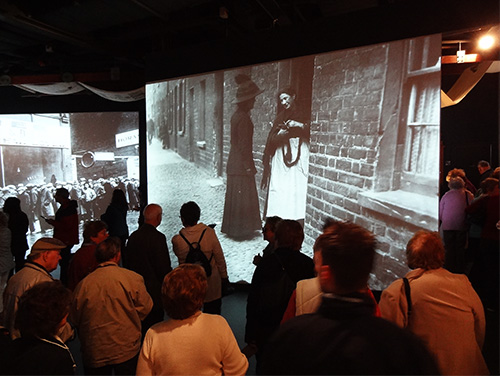 The Titanic Belfast also turned out to be all soaring steel and glass, but instead of melding with the neighborhood stood out like a massive monument. Everything about the building had a nautical theme, from the quartet of ship bows on the exterior, down to the anchor chains that line the entrance way and guide you into the lobby. Even there the ticket windows looked like large portholes set in rough-sawn pier planking.

The museum itself was mesmerizing, unlike any other non-art museum I’ve been in. There’s an introductory section discussing Belfast at the time the ill-fated liner was built, which is a great historic and cultural overview of the city and people. You can read more about my experience in the Titanic Museum, plus see a short video of the ship’s launch, at The Titanic: Belfast’s World-class Museum. 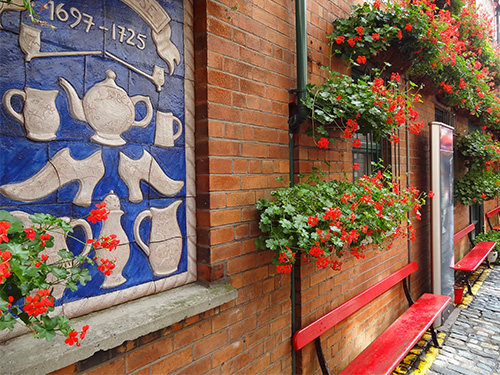 After leaving the museum I found that I was a bit lost and overwhelmed by the city since I knew nothing of it. I had a contact at the Northern Ireland Tourist Board and emailed her asking for suggestions and she arranged for me to later meet with a local cab driver, Ken, who would give me a three-hour tour of the city. It was the best thing I could have done and I should have thought of it myself. Taxi tours are a great way to get an insider’s look at Belfast.

Ken collected me at my hotel, the somewhat funky Malmaison, and since I enjoy minutia he quickly caught my attention when he told me that the building was originally a seed warehouse. It dated to 1867, he noted, and the five heads on the façade represented the five continents of the world. 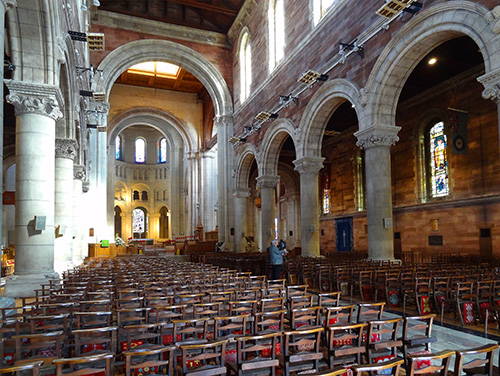 We set off up Victoria Street in his taxi, past the landmark Albert Memorial Clock (“built in 1869, Jim, in memory of Albert, Queen Victoria’s husband, who died of typhoid fever”), which I learned was slowly sinking into the ground. Somehow it didn’t surprise me since I soon learned that it was built adjacent to an area actually built above a river.

After a short drive we made a stop at Belfast Cathedral, a beautiful church that has a 130-foot stainless steel spire protruding through a glass platform above the altar. Incongruous as it may seem, it was an amazing sight inside a beautiful church. Across the street Ken then showed me Writer’s Square, where inscribed in stone at various points were quotations from 27 deceased Northern Ireland authors, a poignant and perfect way to pay tribute to Belfast’s literary past. 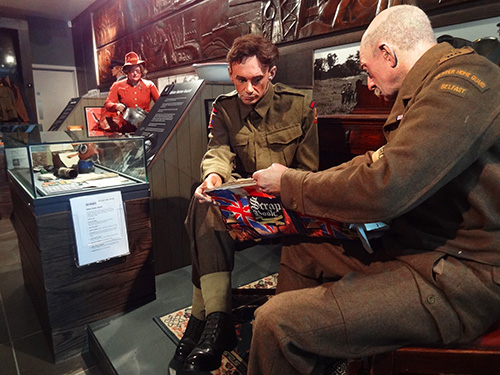 Since Ken found a place to park his taxi we continued on foot back across to Talbot Street. He had two special places to show me and on the way, just a minute up the street, we passed the Northern Ireland War Memorial, actually a little storefront museum dedicated to the home-front exhibition during World War II. A good part of it was dedicated to Americans who served in Belfast during the war and although rather basic, its little display was still interesting.

We continued on and turned onto Hill Street where Ken took me the Dark Horse, a sandwich and coffee house that appeared unassuming from the outside but inside was like no other. Just about everything in it was an antique, the tables, the decorations, the bar, even the loo (although the plumbing was modern) … almost like a living antique shop. Once outside again, he brought me into the alleyway next door that had murals on the walls pertaining to present-day life in the city. You see many such murals as you move about Belfast. 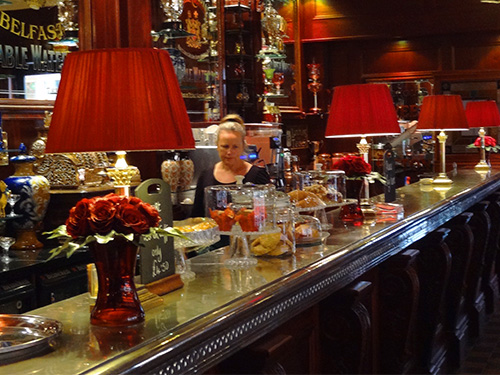 Ken also wanted to show me the Duke of York Tavern around the corner, the sister establishment of the Dark Horse, which was destroyed in the early 1970s when the IRA planted a car bomb outside it. It was rebuilt (a marvelous job) and today it’s once again a popular pub filled with over 100 varieties of different whiskeys as well as plenty of wine and beer. It’s worth a visit just to see the inside.

He had taken me to the Duke of York since I had told him that I was interested in seeing and learning more about the period of “the troubles” in Northern Ireland from 1969 to 1994 when about 15,500 bombs were set off by the IRA. Ken told me that as the capital Belfast got its fair share and “it was the luck of the draw who lived and who died since the bombs were placed indiscriminately.” 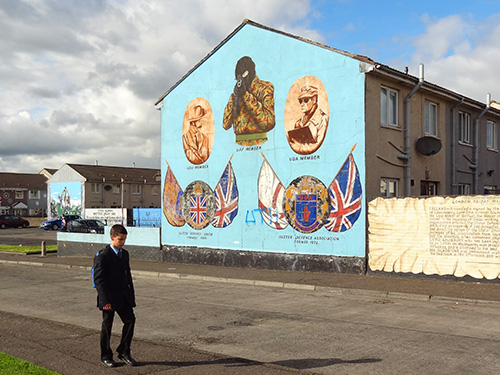 Wall murals from the time of “the troubles”

We went back to his taxi and continued on to the old Catholic and Protestant neighborhoods where political murals still cover many walls. We stopped along the wall that was built by British soldiers to separate the Irish and the British factions, with Union Jacks and Irish flags still flying at opposite ends of the street. Murals can be found in different areas about the city and several tour companies, as well as just about any cab driver, can give you a tour of them.

We headed off to the Queen’s Quarter of the city to see stately Queen’s University, the Botanical Gardens and the Ulster Museum, all located right next to one another on University and Stranmills Roads. All along the way were plenty of little restaurants and coffeehouses, and in the midst of it all was Friars Bush Graveyard, a burial ground possibly dating back to pre-Christian times, a beautiful place to take a walk although it’s only open by appointment and for scheduled tours. 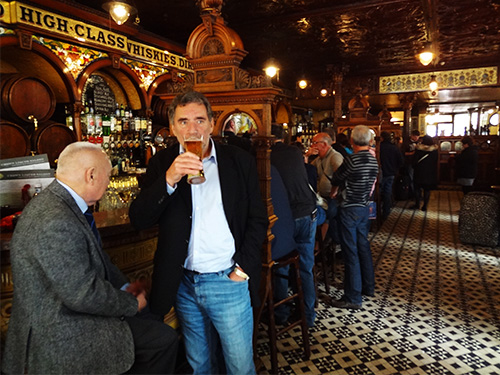 Heading back down to Great Victoria Street, at the corner of Amelia Street, I asked Ken to stop since I wanted to see the renowned Crown Liquor Saloon. Inside I found one of the more ornate pubs in Belfast with a centuries-old interior an a good afternoon crowd. According to Ken, the wife of the owner chose the name but her husband, not enthralled with British royalty, had the crown embedded in the tile at the doorway so people would scuff their feet on it when they entered.

The whole area about the Saloon is quite alive and filled with both Belfastians as well as tourists. There are plenty of restaurants in the area and live Irish music at some of pubs here in the evenings. Robinson’s Bar, right next to the Crown Liquor Saloon, offers live music every night of the week. 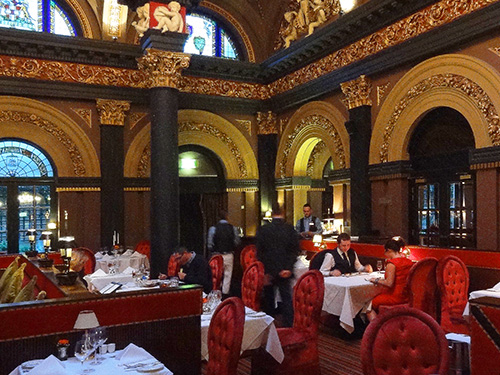 The Great Room Restaurant at the Merchant Hotel

Further along Victoria we passed the Europa Hotel, “the most bombed hotel in all of Europe,” according to Ken. It was bombed 33 times during “the troubles,” he said, with probably 1,000 other incidents and hoaxes, although both Bill Clinton and George Mitchell stayed there on the various times they visited.

About five minutes further we stopped at the luxury Merchant Hotel since Ken wanted to show me the hotel’s Great Room Restaurant. The hotel was the former headquarters of Ulster Bank and the restaurant was located in the main banking hall of the building. A blend of Victorian and Art Deco, the room was spectacular.

When we returned to the Malmaison Ken had me look down Victoria Street towards the mountains in the distance. I didn’t see it right away but when he mentioned Jonathan Swift’s Gulliver’s Travels I immediately saw the mountainous shape of the sleeping Gulliver lying down with his face looking up towards sky. 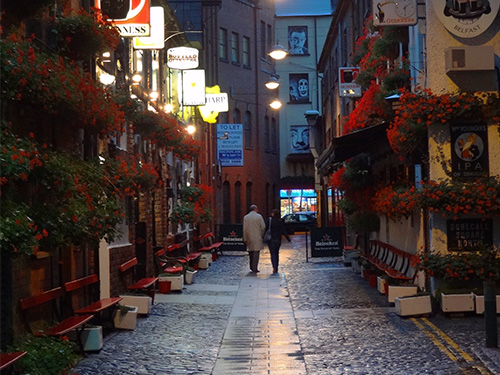 Evening on a Belfast street

Although a Dubliner, Ken told me, Swift was a Church of Ireland minister and his church was on the other side of that mountain. According to local legend Swift had been visiting in Belfast when he looked up to the rock formation – locally called Napoleon’s nose since it looks like a silhouette of the French emperor – and got the inspiration for his novel.

When I returned home I researched the legend and found the place Swift is said to have been standing at the time of his inspiration. It was Lilliput Street in Belfast.

My visit to Belfast was partially sponsored by the Northern Ireland Tourist Board. As always, however, all of the views and opinions expressed are strictly my own – J.F.