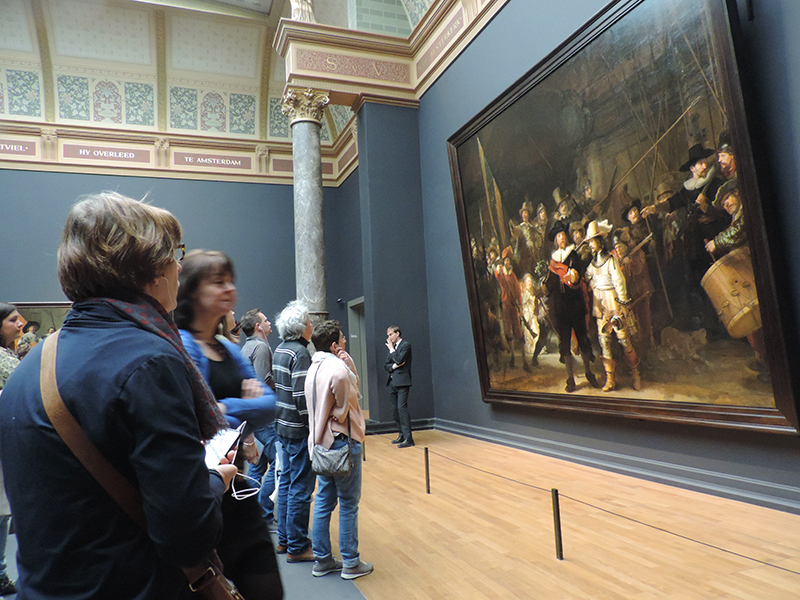 Rembrandt’s “The Night Watch” at the Rijksmuseum, something to see during 48 hours in Amsterdam 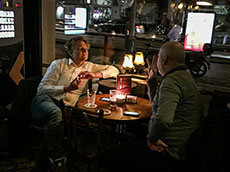 Relaxing in a pub on Bilderdijkstraat

This means I’ve often seen it mostly in dribs and drabs, always in a rush, passing through on my way to somewhere else, never having time to give anything more than a cursory glance.

But this time I wanted to see it in a more relaxed way, and have time to peel back a bit of the veneer of the city. I surely would revisit several of the old places I liked, maybe viewing them from a new perspective, but I also planned to unearth some new ones without the gun of time pointed at my head.

It turned out to be a wonderful two days in Amsterdam, done relatively inexpensively, and just at the right pace to reinvigorate my love of all things Dutch.

I booked myself a room at the three-star Alexander Hotel, chosen since it is located in a nice upscale area near the Museumplein, where much of the world’s great art is gathered in a group of wonderful museums. 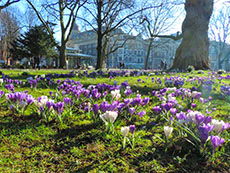 My room was quite small, just six-feet wide and a third-of-a-bowling alley in length, but it was clean and quite suitable as my base of operations.

The price was also reasonable for the area, just a bit over $100 per night, and included a large Dutch Continental breakfast.

I soon was in touch with my Dutch friend Bas, who I had met the previous year in South Dakota where we both were photographing and writing about the state’s annual buffalo roundup. Bas bicycled over that evening, and he took me to a nice local pub and restaurant with not another tourist in sight. 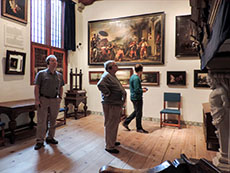 The next morning I was off to Rembrandt’s House and the Portuguese Synagogue, two places I had missed over the years. Luckily, they turned out to be quite close to one another, not far from Central Station and the local tourist office (VVV) – only two stops away on the underground adjacent to the VVV. They were easy two reach and seeing them together save a lot of time for my 48 hours in the city.

When you exit the station, walk north a block and turn into Waterlooplein Market, a little secondhand street market more striking for the local color it provides the neighborhood than for anything on its tables. Walk through it and at the end turn right; on the next corner you’ll find the Rembrandt House Museum where the artist painted many of his greatest works. It’s a fascinating little place where Rembrandt lived for years before losing the house in bankruptcy. 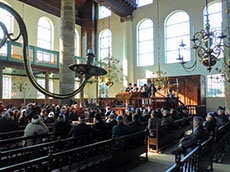 A service at the Portuguese Synagogue

When you come out of the museum turn right and walk down two blocks, then cross the square. The dark building you’ll see on your right is the old Portuguese Synagogue, built in 1675 and inspired by the Temple of Solomon in Jerusalem.

Next to the synagogue stands the bronze statue “De Dokwerker,” a tribute to the Dutch dockworker’s who striked in 1941 following the arrest of 450 Jews for the killing of a Nazi sympathizer. I found it poignant and moving.

Across the street in the heart of the Jewish Quarter is the Jewish Historical Museum. Non-Jews should be aware that the synagogue and museum, and just about everything in the neighborhood, close on Saturday, the Sabbath.

See The Anne Frank House, During Your  2 Days in Amsterdam

I headed back to Central Station and boarded a tram for the Anne Frank House (take either the #13 or 17 to the Westerkerk stop). According to the VVV about a million people visit the museum each year and when I arrived, I saw that a good number of them must have decided to visit the museum that day. 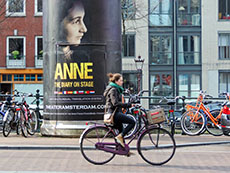 A bicyclists near the Anne Frank House

I decided to forego the Frank House and continue on – a bit of a let-down but I had seen it years earlier so I wasn’t totally dismayed – and backtracked to the Amsterdam Museum. To make the most of your two days in Amsterdam, reserve your tickets in advance.

The museum was originally a convent and later an orphanage, the conversion taking place in 1580, which gives you an idea of the age of the place. Its age is fitting though, since the halls of the building are filled with paintings, maps, jewelry, archaeological finds and artifacts, all providing a stunning glimpse into the history of the city and its people.

There’s enough in the Amsterdam Museum to occupy one for hours, but I made a break and walked back towards Central Station to embark on that most touristy of Amsterdam’s activities: a canal boat tour.

During Your 48 Hours in Amsterdam, see the City From the Waterline

Despite my many visits to the city, I had never taken a canal cruise. “It’s time,” I thought as I wound my way to one of the waiting boats near the station. 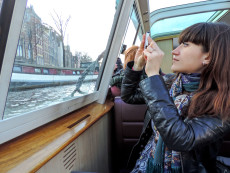 A cruise on a canal boat

It turned out to be a lot better than I thought it would be, mostly for the waterline perspective it provided of the facades of the city’s famous gabled houses. What was even better, however, is that it let me view an authentic slice of late afternoon life in Amsterdam…people picnicking along the sides of the canal, lovers cozying above us as we slipped beneath a bridge, young and old on bicycles flying along the cobbled streets, people sitting in open windows watching life go by. It was a perspective of the city everyone should see at least once.

Although you find clusters of museums in other great world cities – London’s popular clutch of museums in South Kensington and New York’s wonderful Museum Mile on Fifth Avenue, for example – nothing comes close to Amsterdam’s marvelous Museumplein. Even if you only have 48 hours in Amsterdam, you should see at least one museum on the Museumplein. I suggest the Rijksmuseum. 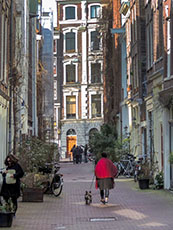 An alley off Kloveniersburgwal Canal

Tucked away in the center of the city, on a huge lawn rife with picnickers, joggers, children at play, lovers, you name it, is a triumvirate of world-renown art museums and a grand concert hall, all within a few minutes walk of one another.

Together the three museums – the Rijksmuseum, with the world’s greatest collection of 17th-century Dutch art; the Van Gogh, home to hundreds of the artist’s works; and the Stedelijk, filled with modern and contemporary art and design – ensure that there’s something here for everyone.

The first thing in the morning I headed for the Van Gogh since I had a glimpse of its long lines the day before and I didn’t want to eat up part of my 48 hours in Amsterdam standing on line.

It’s a treasure trove of the artist’s works, more than 200 of his paintings including the renowned “Sunflowers,” “Self-Portrait as a Painter,” and “Wheatfield with Crows.” 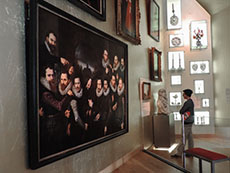 In it you’ll see a great selection of Van Gogh’s works and learn much about the tortured life of the artist, as well as see works by his contemporaries. His brother Theo, an art dealer, brought the entire collection together.

I just wish I had more time to spend with Van Gogh (if you visit on a weekend go early to avoid the crowd) but after only an hour or so I walked over to the Stedelijk. I didn’t spend much time there either, something that suggests my lack of interest in modern and contemporary art, although I did find a few of the exhibits of interest.

To be truthful, I had given both museums short shrift because my real interest stood at the other end of the plein: the treasure trove in the Rijksmuseum.

I’ve always loved the Rijksmuseum not just for the art but also for the architecture. It’s a beautiful building, spacious and regal, with plenty of room to walk around without being too hemmed in by the crowds. It’s the perfect place to spend a few of those 48 hours in Amsterdam. 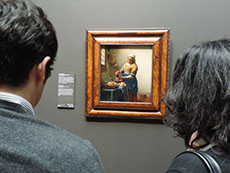 As you walk about you can’t help feeling awed by the masterpieces that surround you. Thankfully, in the more popular galleries that hold such treasures as Rembrandt’s Nightwatch, placemat-size guides explaining the painting and its nuances are provided to visitors.

Nightwatch, along with other masterpieces, are on the second floor (the American third floor), the most popular section of the museum. The first floor, on the other hand, has few visitors, and you can walk through galleries that are completely empty, leaving you alone to admire the paintings, antique furniture and pieces of art. 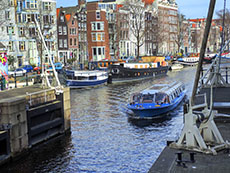 One other thing I’ve always loved about the Rijksmuseum is that unlike the Van Gogh (that prohibits photography), you are allowed to take photos of all its exhibits. Walk of up to your favorite Rembrandt, Vermeer or Hals and snap that photo to use as a screensaver on your computer back home.

If you’re not worn out after leaving the Museumplein, walk over two blocks to Pieter Cornelisz Hooftstraat – where you’ll find many of the treasures of the fashion world in a multitude of boutiques…Jimmy Choo, Canali, Gucci, Chanel, Corneliani, Vuitton…the masters a fashion just five minutes from the masters of art.

For some travelers, it’s the best of both worlds.

Netherlands Board of Tourism
http://www.holland.com