I was walking along Norzagaray Street in Old San Juan, admiring beautiful views of the Caribbean, when I heard it.

It was a Latin rhythm, a near- perfect score to accompany the cinematic view of the picturesque coast below.

Minutes later I stumbled upon a crowd around a small band outside a bar on a little side street. Young and old were singing and dancing as the beer flowed copiously from local bars. It was pure San Juan, and I was quickly drawn in by the color and the rhythm.

Color and the rhythm are found all over Puerto Rico, especially in its capital, San Juan. Too often, though, the city is thought of as only a port for Caribbean cruises. It is, however, a great destination in itself – and an affordable one.

Since Puerto Rico is a U.S. territory, passports aren’t required for U.S. citizens. Moreover, San Juan is only 2 ½ hours from Miami and enjoys good air connections from most large East Coast cities.

Best of all, though, Puerto Rico is a bargain compared to the rest of the Caribbean. That’s the result of an economic malaise brought about last year by reports of the mosquito-borne Zika virus.

The Puerto Ricans I met, most angry at the loss of tourists, said it was all overblown or never existed. And during my days in San Juan, I didn’t see a single mosquito.

Today there are several luxury hotels in San Juan, most along the beachfront. But with only 48 hours to explore, I chose the Old San Juan Sheraton at the entrance to the old city. It’s well located, right across from the piers, also making it a favorite for many cruisers. 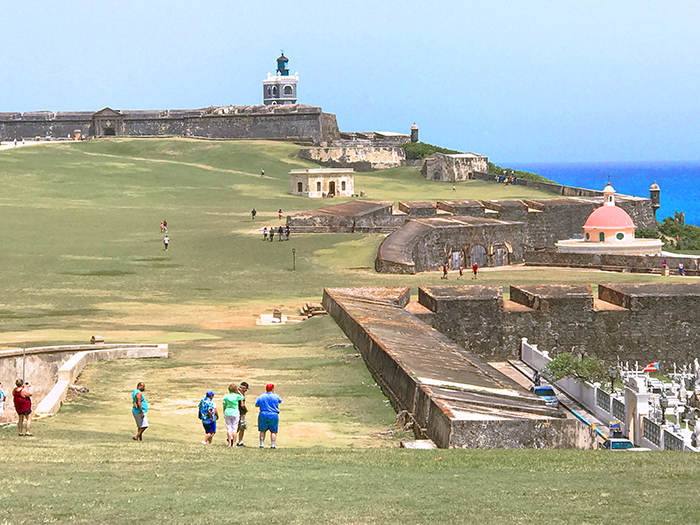 With only two days in the city, I found plenty to do. My first day I took the tourist trolley from near the pier to El Moro Fort, one of the city’s famed fortresses. More of an old bus than a trolley, it’s a good way to avoid the uphill walk to the fort. Trolley or taxi there, I thought, and walk back downhill.

The crowded trolley left me off on the vast plain in front of Castillo San Felipe del Moro, the proper name of El Moro, where hundreds of people were lolling about on the sunny morning, many flying kites.

The Fort, a National Historic Site, took more than 200 years to build and is fascinating to explore. Be sure to view the cannons on its ramparts.

When you exit and walk back across the plain, you’ll see Santa María Magdalena de Pazzis Cemetery on the left. Below the plain near the ocean, it’s a beautiful cemetery and the final resting place of many San Juan notables.

From here follow Norzagaray Street, where I found my neighborhood party, to Castillo de San Cristóbal. It’s Old San Juan’s other famous Fort – also a National Historic Site – and is quite fascinating.

San Cristóbal took 150+ years to construct and is a massive fort with seven defense lines connected by tunnels and moats. It’s a UNESCO World Heritage Site, and U.S. National Park Rangers provide free tours. With an interesting small museum, I found this castle-fort more beautiful and interesting than El Moro. From it, you can often see cruise ships in port across the sea of mauve-, pink-, and apricot-colored rooftops.

Walking around old San Juan is very interesting. The buildings are a sea of pastels, many with bougainvillea-draped balconies. There are also tree-shaded plazas throughout the Old City, some with little kiosks scattered about them.

One local favorite is the Plaza de Armas, the original main square for the city.

It’s notable for its fountain with four 100+ year-old-marble statues representing “The Four Seasons.” Nearby are a bronze bench and seated figure dedicated to a local composer.

A block away is the Neo-Classical Cathedral of San Juan, with the tomb of Ponce de Leon. De León founded San Juan in the 16th century and from here set out to find the “fountain of youth.”

The Cathedral is on Calle del Cristo, one of the most comfortable and colorful streets in the city. It runs from the Cathedral all the way down to the harbor and is filled with upscale boutiques and shops, and peppered with plenty of art galleries.

Blue cobblestones, originally brought to the island as ballast in Spanish galleons, cover Calle del Cristo and other streets. (They were originally cast from furnace slag, hence the blue color.) Many of the streets have been paved over but are now being restored to show their original cobblestones.

Even though time limited my visit, I found the quite interesting. Museo de Las Americas focuses on Latin American art and is set in the old Spanish Army barracks.

Since I was short on time, however, I only visited the exhibit on the natives of the American continents. I was fascinated by a fist-sized shrunken head, which the docent explained how the Indians shrunk it.

Nearby the museum is Casa Blanca, the oldest continually occupied building in the Americas. It’s not a popular tourist site, and there’s not a lot to see, but it is historic and quite atmospheric. Although built for Ponce de Leon, he never lived in it; it was his ancestors who made their home there.

When exiting Casa Blanca, you can turn left towards El Moro, or continue straight ahead down Calle de San Sebastian. The main street in the area, it’s also one of the prettiest. And it’s an easy walk since everything tumbles downhill to the harbor.

Go down and walk along the old city walls to San Juan Gate, the gate through which dignitaries entered the city. After entering, they walked up Calle del Cristo to the Cathedral to thank God for a safe voyage.

From here you can walk back to the harbor along pretty Paseo de la Princesa. It’s a lovely little thoroughfare with a park on one side and a parking lot on the other. Even on a hot day, it’s an enjoyable walk, since large trees shade the pavement.