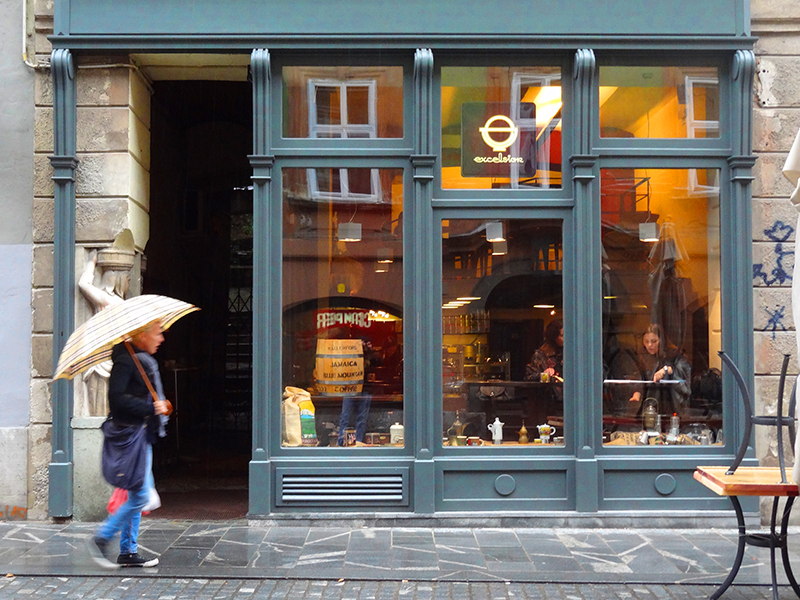 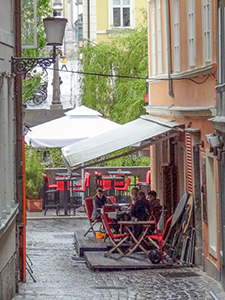 An alleyway leading to the river

Perhaps it’s Ljubljana’s size, or lack of it, that causes so many travelers to ignore it. That’s a mistake because it’s not only a beautiful city, there are also many things to do in Ljubljana.

The capital of Slovenia, a country wedged between Northern Italy and Croatia and not even half the size of Switzerland, is easily missed by those in their rush to the beaches of Croatia and Greece.

Unfortunately, these travelers never realize they’ve missed one of the most beautiful and charismatic cities in southeastern Europe.

Ljubljana was born centuries ago as a Roman trading center, and finally became one of the seven nations spawned by the collapse of the former Yugoslavia. Today it’s a fascinating place with a fairytale castle looming up on a hillside right in the middle of a beautiful Old World city.

It’s bisected by the Ljubljanica River, which separates the fascinating Old Town (Stari Grad) on the east bank and the New City on the west. In Old Town, you find plenty of things to do as you discover its Baroque architecture, old churches, intriguing little shops and markets, and little-cobbled streets worthy of its Old World character.

In the New City, there are several important museums, including the Modern Gallery and the National Gallery. The “New” is also the home of Slovenia’s Parliament, and the National and University Library, with its students infusing the area with a youthful feeling.

One Thing to Do in Ljubljana: Enjoy ‘s Its Quiet Elegance

Seeing both sides of the city is not as daunting as it may sound since the city is so small it’s very easy to visit it all on foot, and much of it is traffic-free. That doesn’t always mean you can get someplace quickly, however. 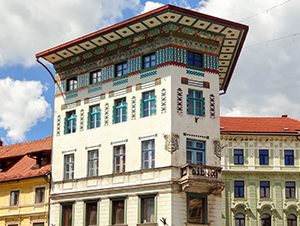 Prešeren Square on the river is a perfect place to start an exploration of both sides of the river. Although it was only a 10-minute walk from my hotel, it took me almost 40 minutes to reach the square after I found myself absorbed by the beauty of the Art Nouveau architecture along Miklošičeva Street, which I stopped to admire all along the way.

That’s the danger of Ljubljana: it’s so quietly elegant that its beauty silently draws you in.

As you walk its cobblestone streets, about beautiful fountain-studded plazas, and along the streets lined with Baroque, Art Nouveau (some of the best preserved in this area of Europe) and 20th-century architecture, you pause to admire and quickly lose track of time.

One of the Top Places in Ljubljana: Old Town 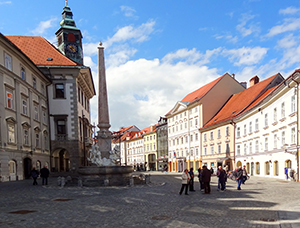 At Prešeren Square I crossed the Triple Bridge into the Old Town and headed straight up the street to the beautiful Baroque Robba Fountain of the Three Rivers (it’s a replica; I found the original in the National Gallery over on the left bank). When I walked along the street near the nearby City Hall, I immediately felt I had stepped into another century.

I walked about a bit, looking at the many cafés and poking my head into several small shops.

I was then drawn by the tolling of bells that reverberated down the cobbled streets over to St. Nicholas Cathedral, a small, beautiful Baroque cathedral.

I stayed for a while, sharing the church with a Japanese tour group that rushed through, their guide hurrying them in the back door and out the front without stopping. After a few minutes, I followed them out and soon found myself in the middle of the city’s outdoor market.

A Popular Place in the City: The Market Colonnade

The market was a tidy, little colorful place, filled with vendors selling fruits, vegetables, and clothing. Squeezed between the woods running down the hill from Ljubljana Castle above, and the Market Colonnade on the riverbank, which was a long, low building of little cafés, cheese and butcher shops, and bakeries. Regardless of the time of day I passed, I always saw people engrossed in conversation at its little tables, sipping coffee or beer. 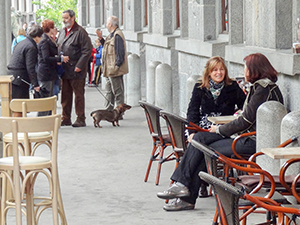 Café in the Market Colonnade

At one end of the Colonnade, there were a few stands selling little art nouveau glass figurines and other trinkets. A group of Americans had gathered around their guide near one of them, she telling them where their bus would meet them later in the day.

At the other end of the Colonnade was Ljubljana’s famous Dragon Bridge, with a dragon sitting atop a pedestal at each end. The symbol of the city, it’s one of its more photographed attractions and just a three-minute walk from the modern glass funicular that goes up to the castle.

I took the funicular up to the castle (€8 per adult, €5 for those over 60) to walk its ramparts and also see the view of the city rooftops with the snow-capped Karavanke Mountains in the distance. Later while walking around I mistakenly entered a gift shop thinking it was the entrance to the coffee shop that overlooked the castle courtyard. 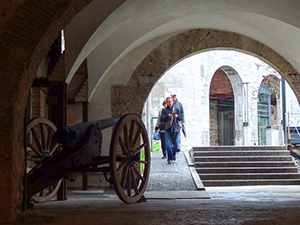 It was selling quality local crafts, including scores of good-luck flying witches. Everything in the shop well made and I would have bought a few things if I thought they would fit into my carry-on.

About an hour later I walked along the road through the forest back down to the Old Town and spent the rest of the day just wandering aimlessly. All of the Old Town, as well as a good-sized area on the left bank, is car-free, open only to pedestrians and bicycles. It helps keep the pollution and noise down, which is probably one of the reasons the city is so tranquil and clean.

Into the New City

The next morning I returned to Prešeren Square and walked up Copova Street, heading for the National Gallery, which like my hotel was only about 10 minutes away. Copova, like most of the Old Town, was also a pedestrian zone with an interesting mix of shops and crowded cafés. Needless to say, I again fell behind my self-imposed schedule as I made many stops along the way. 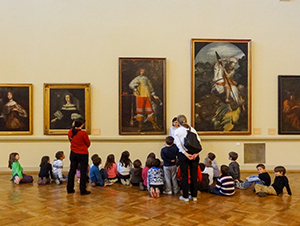 School children in the National Gallery

The National Gallery is in a beautiful and elegant 19th-century building connected to a modern one, where you enter.

The first thing you see in the lobby is the original of Robba’s Fountain of the Three Rivers of Carniola, replaced by the replica in the Old Town. I thought how glad I was it was rescued from the street since I could see the toll the weather and elements had already begun to take on it.

The museum is filled with small, interesting collections, but most spectacular is the superb interior of the old building itself. Wandering about, I entered one room that was dark, with the paintings lit only by small spotlights from the ceiling, making them look as if they were floating in the air.

A Beautiful Embassy, A Non-Descript Parliament 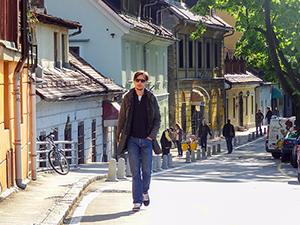 A street along the Ljubljanica River

Leaving the gallery, I came to the U.S. Embassy right around the corner. It’s in a beautiful, historic late-19th century home, and when I stopped to read a brass plaque on the fence in front, a guard with a camera around his neck approached me.

Without saying a word, he handed me a card with the history of the building printed on it, obviously wanting me to move on. As I continued along the sidewalk, I looked back and saw that another guard had come out to watch where I was going.

I crossed the street and turned at the next corner when I saw the Maxi Center, a small upscale shopping center near a row of beautiful old buildings. In the courtyard of the buildings was the Parliament Pub, filled with students and others enjoying the warm spring day. 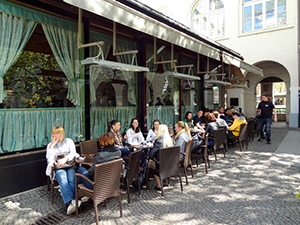 Café near the National Assembly

But the real showstopper, across the street from the Maxi, was the National Assembly and Slovenia’s Parliament building that is so nondescript I almost walked right by it. What caught my eye, though, was the beautiful bronze sculpture at its entrance, showing scores of intertwined figures depicting, as far as I could tell, everyday life in Slovenia.

Further along, I walked through Congress Square where I saw another beautiful old 19th-century mansion, which to my surprise turned out to be the University of Ljubljana. I continued walking back towards Prešeren Square, where I found five street musicians performing near the statue of national poet France Prešeren.

I joined the dozens of people who sat sipping a beer or afternoon coffee outside a nearby a café to watch the performance. For me, and I suspect for those café-loving Slovenians, it was the perfect ending to the day.