You can thank a 1755 earthquake for making Lisbon, Portugal the popular and pleasing city it is today.

Following that catastrophe – the shocks of which were felt as far away as Italy – Lisbon’s city center was carefully re-planned and rebuilt in a grid pattern with elegant streets. That 18th-century rebirth now provides the 21st-century traveler with one of the more pleasant urban experiences in Europe.

The following is a list, in no specific order, of the top 12 places (plus one additional) to see on a visit to Lisbon. Keep in mind this beautiful city takes much more than a day or two to experience and enjoy.

One of the Top Things to Do in Lisbon: Walk Through the Alfama

The Alfama is the old hilly area of Lisbon, where the steep, cobblestone narrow streets seem to run off in every direction. Wrapped around the hill below St. George’s Fort, it was once the most upscale residential area of the city back in Moorish times.

Even though its upscale residents moved elsewhere in the city long ago, the area still retains Casbah-like feeling and design. Its winding narrow streets and lanes are lined with compact homes, grocery stores, and little cafés, as well as Fado clubs that come alive long after the sun has set. Wander about here, and you’ll feel like you’re walking about some little village that time has forgotten.

Along with Belém Tower, Castelo de São Jorge is one of Lisbon’s most recognized sights. Built by the Moors to defend against invading Christian forces, it occupies the top of the hill above Alfama. Inside one of its towers, a camera obscura offers a unique 360-degree of the city. Despite its imposing battlements and museum, most visitors only visit the castle for the superb view of the city below.

The best way to reach the castle is by taxi (quite affordable in Lisbon), bus 737 from Praça Figueira, or via Tram #28 (although the latter doesn’t go all the way up). Then walk back down to the city through charming Alfama.

About halfway back down to the city from St. Georges, you’ll see the Sé, the city’s fortified Romanesque cathedral. The 1755 earthquake destroyed much of the original 12th-century building; what stands today is an amalgam of architectural styles.

Nevertheless, it is a beautiful building that was built atop the Roman and Moorish buildings (the city’s main mosque) that previously stood on the site. You can view the archaeological excavation if you pay the fee to visit the cloister. The closest metro station is Baixa-Chiado.

Commerce Square and the Commercial Center (Praça do Comércio and Baixa)

After the devastating earthquake, this was the area of the city that was so beautifully rebuilt. It’s an urban beautiful walking area stretching from the Praça do Comércio on the river, up through the town past Rossio, site of the neoclassical Teatro Nacional de Dona Maria II and the statue of Dom Pedro IV, Brazil’s first emperor.

Start on the river at Praça do Comércio, where boat passengers used to disembark to enter the city. Stand in the square and then walk beneath the huge Arco da Rua Augusta and you’ll feel as though you’re making a triumphal entrance yourself.

Continue on up along Rua Augusta, a pedestrian-only street lined with tourist-filled cafes and shops and covered with patterned cobblestones. When you come to Rua Sta. Justa, turn left and walk a block or two to the old Santa Justa Elevator.

A Thing to Do in Lisbon: Ride the Santa Justa Elevator

The Santa Justa Elevator does seem a bit odd: a wrought-iron frame elevator, which looks as if plucked from the Eiffel Tower, sitting in the center of Lisbon. But there is a connection here, however: it was built by an apprentice of Gustave Eiffel.

The outdoor elevator was built in 1901 to connect Baixa with the Bairro Alto neighborhood above, an area of pricy shops, restaurants, and Fado houses.

It’s a bit eccentric, but interesting nevertheless, with its wood cabin and original brass fixtures. As you’d expect, today it’s mostly used by tourists, not locals, for the 105-foot ride to the top, and even in the off-season, you sometimes find a queue.

To non-Portuguese, this museum’s name is a bit misleading since this museum is actually Portugal’s national gallery. It’s a beautiful treasure trove of European art from the 14th – 19th centuries. As might be expected, it’s the most complete collection of Portuguese art in the world.

But, among other treasures, it also has the most complete collection of 18th-century French silverware anywhere. Here you’ll also find works by Hieronymus Bosch, Albrecht Dürer, Hans Holbein the Elder, and Giambattista Tiepolo, among many others.

The entire collection is housed in a 17th-century palace located on the riverfront west of Praça do Comércio. 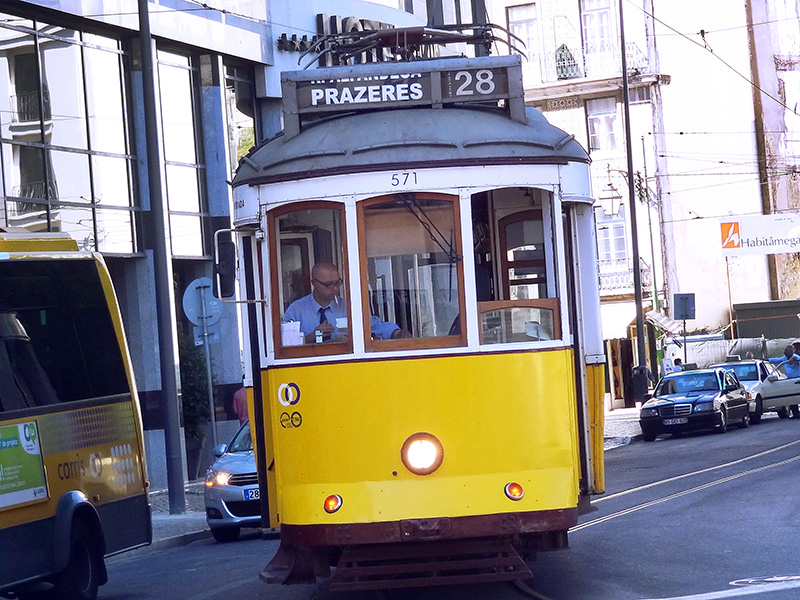 Yes, it’s part of the city’s transportation system. But it’s also one of the most popular attractions in the city, as well. Tram #28 is an old wooden trolley that the city fathers keep in use mainly because it’s so popular with tourists. Hop aboard, and you’ll find out why for yourself.

It’s a fun ride aboard this rickety old tram, as it rocks and rolls its way through the streets on its way up to Alfama. It tends to get quite crowded (watch out for pickpockets, especially at night), but it’s part of the fun Lisbon experience.

One of the most popular areas of Lisbon is Belém, which lies downriver from Praça do Comércio and closer to the Atlantic. It’s where you’ll find the Belém Tower, for many the symbol of Lisbon. When built as a fortress in the 16th century, it sat in the middle of the river. Today, though, due to land reclamation and the shifting river, it’s now accessible from land.

A newer monument, constructed in 1960 to commemorate the 500th anniversary of the death of Henry the Navigator and the Golden Age of Discovery, is the Monument to the Discoveries. Near Belem Tower, it’s a massive waterside monolith resembling the prow of an old Portuguese caravel, the ships the Portuguese used in their explorations of the world. 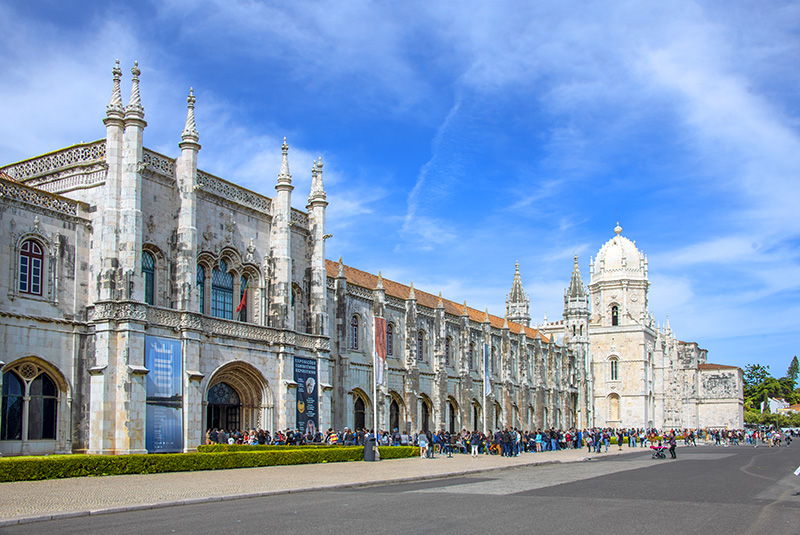 Also in the Belém area, is the famous 16th-century Jerónimos Monastery, a stunning place of great cultural and historical importance. Built by King Manuel I – for whom the style of architecture, found here and at the Belém Tower, is named – it commemorates Vasco da Gama’s 1498 discovery of the sea route to India. Inside you’ll discover da Gama’s tomb.

The monastery was built for the monks of the Order of St Jerome. Their duty was to pray for the king’s soul and the comfort sailors. After the order was dissolved in the mid-19th century, the beautiful building was used as a school and orphanage.

Although it is less than 60 years old, the Museu Calouste Gulbenkian is one of Europe’s celebrated museums. Set in a park on the northern side of the city, it’s a gem that houses the collection of an oil magnate who bequeathed his collection to Portugal. Although the collection is vast, the museum remains manageable for visitors.

Its collection includes such treasures as a 4,000-year-old Egyptian bowl; Roman medallions commemorating the Olympic games held in Macedonia in AD 242; and works by Rembrandt, van der Weyden, Van Dyck, Rubens, and Edouard Manet, among others. It also is home to an extensive collection of Lalique and some of the best-preserved Persian and Turkish 17th-century carpets in the world.

For years during several visits to Lisbon, I ignored the National Tile Museum. “Who wants to look at a bunch of old tiles,” I reasoned, “when there were so many other places to see in the city?” On a recent visit to Lisbon, I discovered how very wrong I’d been.

Azulejos, or ceramic tiles, are a unique part of Portuguese art and culture. In fact, they’re also historical since the Portuguese were taught to make them by their Moorish conquerors. You’ll see them all over the country along sidewalks and shop fronts as well as in churches and chapels.

In the Museu Nacional do Azulejo, you’ll a spectacular and colorful collection all set in a 16th-century convent. The cloisters are pretty, the church magnificent. If possible, visit in the morning since the museum’s café serves good and reasonably priced lunches.

Aptly, and frequently, described as a “Miniature Versailles,” the National Palace is located only 15 minutes or so from central Lisbon. It was built as a summer palace in the mid-18th century and later extended by a French architect, thus the Versailles resemblance. It’s one of the last grand Rococo edifices built in Europe.

It’s a stunning place, as one might suspect, with beautiful chambers, pavilions, and music and throne rooms. There are two beautiful formal gardens between the asymmetrical wings of the palace. 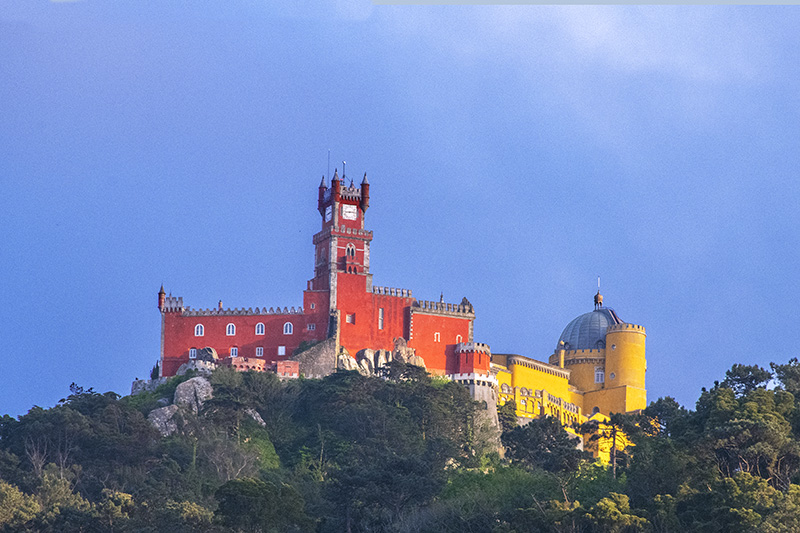 Sintra is not in Lisbon per se, but about a half-hour drive to the north. The summer retreat of Portuguese kings from the 13th to 19th centuries, it’s a UNESCO World Heritage Site that’s a great day trip outside the city. In addition to driving, it’s also reachable by train ($2-3 from Rossio Station)), bus ($1), or with a tour group, the latter being the easiest.

The palace, a mix of architectural styles ranging from Moorish to Baroque, is set in the wooded hills above the town. The town of Sintra is also quite lovely but can become nightmarishly crowded in the summer, especially on weekends.