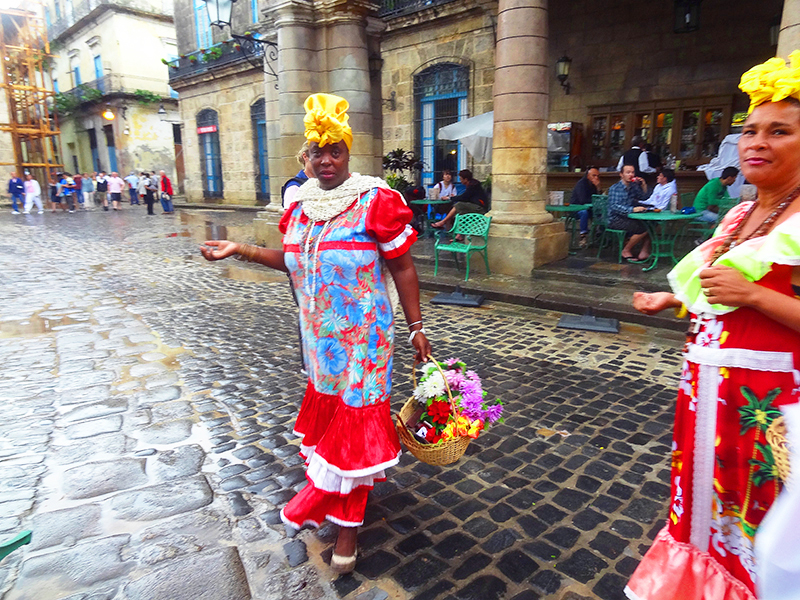 Cuba is an amazing place, and Havana even more so. For decades the city has been caught in a time warp, and the Havana you visit today is the Havana of 50 years earlier. It’s a wonderful experience for travelers, one you’ll find in few other places in the world. It was Prohibition in the U.S. that first brought mass tourism to Havana.

At a time when booze was banned in America during the 1920s and early 1930s, Havana offered a foreign culture of cocktails and casinos that quickly attracted the rich and famous. It also attracted the not-so-rich and infamous, and the combination turned the city into the party-land of the Caribbean – all just 90 miles off the coast of Key West.

Tourism in Havana and Cuba cooled quickly during the Cold War, and during the next 50 years, life and culture in Havana stood still. The city was trapped in a time warp.

Today, as relations between the U.S. and Cuba begin to thaw, Havana sees its second heyday.

But instead of being lured by free-flowing liquor and a clutch of casinos, most Americans are drawn by the desire to experience Havana as it was 50 years ago, to experience the warp and see the city before it changes.

If you want to take a step back in time, now may be the best time to visit. 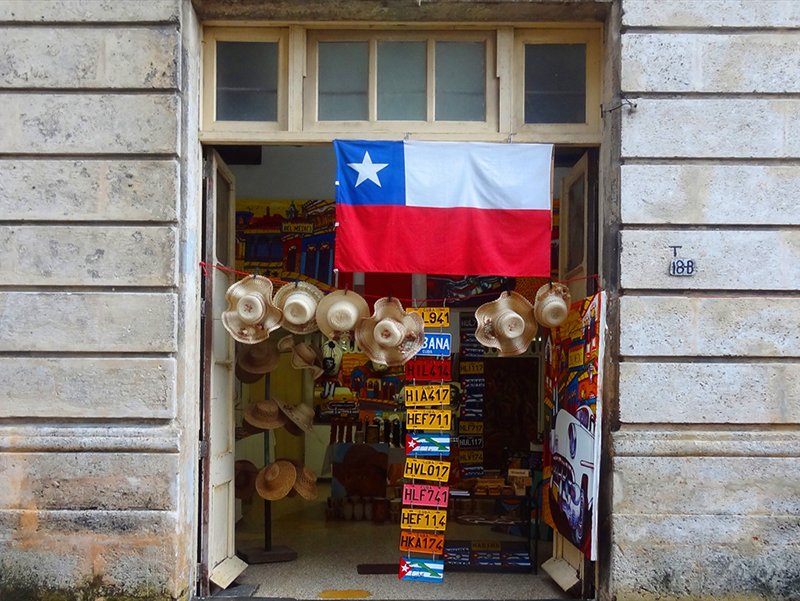 A shop in Havana

A Tour of Cuba

I’d always wanted to visit Havana and finally reached it on a Grand Circle Foundation tour, which began in eastern Cuba, and ended with four days in Havana. It was not a luxury vacation but we were comfortable nevertheless, and it was, as promised, culturally rewarding. I highly recommend it.

We did a lot in Havana – visiting a dance company, learning to play dominoes with a Cuban national champion, visiting a neighborhood in which colorful murals and a self-built community center transformed the barrio, and meeting with artists and an urban planner, among other activities.

Our schedule was full, but we still had plenty of time to wander about on our own.

Get Your Guide is a great company that offers good, popular tours and discounts all over the world. Here are 5 of their interesting tours in Havana: 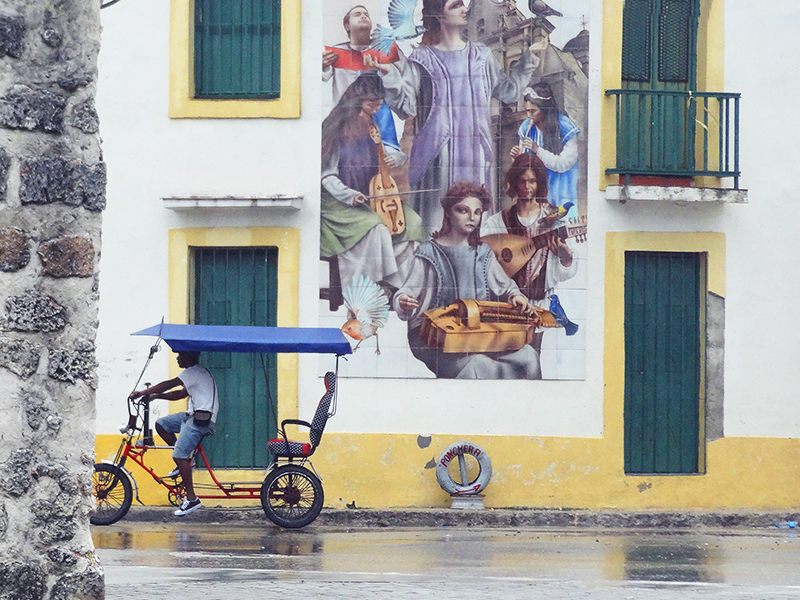 The Race to Transform the City

It’s evident that the city’s infrastructure is also caught in the 1950’s time warp, and the government is making badly needed repairs to attract tourists.

Many of the most visited tourist areas of Old Havana have been fixed and renovated, with streets newly and neatly paved, and buildings freshly painted.

Just a few blocks away, though, you encounter streets and sidewalks filled with huge potholes, and dilapidated, crumbling buildings, which would be condemned in most other countries but where people still live today.

What’s so incongruous about Havana is that despite their near-horrific living conditions, the majority of Cubans remain very happy people who continue to embrace their culture and music. 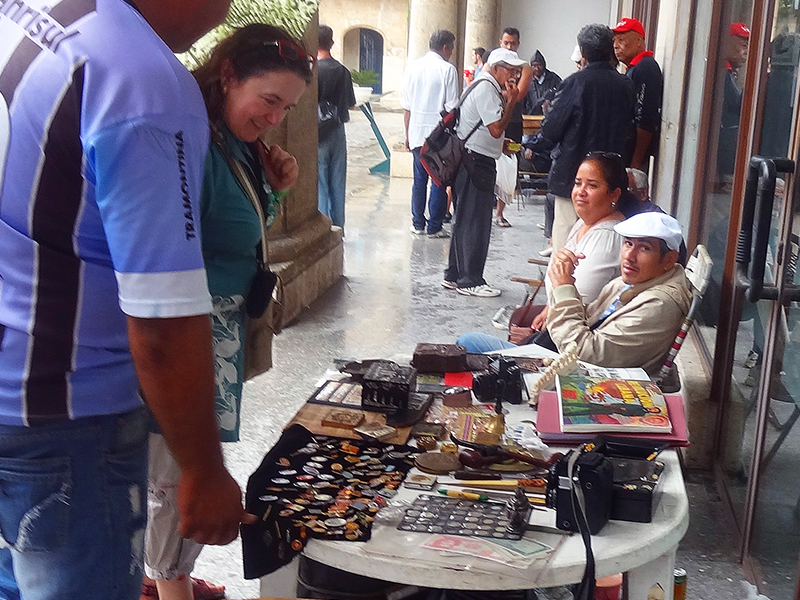 A sidewalk-flea market in Old Havana

A Must-See in Havana: Habana Vieja

One day during a lunch-on-your-own afternoon in Habana Vieja (Old Havana) I set out to explore the area about Plaza de la Catedral, one of the most popular attractions in the city and one of its most beautiful squares. It was a captivating place, not so much because of the church that was no longer in use, but because of the color that ebbed and flowed through the square.

There were vendors all about selling handicrafts and a lively café/restaurant along one side. But the stars of the show were the Cubans walking about the plaza … women dressed in flamboyant African-Cuban costumes, men in gaudy suits … offering to have their photos taken for the equivalent of a dollar.

Several were chomping on huge foot-long cigars, further adding to the circus-like atmosphere. 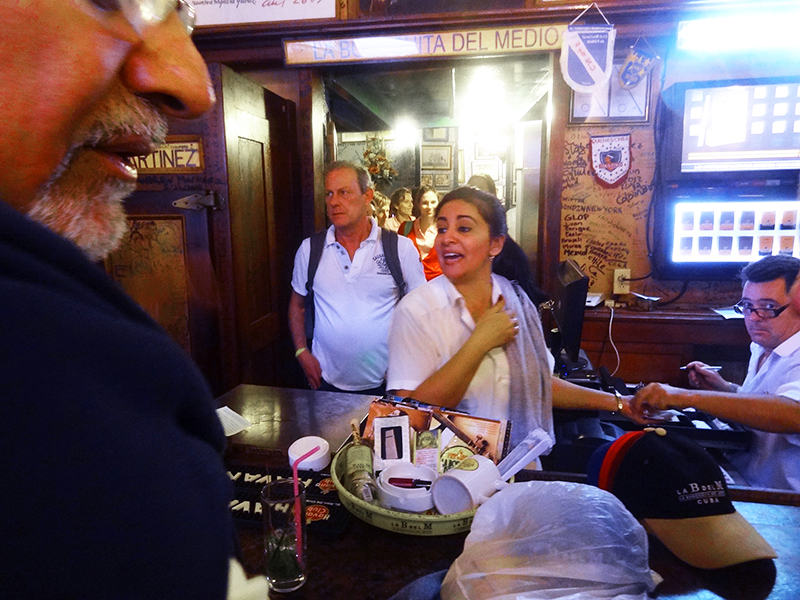 Tourists and Cubans in one of Hemingway’s favorite haunts, La Bodeguita del Medio

A Fun Thing to do in Havana: Search for Hemingway’s Haunts

I walked up Calle Empedrado, adjacent to the Plaza, to the nearby La Bodeguita del Medio halfway down the calle. It was one of Hemingway’s favorite bar/restaurants and when I arrived found a large crowd outside it.

After ferreting my way through the throng, I discovered a larger crowd inside, a mix of tourists and locals.

Beyond the bar was a series of rooms, all with autographs and photos of famous people covering the walls.

Entering La Bodeguita was taking another step back in time. I took an additional step at another of Hemingway’s Havana haunts, the bar Floridita. It was there he supposedly helped invent the daiquiri, and there’s a life-size bronze statue of him standing at the bar. 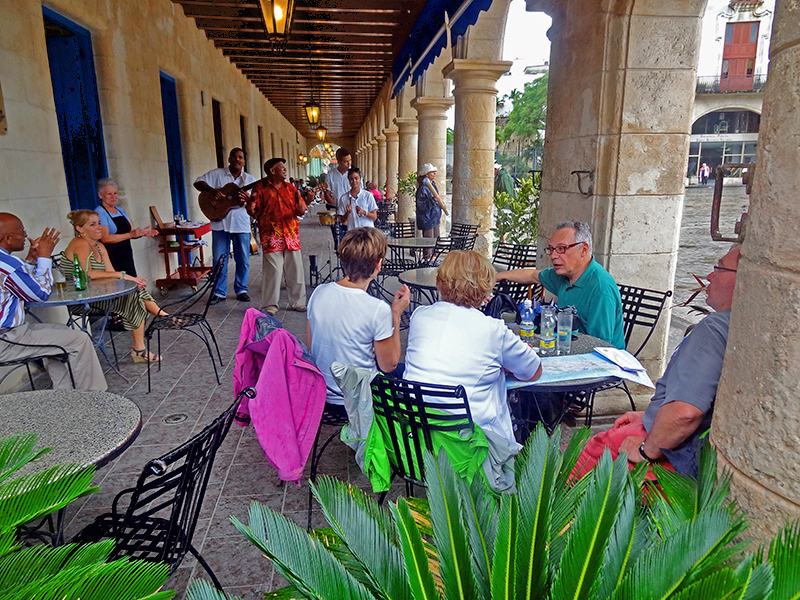 A cafe in Old Havana

La Bodeguita was a lively place, one in which I would have liked to have lunch, but time was short, so I headed back to the far end of the plaza. I watched the show there for a while, intrigued by all the movement, color and interaction between the locals and tourists.

Then I saw that many Cubans were only crossing the plaza to wander off into another neighborhood. I joined them as they led me along several different streets.

After walking a few short blocks, I wound up in a lively neighborhood filled with numerous little shops and stores, with music wafting from crowded bars. There were several little restaurants filled with a mix of tourists and locals wandering the streets. It was a fascinating and colorful couple of hours. 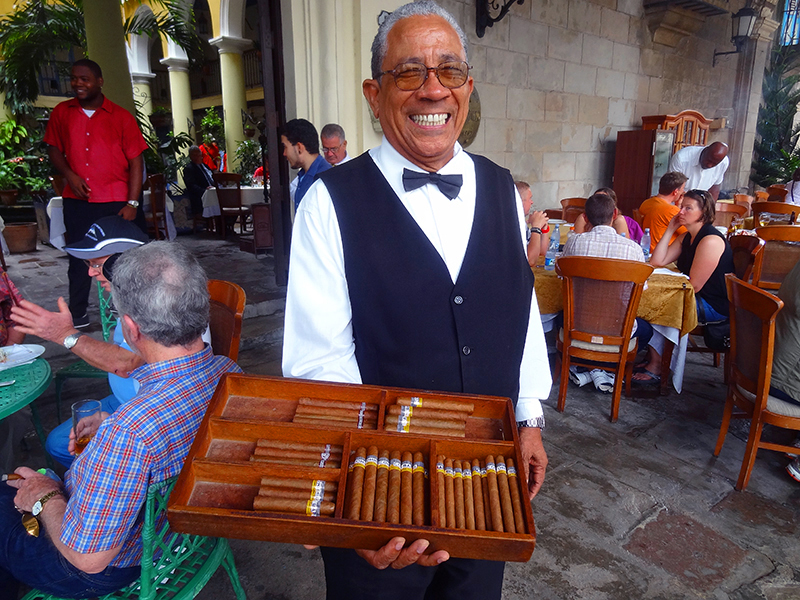 Waiter in one of the restaurants in Old Havana

Despite a Dismal Restaurant Scene, a Welcome Surprise

Throughout our time in Havana, we had the days pretty much to ourselves and we wandered all about the city. Food in Havana, and all over Cuba, isn’t very good due to the land being heavily fertilized for decades to produce sugar for the Soviets. So we stuck to the hotel restaurants and larger tourist restaurants where the food was much better.

Later that afternoon, however, our tour guides, one American, the other Cuban, took us across the city to a barrio that had been transformed by the residents. It was a pretty amazing place where neighbors had joined to use street art to transform a drab rundown neighborhood, and also built a community center.

We spent the evening there, listening to music played by local musicians. That was followed by a surprisingly delicious dinner prepared by women in their barrio homes. It culminated with us all partying up on the roof terrace of the small center as a local combo played the 70s and 80s Rock & Roll with many from the neighborhood and our group dancing along. My wife and I ended the evening doing the Lindy to the local rendition of Little Richard’s Tutti Frutti. 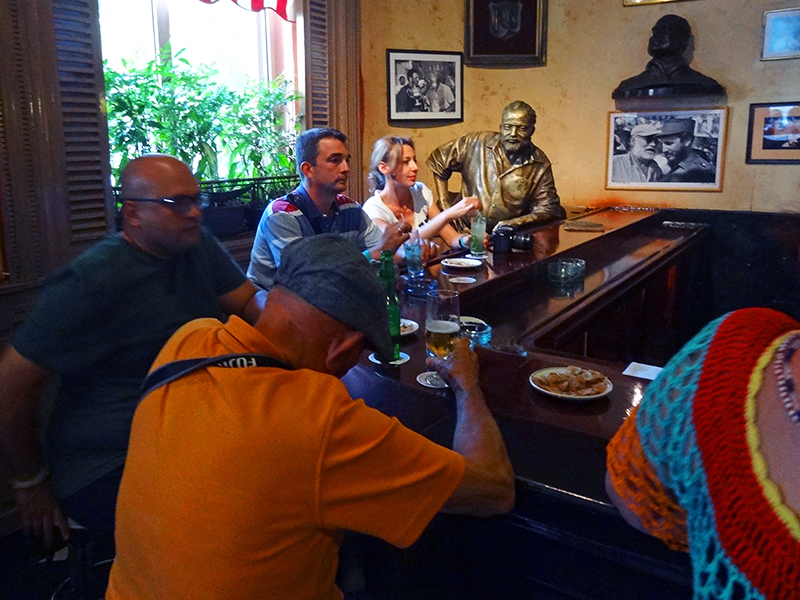 The bar at Floridita, with Hemingway’s statue

My Search for Hemingway and a Cadillac

We visited more of Hemingway’s haunts and searched out the bar Floridita. Some contend it was his favorite bar, and the owners keep the legend alive with a full-size bronze statue of him at the end of the bar where it’s said he used to sit.

One afternoon my wife and I jumped on the opportunity and hired a car to take us to Hemingway’s old home outside the city. The author had long lived in Cuba, writing several of his famous novels there.

I had another agenda also. There were many old American cars marooned in Havana following the Revolution, and for the past four days, I had been photographing them. I had already seen many Chevrolets, Buicks, DeSotos, and Fords but no old Cadillacs, so I asked the driver to be on the lookout for a vintage one on the way to Hemingway’s.

While our search for the Cadillac turned out to be futile, we spent an interesting hour at the Hemingway house. No one is allowed inside the house, which was left the same as it was when Hemingway left in 1960, and you can only look through the doorways and windows that open to every room. A two-story tower at the rear of the house, which provides a view out over the valley, housed the author’s office. 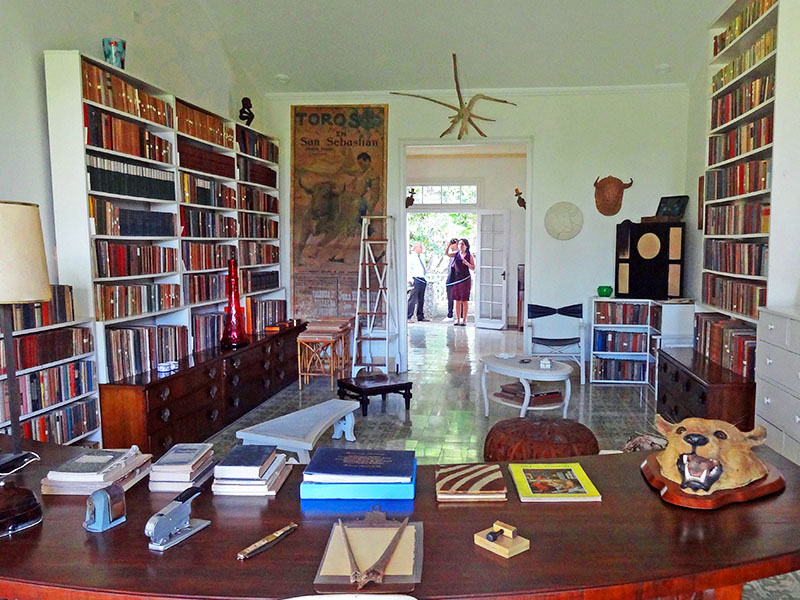 The land was almost park-like, and we followed a path back to a large empty swimming pool. Alongside it, we found a small pet cemetery in which four of Hemingway’s favorite dogs are buried, which I thought was quite incongruous since at his Key West home he had a cat cemetery.

But the real star beyond the pool was the Pilar, Hemingway’s impressive fishing boat on which he not only went deep-sea fishing but also used to watch for German U-boats during World War II, providing his intelligence to U.S. officials. 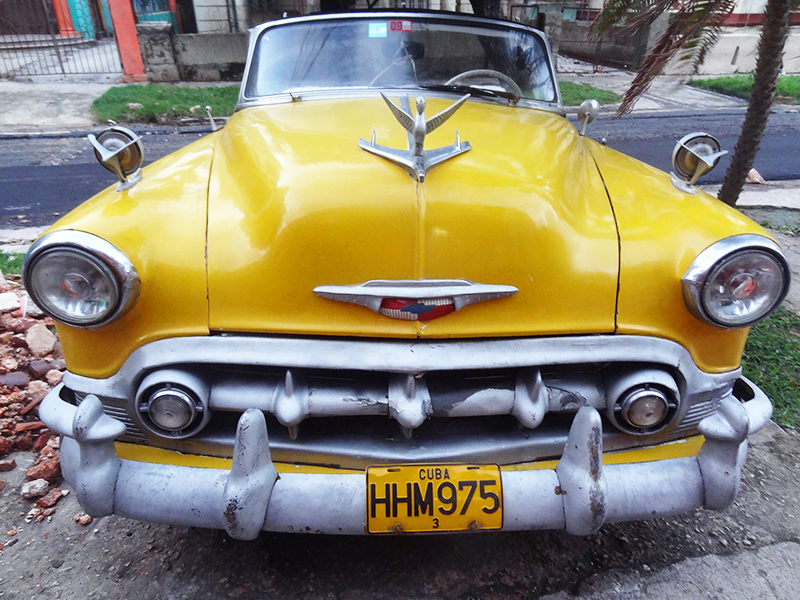 One of Havana’s famous American cars

That night our group had a very good dinner at a paladares, one of the private home restaurants that have been popping up in modern-day Havana. It was our farewell dinner, one that we were all enjoying until our tour guides announced that the bus that had brought us had broken down. The only alternative, we were told, was a 20-minute walk back to our hotel since taxis were not running at the time.

None of us was particularly thrilled with the idea, but we had been warned beforehand that flexibility was key in dealing with the aging Cuban infrastructure. After a few moans and groans, we decided to get on with it and set out from the restaurant.

We all walked down the street in the dark, there not being an abundance of streetlights in Havana until we got to the far corner at which time our tour leader shouted: “Here we are – there’s no more walking!” Lined up on the side of the road was a line of vintage Chevys, Buicks and, most gratifying to me, a 1952 Cadillac convertible.

With my wife and another couple we bolted to our Cadillac time capsule, and joined the other vintage cars in a conga line that sped down the street. Horns were blaring, and several of us were yelling and screaming like kids after winning a high-school football championship.

It took us about 10 minutes to get to the hotel, 10 minutes none of us will forget. It was a perfect ending to four fascinating days in Havana.

If you want to enter the time warp, now may be the time to go.