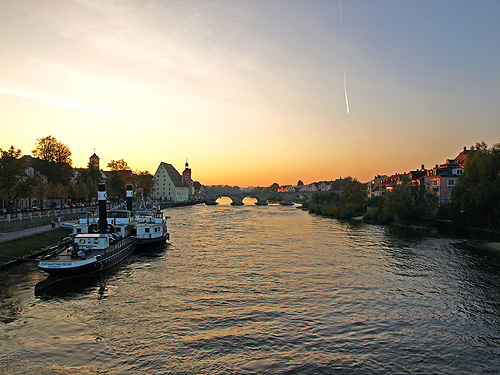 I knew little about the 2,000-year-old city of Regensburg, Germany when I boarded the River Countess for a cruise along Germany’s Main and Danube rivers.  Only that it is a medieval city, a UNESCO World Heritage Site and the first stop on Uniworld’s Danube Discovery itinerary.  But what a discovery I was about to make. 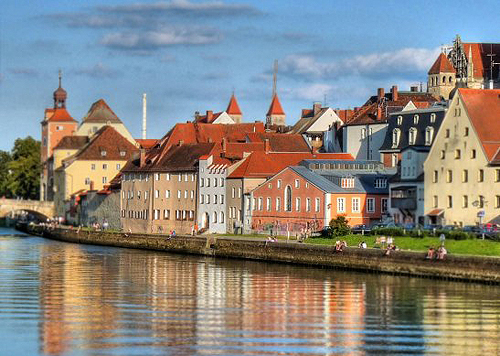 The Danube at Regensburg / photo: joiseyshowaa

During the night, the Countess had cruised from Nuremberg to Regensburg and when we awoke on that November morning it was like a fairytale.

My daughter-in-law Gisele, awake and about before me, woke me up with an expression of amazement and joy.  “Look …. look,” she said, as she opened the drapes. Our ship had docked near the altstadt, the old town, and I looked out from my bed and saw the streets and spires of the medieval town slowly being covered by gently falling snowflakes. 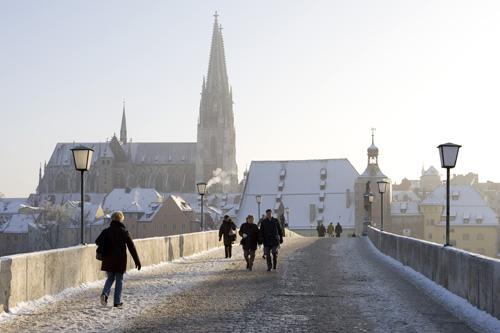 While the itinerary’s walking tour had its appeal, later that morning Gisele and I decided to explore the town on our own. Leaving the ship we turned toward the altstadt at the old Stone Bridge, a 12th-century Regensburg icon.

We soon came upon the aptly named, Historische Wurtsküche, the Historic Sausage Kitchen, a 1,000-year-old sausage kitchen and restaurant. It’s the oldest sausage kitchen in Europe (people in Regensburg claim it’s the oldest in the world) and regardless of the time of day the spicy aroma of its sausages permeates the air in the streets surrounding it. 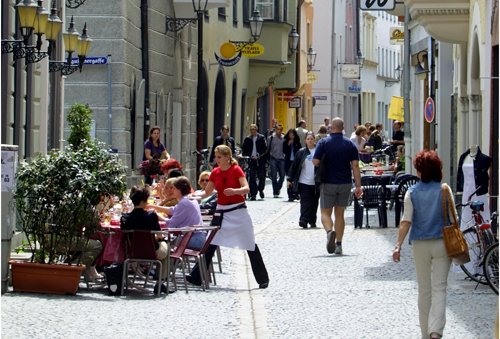 There was always a crowd at the restaurant and we figured we would have no trouble finding delicious sausage options elsewhere in Regensburg. We were right, for throughout the altstadt we found a number of bustling beer and wurst restaurants, some with their own brewing equipment in-house.

On the main platz in an historic building we found a department store, Kaufhof, part of a German nationwide chain.  It sold everything from clothing and toys, to food and drink.  On the lower level was the grocery store, laden with beer, wine, mustards, canned goods and a huge variety of meats and potato chips, unlike any I’ve ever seen before.  I brought home goulash soup and potato soups to get me through the winter. 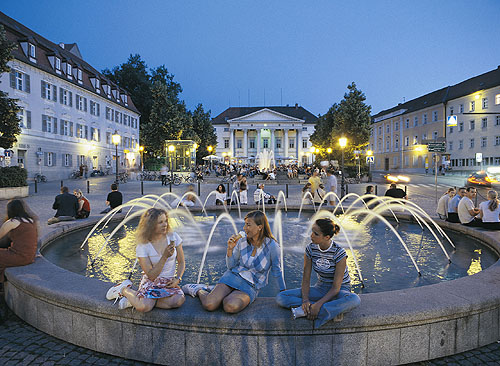 Because of its 2,000 year-old history — preserved since Regensburg did not suffer from allied strikes during World War II — Regensburg remains a jewel-like city. The old town sparkles with history and awe-inspiring architecture, from the quaint town square to the magnificent churches with their towering spires.

It has numerous platz, pedestrian town squares, all bordered by buildings that reflect the era in which they were constructed, and narrow pedestrian streets, alleyways really, zigzag through the old town. 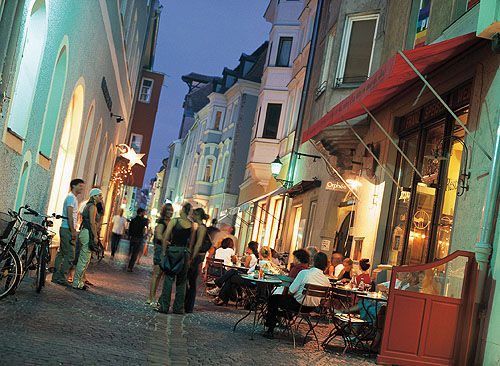 The shopkeepers in the altstadt are friendly and accommodating, just what you’d expect to find in a small town. When Gisele could not get her international phone card, which she bought in a little tobacco shop, to work, the shop owner used her own landline to connect her to her mother in Brazil.  Even the waitstaff in restaurants, who may speak little English, will try to describe a dish, even if it means showing you a plate of it.

Regensburg offers many visual and emotional surprises and, despite it being small and compact, we got lost (surprise!) many times wandering through its old town.  But it’s that wandering aimlessly in foreign towns, I’ve discovered over the years, that never fails to unveil an unexpected treasure here and there. 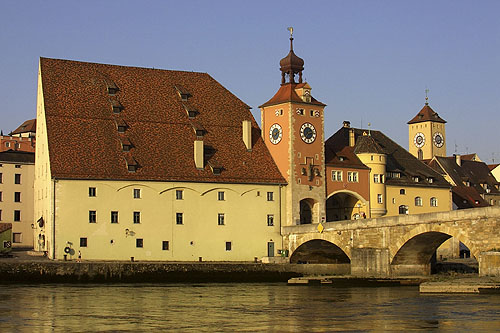 Down one little alleyway, I noticed a plaque on the exterior wall that turned out to be another of those unexpected treasures.  As we neared it, I was struck by the name on the plaque, Oskar Schindler.  Written in German, a language I’m quite limited in, the plaque described Schindler’s refuge in Regensburg shortly after World War II ended.

There are 1,200 historic buildings in Regensburg and, if it takes ten more trips there to do so, I want to see them all.