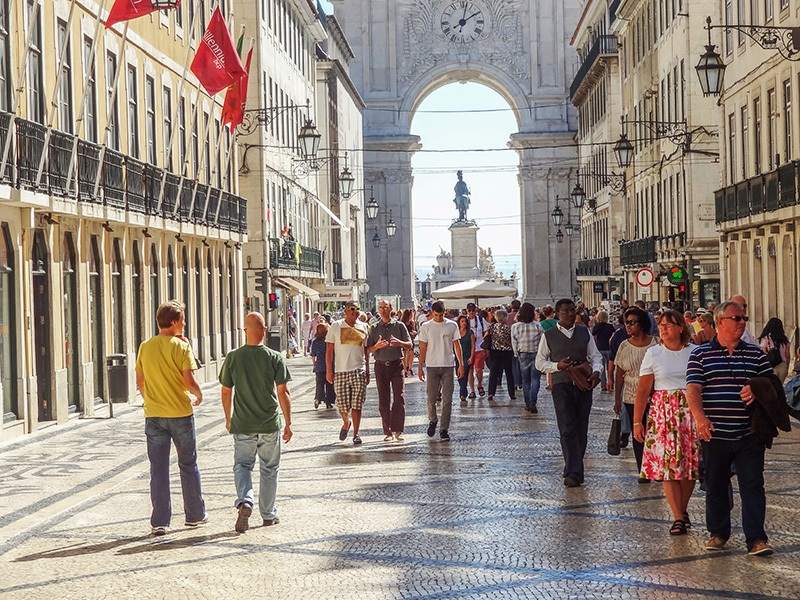 Lisbon has always been the most popular destination in Portugal, even more so in the past few years. But given its size, the country is amazingly diverse. So do yourself a favor – spend a few days in the capital and then head further afield…

For too many years Portugal was given short shrift by Iberian-bound travelers who focused almost entirely on neighboring Spain. 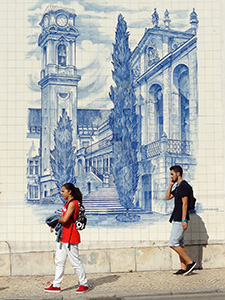 That began to change dramatically several years ago during Lisbon’s new renaissance. It was a time when scores of upscale hotels and hip new restaurants took root in the city. As a consequence, the capital that was once an afterthought became a star on the European tourist circuit.

Moreover, Lisbon’s popularity continues to grow today as record numbers of travelers flock to the city. But if you’re part of that flock you’ll do yourself a favor if you continue beyond the capital. You’ll find there’s plenty to see beyond Lisbon – both on and beyond the peninsula.

From the massive, dramatic cliffs that buffer the Atlantic in the south, to the soft rolling hills and vineyards of the Duoro in the north, Portugal is an amazingly diverse country. Visit the beaches of the Algarve but don’t miss historic Sagres or the historic university city of Coimbra. Stroll the cobbled alleyways of Porto, and be sure to visit fairytale-like Sintra, Lord Byron’s favorite.

Get off the beaten track and roam about remote Estremadura or through the cork forests and olive groves of Alentejo. And for a real adventure head to the Portuguese islands of Madeira or the Azores.

Here are 10 of the best places in Portugal you don’t want to miss. 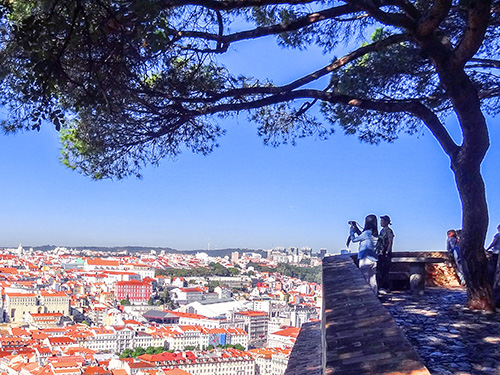 The Baixa, Lisbon’s downtown area, is still the traditional center of city life. Also it’s where Lisbon’s oldest and traditional shops still exist. In this heart of the city, is the famous pedestrian-only street Rua Augusta. Streets that run parallel to it identify the various tradesmen and craftsmen who have done business there for centuries. You’ll find jeweler’s stores in the Rua do Ouro (Gold Street) and the Rua da Prata (Silver Street).

Regrettably, the original Baixa was destroyed by the great earthquake of 1755. Afterward, it was reconstructed by the king’s prime minister, the Marquês de Pombal. As a consequence, it’s still popularly known as the Baixa Pombalina. It has a uniform and rectangular layout that makes no distinction between the various social strata that live in the area.

First and foremost, don’t miss visiting the Alfama, the old hilly area of Lisbon. It’s wrapped around the hill below St. George’s Fort. It escaped the destruction of the earthquake and the ensuing tidal wave. It was once the most upscale residential area of the city back in Moorish times.

Go up it on Tram 28, an old wooden trolley that climbs the steep, narrow cobblestone streets. They seem to run off in every direction but you can easily walk down.

Travel Guides on Portugal I Recommend

DK Eyewitness Travel Guide: Portugal DK guides are very good both for the amount of information they contain and also for the illustrations that help guide you to a better understanding of the things you see. I use them often.

Fodor’s Essential Portugal This guide, written by locals, is one of a number of travel guides Fodor has been providing for eight decades. 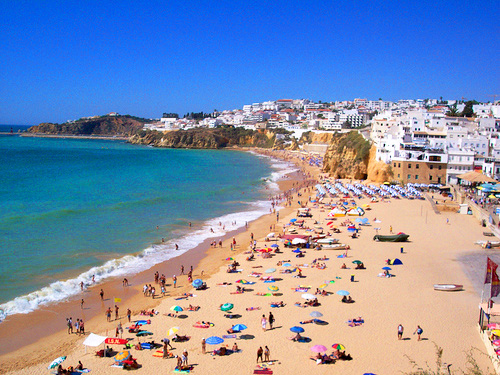 Sea, sun, and sand mark Portugal’s famous Algarve. While the region’s beaches and picturesque villages have made it world renown, the region also has some world-renowned golf courses. The area’s capital, Faro, remains nearly the same as it was in the 18th century, with some of its charming neighborhoods intact.

Lagos and Sagres on the east end of the Algarve date back to Roman times. But it was in the 15th century that Sagres achieved importance with the frequent presence of Prince Henry the Navigator.

Visit the Fortaleza de Sagres (a fortress built in the 15th century) and thought to be the site of Prince Henry’s “School of Navigation”. By the same token visit Cape of São Vicente, one of the most westerly points of the European continent after Cabo da Roca. It was also a sacred place to the Romans who called it Promontorium Sacrum. 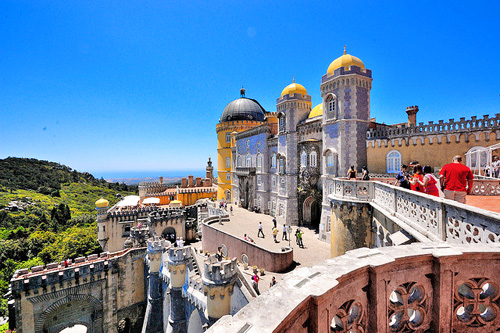 Sintra’s Palácio da Pena is one of the best examples of 19th-century Romantic revivalism in Portugal. Set at the top of the Monte da Pena, the palace was built on the site of an old monastery belonging to the Order of St. Jerome. It was the result of the imagination of Dom Fernando of Saxe Coburg-Gotha, who married Queen Dona Maria II in 1836.

After falling in love with Sintra, he decided to buy the convent and the surrounding land to build a summer palace for the royal family. This resulted in a somewhat unusual mixture of architectural styles. Moreover, he also established an English-style woodland park with a wide variety of exotic trees.

The highlight of the palace’s interior is the chapel. Its alabaster altarpiece is attributed to Nicolau Chanterenne, one of the architects of the Mosteiro dos Jerónimos, in Lisbon. Also, there’s a restaurant in one of the wings of the palace. There you’ll get a panoramic view of Serra de Sintra and the coast.

Lisbon: Gourmet Walking Tour and Tastings Savor the flavors of Portuguese food on a 3-hour tour of Lisbon’s traditional eateries

Douro Valley Tour: Wine Tasting, River Cruise and Lunch Spend a full day taking in the landscapes of the Douro Valley, traveling in a comfortable vehicle that seats 4 or 8 people

Sintra, Cabo da Roca and Cascais Full-Day Tour Medieval Sintra, one of the most beautiful places in the world, mystical Quinta da Regaleira, and Cascais, once a playground for royalty 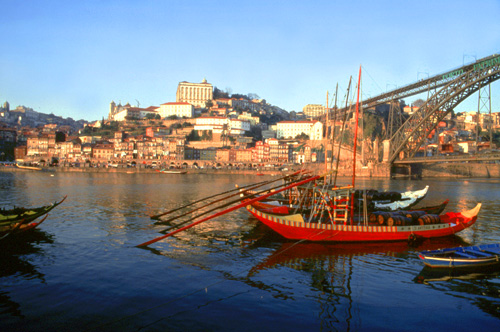 Porto and Its Wine

The gateway to the north, Porto is both the city that provided a nation with a name and a fortified wine known worldwide as Port. The second largest city in the country, it’s located at the mouth of the Douro River. Its historic center is a UNESCO World Heritage Site.

The city’s Cais da Ribeira riverfront is its center and its most picturesque part. The area has a mix of ancient narrow streets and alleyways with centuries-old buildings. Old homes of granite and tile loom over the waterfront, that’s filled with Rabelo boats and river excursion ships.

The riverfront area comes alive in the evening when numerous cafés, bars, and restaurants open. Couples stroll along the Douro, as a hint of music drifts from the bars and cafes, and the smell of coffee and grilled fish fills the air. 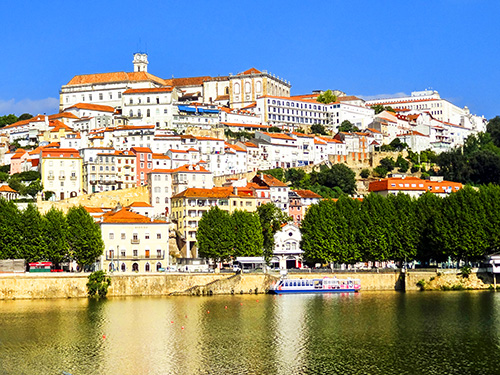 Roughly halfway between Lisbon and Oporto in the north, Coimbra was once the capital of the Portugal. However, it’s most famous for the University of Coimbra, founded in 1290 and one of the oldest universities in Europe. Furthermore, it’s a city of medieval churches and a maze of medieval streets. Presumably, that’s the reason some consider it the most romantic city in Portugal.

Overlooking the city and the Mondego River, the University is a rambling building, constructed around a central courtyard. Its entrance is through the Porta Férrea (Iron Gate), an impressive Mannerist work (1634). There one can also see the statues of the University´s patrons, the Kings Dom Dinis and Dom João III.

You’ll see students all around the city, identified by the black capes they still wear. The little colored ribbons on their briefcases denoting the school they attend. I came across a group of young female students in their capes on a downtown street singing acapella for passersby. 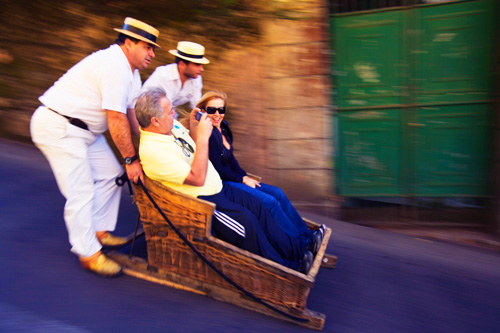 Madeira is a group of four Portuguese islands off the coast of North Africa. Funchal, its capital, is a walkable city with a nice harbor and a cathedral more than 500 years old. It’s perpetually sunny, but when the sun goes down, the tempo picks up in its nightclubs, restaurants, and casinos.

Some associate the Monte area of Funchal with wicker “toboggan rides” that first appeared around 1850. Originally, this was a fast means of transportation to central Funchal for people living up the steep hillside in Monte.

Presently, the toboggans continue to attract tourists who want to sled down a narrow, winding street to the city below. The one-mile downhill journey takes about 10 minutes, sometimes reaching a speed of 30 miles an hour. You can take a cable car back up. 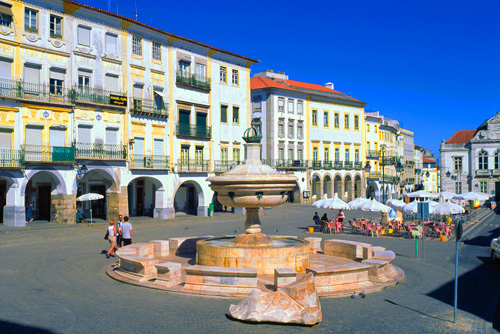 A unique and historic city, 2,000-year old Evora is labyrinthine of streets and city squares, Renaissance fountains, Moorish courtyards and Gothic doorways and turrets. The Romans created its elegant temple, battlements, and baths, and the Moorish “Yeborah” influenced the urban network of the Mouraria district.

Évora is a beautiful town at the foot of the mountain range of the same name. Consequently, its unique characteristics led UNESCO to classify it as a World Heritage site.

Incidentally, it was even necessary for UNESCO to create a special category, that of “cultural landscape.” Accordingly, this was to take into account the natural riches of the mountains as well as the historic town.

King João II chose it for the wedding of his successor to the daughter of the Catholic Monarchs.  King Manuel I established his court in Évora as did King João III.

Ironically, Praça do Giraldo of Evora, where open-air cafes now serve coffee to tourists, was once the location of public executions. 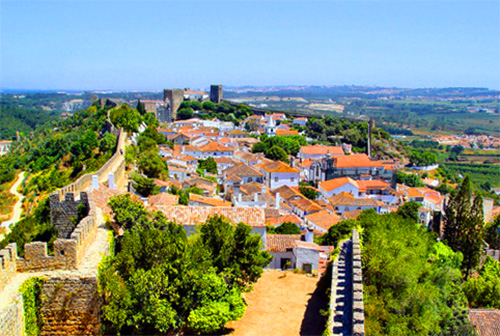 Óbidos, with its whitewashed houses covered with bougainvillea and honeysuckle, was captured from the Moors, and until 1883 the town and the surrounding land was always the property of the Queens of Portugal.

Encircled by a ring of medieval walls and crowned by a rebuilt Moorish castle, it is now a Pousada. You enter the town through the southern gate of Santa Maria, which is embellished with eighteenth-century azulejo tile.

The most important annual events in Óbidos are the Holy Week Festivities (recreating the steps on the Way of the Cross). Also, the Ancient Music Festival takes place in October and, for chocoholics, the International Chocolate Festival in March. 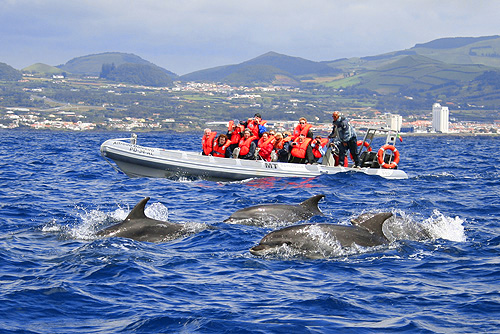 Whale-watching in the Azores

The Azores is a group of nine islands scattered over several hundred nautical miles roughly midway between Boston and mainland Portugal. In fact, it’s the closest point to Europe from the United States.

The islands are popular places for yachting and diving, as well as horseback riding, and cycling. The largest town on the islands, Vila Franca do Campo, is surrounded by orange and pineapple plantations. 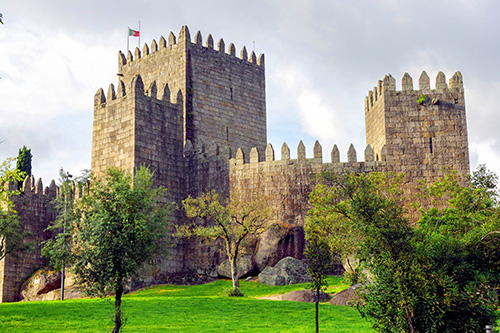 First and foremost, for the Portuguese Guimarães is a special place. It was there, in a field close to the walls of its castle, that Afonso Henriques, the first King of Portugal, fought the Battle of São Mamede in 1128. Ironically, he was fighting against the army of Teresa, his mother.

Nevertheless, his victory marked the beginning of the process that would lead to the foundation of the kingdom of Portugal.

In addition to a medieval castle, the city also encompasses the 15th century Ducal Palace, now both a palace and a museum. In the center of the town is Rua de Santa Maria, a narrow medieval street, considered by art historians to be the most beautiful in the city.