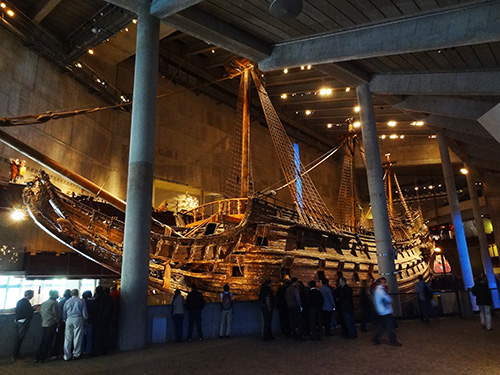 The main hall of the Vasa Museum

Over the centuries there have been few, if any, reports of ship sinkings that have been as ignominious as that of the Swedish warship Vasa.

After sailing barely ¾ mile on its maiden voyage in 1628, Vasa heeled over and sank in the middle of Stockholm harbor. 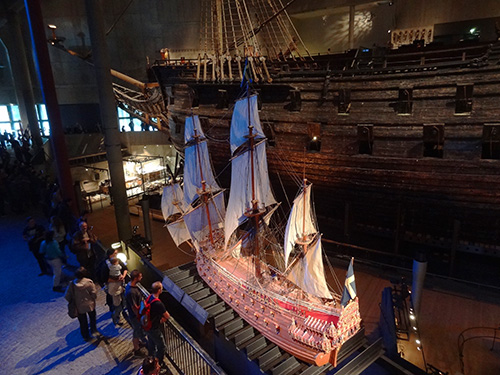 The scale model of the Vasa and the ancient ship

It was a huge warship at the time, about 226 feet long, weighing more than 130 tons and designed to carry 145 sailors and 300 soldiers.

The Vasa was finally salvaged in 1961, and painstakingly restored. For 17 years it was sprayed day and night with the preservative PEG (polyethylenglycol), which replaced the water in the wood’s cells and prevented it from drying out and splitting. 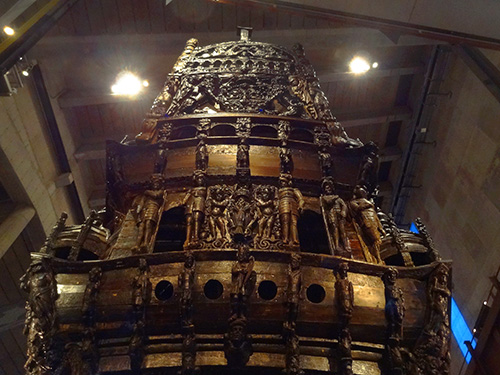 Intricate ornamental carvings on the stern

The Vasa is now housed in its own museum, the Vasa Museet, on the island of Djurgården in Stockholm harbor. Sans the paint, it looks almost exactly as it was many years back and is the only almost fully intact 17th-century ship ever salvaged. There’s no other museum like this anywhere else in the entire world.

The museum building itself is very plain, which makes the ship, as well as the other exhibits, all the more striking. It’s the most popular museum in all of Scandinavia (more than one million people visit it every year) and a visit to it is an incredibly interesting experience. 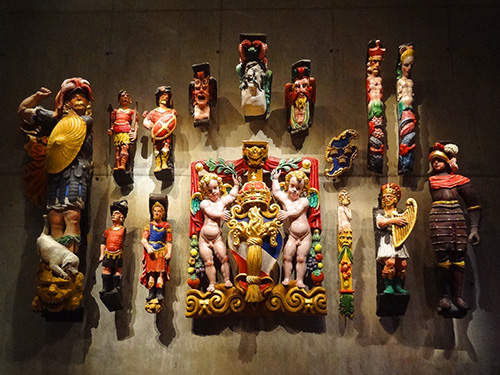 Reproductions of carvings on the ship

Although you can’t board the ship, when you first see it you can’t help but be awed. It’s huge and covered with over 500 carved ornaments. Just as interesting as the actual ship are the artifacts that were salvaged and are now on display, including an officer’s backgammon set, coins, bowls, pottery, munitions, cannon, medical equipment, etc.

A 1:10 scale model of the Vasa, which took four model builders in the Maritime Museum 12,000 hours to build, sits alongside the ship.

Across from the ship are a series of balconies that provide unique views and also contain 10 exhibits that explain what life was like aboard the ship and show the items salvaged in and around the ship. Luckily for us non-Swedes, all of the explanations are in both Swedish and English. 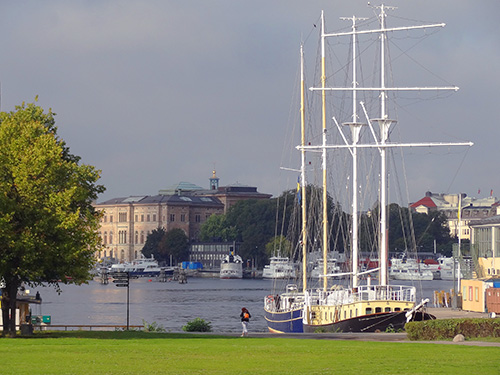 The harbor behind the Vasa Museum

If you’re interested in getting more information there are 25-minute guided tours in English that are included in the price of your ticket. The tours leave every half-hour throughout the day from under the bow of the ship. The museum also provides visitor information sheets in 14 languages.

Behind the Vasa Museum on the harbor you’ll find several more historic (and more modern) ships moored, as well as a beautiful view across the water to Stockholm and its old medieval center of Gamla Stan.

Vasa Museum
Galärvarvsvägen 14
115 21 Stockholm, Sweden
Tel: +46 8 519 548 00
http://www.vasamuseet.se/en/
Admission: Adults 130 SEK (approximately $20)
There are numerous ways to get to the museum. The easiest is by tram: from the city center (by Sergels torg square, on Hamngatan street) take tram number 7 towards Waldemarsudde. Get off at the first stop across the bridge to Djurgården Island, about a 10-minute ride. You’ll find the Vasa Museum behind the Nordic Museum.