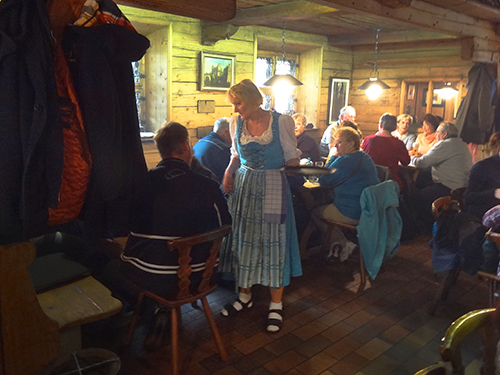 Brätwurst, or brats as they’re often called in the U.S., are a staple of many barbecues, especially in the American Midwest.

Being from the East Coast, the closest I ever got to brätwurst was its less-tasty cousin, the hotdog, consumed with relish (take that both ways) at family barbecues and beach parties. I didn’t know what I was missing until I entered the army years later.

I remember exactly where my love affair with wursts began, it made that much of an impression on me. It happened in Frankfurt, Germany (appropriately), at a little wurst cart on Kaiserstrasse just a bun’s throw from the train station. I was hooked at first bite and continued snacking on them for my entire tour in Germany.

It wasn’t until years later when I returned to Germany as a photographer and travel writer did I realize that depending on where you were in Germany you could have different varieties of wurst since each region had its own specialties.

For years now, whenever I’ve returned to Germany I’ve sought out a good wurst, accompanied by a glass of the local brew. It’s always been a satisfying experience.

If, like me, you have wurst things on your mind here are four good places for you to enjoy this hotdog doppelgänger. 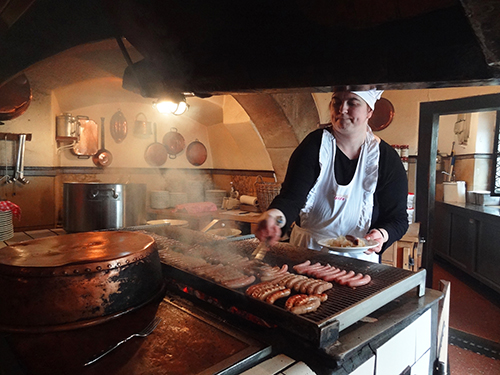 More than 500 years old and reputed to be the oldest wurst house in Germany, if not the entire world, the Historische Wurtsküche is my favorite. I had heard about it and while on a Grand Circle river cruise two years ago (see River Cruising on the “Best in the World” and Cruising on the Great Rivers of Europe) and I headed straight for the Wurtsküche after docking in Regensburg.

It’s a tiny place about the size of a very small house and it sits near the southern end of the city’s Old Stone Bridge that spans the Danube. There’s a small sitting area inside with just tables on one side of it, and more tables on the outside. You can walk right into the kitchen and stand next to the grill and the woman there will take your order and give you wurst right off the grill. Order it with a beer from one of the many local breweries.

I don’t know what it was about Wurtsküche’s wursts, whether it was their special mustard (incredible), the quality of the wurst or the atmosphere ­– probably a combination of all three – but I’d go back there in the snap. 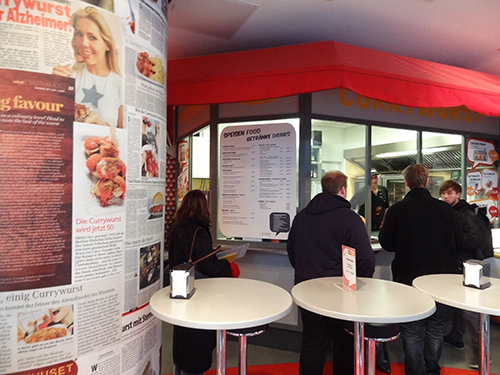 Currywurst is Berlin’s best-loved fast food and it’s so popular some are addicted to it.

Berliners usually cut this sausage into bite-size pieces and smother it in a curry-flavored tomato sauce. Different types of sausages are used for currywurst, although Bratwurst is generally not favored.

You’ll see currywurst being bought at wurst stands as well as on street corners from currywurst men carrying portable stoves. But if you’re going to taste your first currywurst you might as well have it at the Deutsches Currywurst Museum and learn a bit about it as well. It’s very close to Checkpoint Charlie.

Legend has it that sausage-seller Herta Heuwer invented the curry-seasoned topping at her Charlottenburg sausage stand on a rainy day in 1949 when she was experimenting with different ingredients while she was waiting for customers. 10 years later she patented her mixture.

Today it’s become a Berlin icon, usually served with either a roll or French fries on a plastic plate with a plastic fork.

In Munich my wife and I went to the Hofbräuhaus and sat at a table with a mother and her daughter from Texas. They had just returned from a week of skiing in Garmisch and were also making a pilgrimage to the famous beer hall.

I ordered a beer and two Münchner Weisswürste, the original Munich veal sausages that are steamed and come in a little tureen of water. They were much different than any of the other wursts I’ve had in Germany, very good and light-tasting without the grilled taste of other wursts.

You could also have the same wurst at the Augustiner Brewery and Restaurant, another beer hall that is most popular with Müncheners who favor Augustiner beer. We visited Augustiner and found very few tourists and the crowd mostly Germans, which made us want to stay, but we finally opted instead to go to the more-touristy Hofbräuhaus where they had an oom-pah band. Why not go for the full experience, I reasoned. 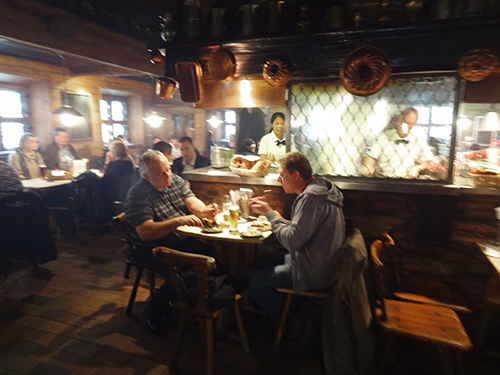 I love Nuremberg’s Bratwursthäusle. When I visited at lunchtime the place was filled with locals and there was a long waiting line. But I was able to get in immediately since I was alone and they had a table with another single diner.

The plate of six sausages with kraut and a beer and one pretzel came to €10.90. They were very good, with a smoky flavor that made them very tasty. The only thing I didn’t like was the mustard, which I found bland as if it was a just-off-the-supermarket-shelf variety.

However, the atmosphere said it all and I had a really great German experience sitting amid a maze of tables with a little bit of smoke in the air from the grilling of the sausages. There was commotion all over the place with frauleins in colorful Dirndls running plates of wurst and steins of beer to all the tables. A great place to go.