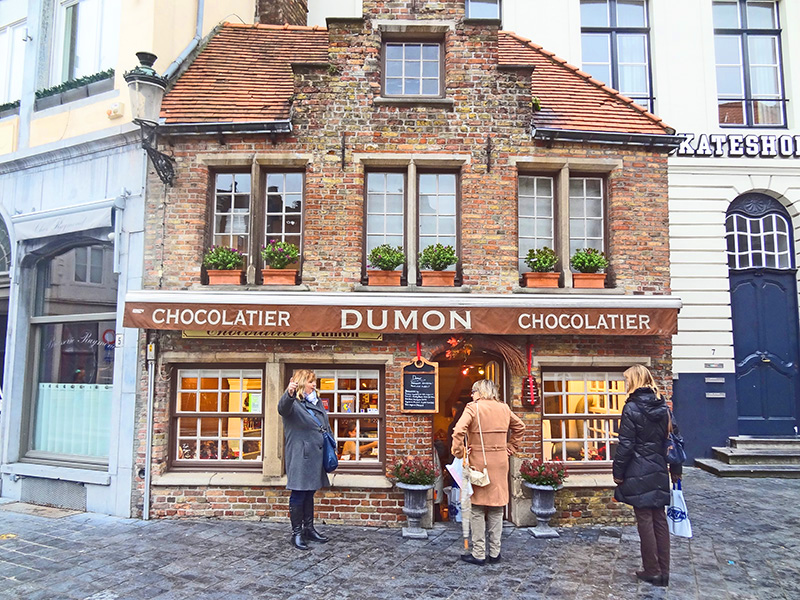 Women searching for the best Belgian chocolate in Bruges

One weekend before I flew home from Europe, I decided to first take the train from Amsterdam to Bruges, Belgium. My goal: to find the best Belgian chocolate in Bruges. (There are also full-day tours of Bruges from Amsterdam).

Why Bruges? Along with it’s famous medieval architecture and canals, it’s also a Belgian chocolate hot spot with an incredible number of chocolatiers and shops, a nirvana for lovers of chocolate.

(I might add that since Belgium is also well known for it’s beers, some enterprising travel companies offer tours that combine the best of both worlds.)

My search, however, turned out to be considerably harder than I envisioned. You can follow it on the interactive map below. 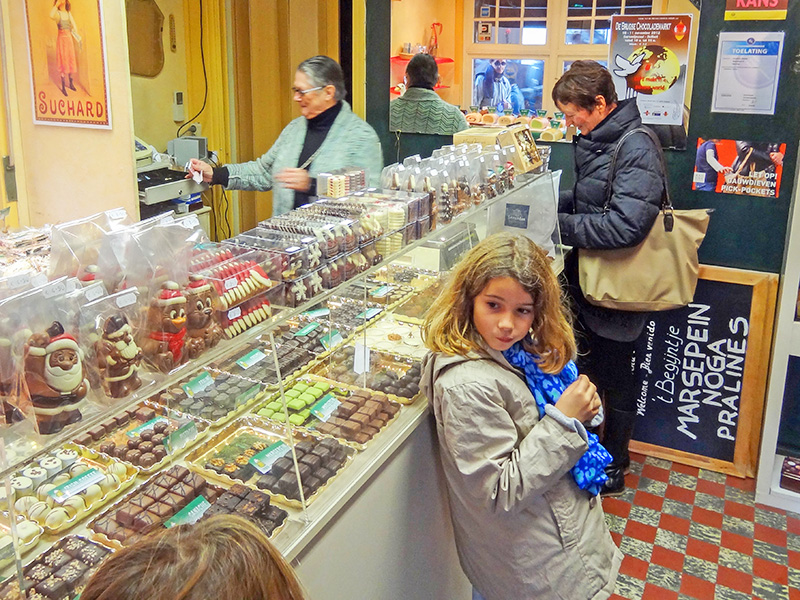 Start With A Plan to Find the Best Chocolate In Bruges

My methodology was quite simple: I looked at recommendations about purveyors of Belgian chocolate in a guidebook or two, and then walked the streets in the central area of the old city where all the chocolatiers were located. A visit along the way to Choco-Story, the city’s interesting Chocolate Museum, helped answer a few questions on every chocoholic’s mind, such as is it an aphrodisiac (perhaps, yes), does it cause high cholesterol (no, it reduces it), does it make you fat (dark chocolate doesn’t), etc.

My first stop was at Dominique Persoone (also know as The Chocolate Line), an attractive little store on Simon Stevinplein across from a little carnival that had been set up in the square. I went in and asked for three Belgian chocolates: one with a cherry liqueur, another with walnuts (it was shaped like a walnut shell on the outside and filled with chocolate with little pieces of walnut) and the third with a biscuit inside (which the saleslady recommended since it was a popular item at their shop). 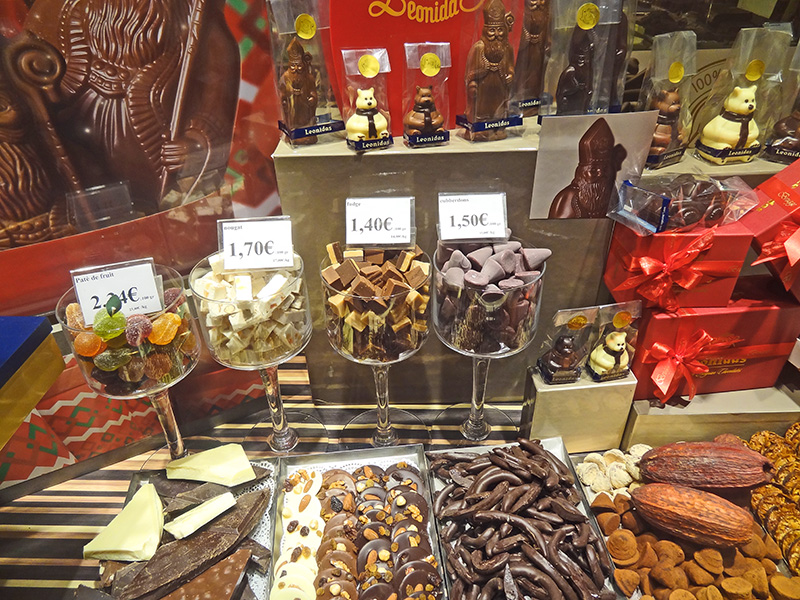 Belgian chocolates in a shop window

The one with the cherry was over the top and the walnut excellent, but I was surprised by the biscuit. For some reason I had expected a tiny cracker inside but it turned out to be crunchy chocolate instead, interesting but not what I had expected. Nevertheless, I rated each well above any other chocolates I had ever tasted.

No, Café Tasse Is Not Run by Nuns

I headed over to Café Tasse, a small Belgian chocolate shop by the Begijnof which lured me in since I misread a sign which I thought said they were associated with the famous Beguine Convent nearby. Inside I found an interesting array of chocolates and bought a Grand Marnier, a Cointreau, an Irish cream and a caramel with nuts as dessert. I was only in the second shop and already liqueur-filled chocolates  seemed to be becoming a theme in my search. 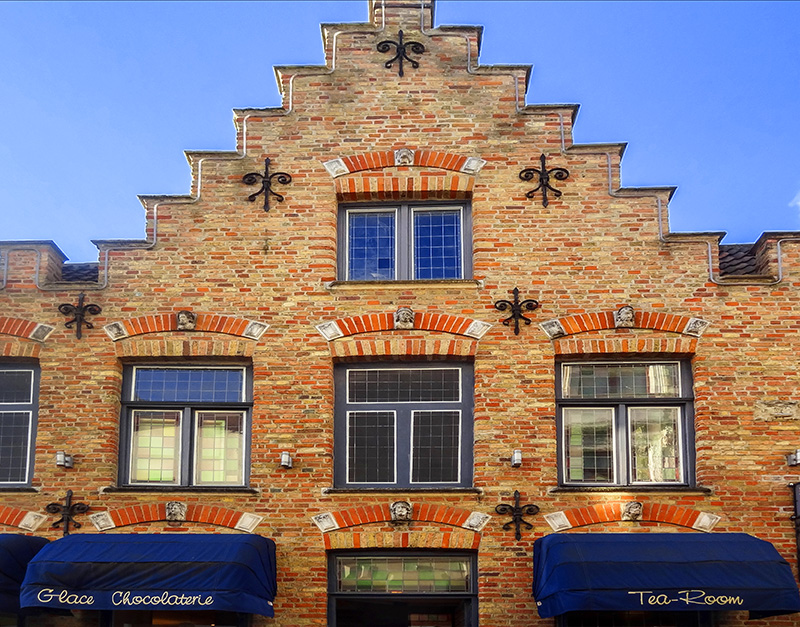 The Cointreau, as it turned out, was very creamy and delicious, but the Grand Marnier left a lot to be desired, namely the taste of Grand Marnier. I wasn’t enthused about the Irish Cream either, probably because I thought it would taste more like Baileys, although the caramel, on the other hand, was quite good. (Note: while updating this post I’ve been unable to verify whether Café Tasse is still open).

Wandering further I came across Detavernier Patisserie, which also incorporates the Tearoom Carpe Diem. It seemed popular and appeared to be doing a brisk Belgian chocolate business. I wandered inside but found that its main business was pastries (it was a Patisserie, after all) so I decided to pass them by. The fact that the super-rich chocolate I was buying, in addition to the occasional free sample, was making me lose my appetite, which probably helped in that decision.

A Map of Bruges: A Walking Tour of Belgian Chocolatiers

This map depicts a walking tour of most of the places mentioned in this article. It is interactive; press +/- to enlarge it or make it smaller. It can also be viewed, and the route followed, on your smartphone.

Around the corner on Katelijnestraat I stumbled across Lady Chocolates, which also seemed popular gauging by the number of people going in and out. But when I saw the promotional signs in the windows – “Belgian Chocolates – Promo Best Price – Best Buy” – I realized its popularity was based on price and decided to pass it by.

Ditto for Daya Chocolates (“1 kg Belgian chocolates for €12.80”), Sukerbuyc Chocolaterie, Verheecke, Brown & Sugar and Moeder Babelutte (despite its chocolate fountain and cups of hot chocolate you could buy there). They all seemed to be targeting the mass market, rather than concentrating their efforts on producing the sublime chocolate I sought. 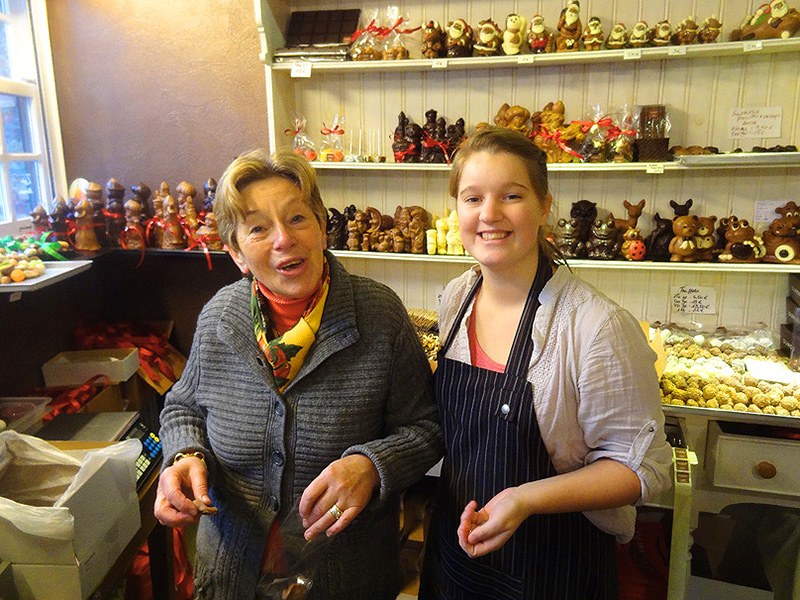 In the family-run Dumon Artisanale Chocolatier

It was the next day when I discovered Dumon. It was in a tiny 400-year-old brick building on the street directly behind Market Square, looking more like a cottage than the chocolate Utopia it turned out to be.

It was here I found the Belgian chocolate for which I’d been searching. The caramel almost made my tongue melt. The cherry (“be careful, it still has the stone inside”) was bursting with a delicious cherry liqueur. The walnut and all the others I tried were superb.

Dumon has been in business only twenty years, which doesn’t seem like a very long time compared to some of the other shops, but its chocolate was far and away the most incredible Belgian chocolate I had tasted in Bruges,  or anywhere for that matter.

And it’s a family operation, with Mom and sister behind the tiny counter, happy to give you samplings of their luscious little masterpieces. The cheerfulness of the whole place only seemed to enhance the pleasure of everything I tasted.

If you’re looking for Dumon, and want to taste the best Belgian chocolate in Bruges, stand in Market Square with your back to the tower and take the street on the upper left. Look for the little shop on your right at the next corner. 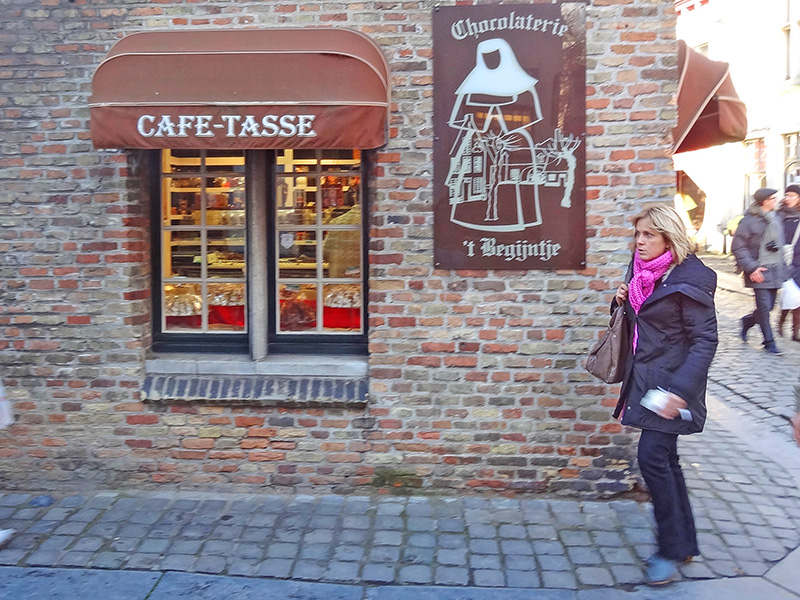 When you tire during your personal search for the best Belgian chocolates in Bruges, you’ll find more than 300 hotels in the city ranging from 5-star properties such as the Hotel Van Cleef, Hotel Prinsenhof, Relais Bourgondisch Cruyce, Relais & Châteaux Hotel Heritage, etc. to many European and American chains including Crowne Plaza, Park Hotel, Belforthotels, Floris Hotels, Martins, and Novotel, among many others.

There are also many apartments, B&Bs, and budget properties. Although the latter are usually not in the center of the Old Town, they aren’t necessarily that far afield. The good Ibis Budget Hotel at the Brugge Centrum Station, where I’ve stayed, is an easy 10-15 walk to Market Square.

You can find some good hotel deals in Bruges on Booking.com and Hotels.com, especially in the off-season.

The Amsterdam to Bruges and Brussels to Bruges Trains

The Amsterdam to Bruges train is a 3 1/2 hour trip. The fare is approximately $59 – $85 depending on class of service. If you’re in Brussels the train ride is only a bit over an hour and costs considerably less – approximately $11 – 16 per person.