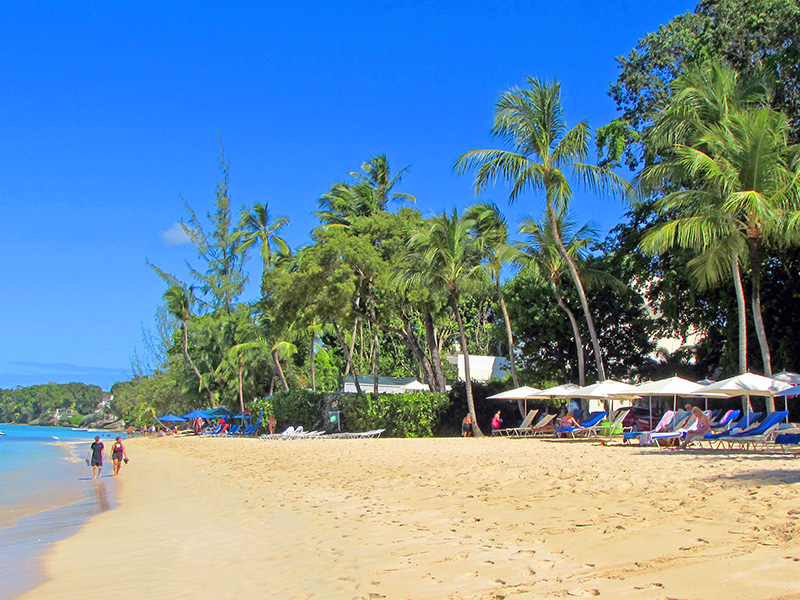 A Barbados feast of seafood. That was a key goal for our Barbados holiday when we visited this delightful southern Caribbean country. And it delivered. Two fins up for Barbados Barracuda, Red Snapper, Flying Fish, King Fish, Mahi Mahi and Sea Cat (Octopus). .

Of course we had other goals as well – a sunny, warm climate, friendly people and excellent accommodation along a soft sand beach. This English speaking, former British colony with a population of less than 300,000 has become a favorite southern destination for winter-weary travelers from the US, Canada and Britain. It’s easy to see why. 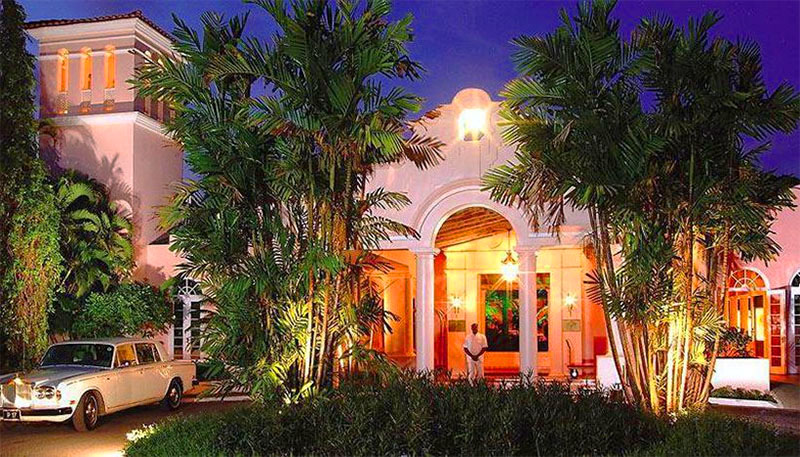 We stayed at the Fairmont Royal Pavilion, one of 75 Canadian-owned luxury properties in 24 countries. This beachfront location with lush landscaping, a former sugar plantation, must be one of its most spectacular. With just 72 spacious rooms in pink-clad, three story buildings the Fairmont is the oldest resort on the west coast of Barbados. 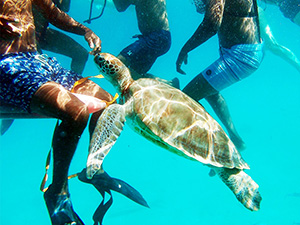 A multi-million dollar restoration and modernization in 2017 has made a fine Barbados resort even better for an island holiday. Every morning it was a treat to slide open the patio doors and be swimming in clear, warm Caribbean waters within 30 seconds.

It was also a special treat to visit a few of the best restaurants in Barbados, some close to our resort hotel. Just a short drive (or twenty minute walk) from the Fairmont, the Fusion Rooftop restaurants is a key tenant of an upscale shopping complex.  With a retractable roof and an innovative interior design featuring a “live wall” and fire pit, the menu is equally imaginative. Our starters were tasty Piri Piri shrimp and Mushroom Baklava followed by the Catch of the Day – perfectly cooked red snapper with yoghurt sauce. Dessert was a decadent Champagne White Chocolate Cheesecake. 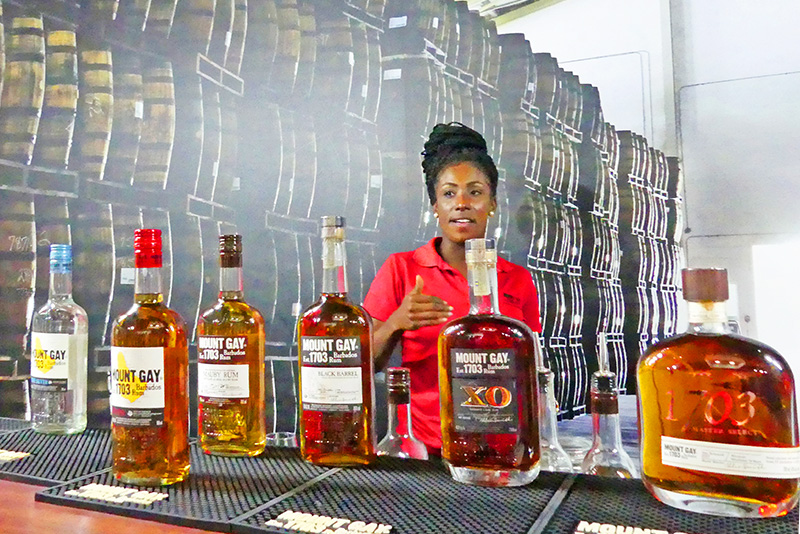 Good food and good rum are intertwined in Barbados history because the Caribbean country is the birthplace of this versatile spirit. Dating back to 1642, sugar cane and rum production has become a major economic driver. Annual Barbados rum exports, from four major island producers and ten well-known brands, total about $US 40 million.

The best known Barbados rum distillery, Mount Gay, is also the oldest continuing rum producer in the world, tracing its roots to 1703. Visitors are welcomed at the distillery for a variety of tours. We chose the Lunch Experience including a guided tour with a film about the history of Mount Gay, a tasting of its various products followed by a traditional buffet lunch with unlimited rum punch.

After driving past fields of sugar cane and some of the more than 1500 small “rum shops” on the island we visited another rum producer with a long history in Barbados. St. Nicholas Abbey, one of only three Jacobean mansions in the Western Hemisphere, dates back to 1660. Set among 225 acres of sugar cane fields, the residence, syrup factory, steam mill and recently installed distillery are all open to the public, including many Barbados vacationers. Tastings of its unique Sugar, Molasses and Single Cask rums are always a treat.

Many restaurants on the island feature rum cocktails and none does it better than the Cocktail Kitchen in St. Lawrence Gap on the south coast. The 2018 Barbados Chef of the Year, Damian Leach, offers a wide variety of unique cocktails and some fine cuisine including remarkably good smoked octopus, pickled bread fruit and parmesan crusted barracuda.

Several good restaurants in Barbados are built right over the water so diners can enjoy the gentle sounds of surf while enjoying their seafood. Hugo’s, on the beachfront in Speightstown, serves wonderful barracuda and sea bass. The Top Deck, just a short walk north of the Fairmont offered fresh red snapper and exceptional desserts (outstanding bread pudding infused with rum). The Atlantis Restaurant, on the open Atlantic side with heavier surf, served excellent flying fish sandwiches and flying fish, three ways. This national dish of Barbados is usually fried with Bajan seasoning and served on a bed of cou cou (corn meal, okra and butter).

On the last evening of our Barbados holiday we enjoyed an upscale Barbados seaside restaurant, this one built on a south shore coral cliff with heavier surf thundering just beneath us. As expected, seafood dominated the creative menu at Champers. To begin we enjoyed an excellent shrimp and mango salad followed by coconut shrimp and a Medley of Seafood – Caribbean lobster, shrimp and king fish. 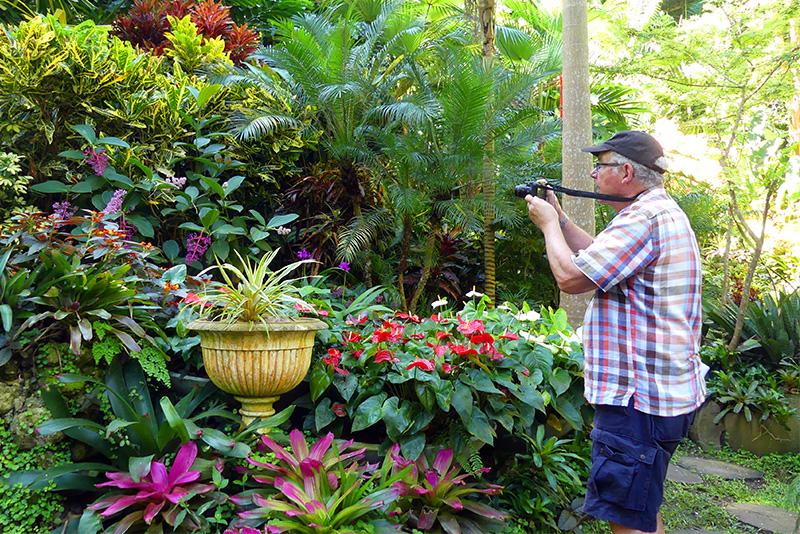 Visiting Huntes Gardens, one of the popular things to do in Barbados

Things to Do in Barbados

Besides eating great seafood, there are plenty of fascinating activities in and around Barbados. One day we joined a Cool Runnings Catamaran for an invigorating sail along the west coast followed by a chance to snorkel among giant sea turtles and over a couple of wrecked ships. 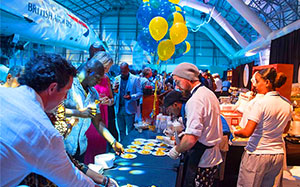 An food event in the hanger of the BA Concorde

For a total change of pace for our island activities, we visited the remarkable Hunte’s Gardens, built in and around an ancient sinkhole by horticulturalist Anthony Hunte. To add to his rain forest masterpiece, Mr. Hunte brought tropical plants from around the world to join 200 year old trees, Asian Buddhas and plenty of benches to sit and enjoy the atmosphere and the quiet classical music. Now in his mid-70s, Mr. Hunte welcomes visitors personally and invites them to his home for lemonade and a chat.

Before leaving Barbados we’d recommend one additional thing to do: spend some extra time at the International Airport to view the only Concorde that had regular service between Britain and Caribbean. A British Airways supersonic jet known as Alpha Echo is stored in a hanger adjacent to the airport. As a fitting end to their Barbados holiday, visitors can learn about the technology that made this aircraft unique and stroll through the narrow-bodied plane to see the creature comforts that made the high cost experience so popular.

John and Sandra Nowlan are travel and food writers based in Halifax, Nova Scotia.