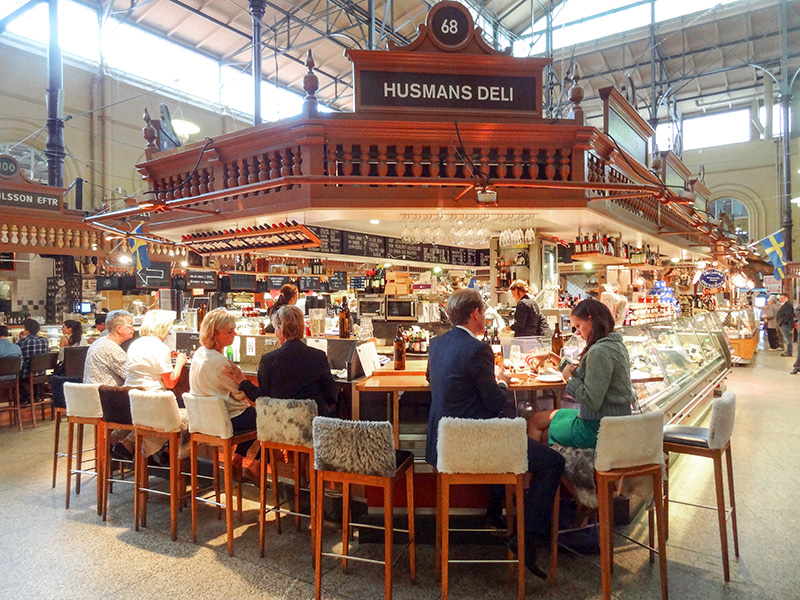 In America grabbing a bite to eat while shopping often means heading to a food court in a mall. Too often we wind up with a greasy burger and fries, or a not-so-enjoyable slice of pizza.

In Europe, however, a bite to eat while shopping can mean dining on delicacies right in the department store itself. Or if not in a store, perhaps enjoying a meal in a food hall.

Whenever I visit a foreign city, I often look for a food hall to get a sense of a city’s cuisine and culture. Some European food halls, such as in Harrods in London, have become destinations unto themselves. At the other end of the Europe’s food-hall spectrum are small food halls. They often serve surprisingly good meals in a market, perhaps right next to the produce stand across from the fishmonger.

The food halls listed below are unlike any we are accustomed to in North America. Each is unique and usually contains several restaurants or cafés where you can enjoy a gourmet meal while you’re out and about.

If you enjoy good food, when you’re in Europe visit some of them and pamper your palate. 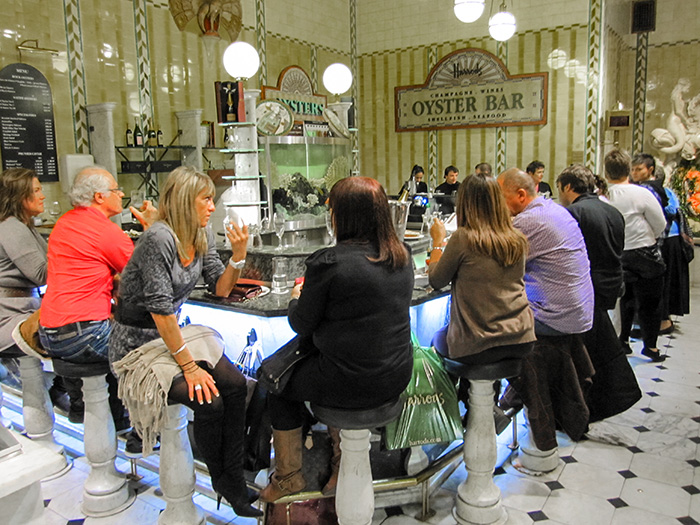 When Harrods first opened its doors nearly two centuries ago, it was a wholesale grocery store that specialized in tea. Today it arguably houses the most famous food hall in the world. With its painted ceilings, ornate display cases and Old World ambiance, it certainly is a feast for the eyes.

But the real feast begins when you sit down in one of its numerous restaurants or bars that serve just about anything you could crave. If you love seafood dine at the Caviar House Seafood Bar, the Oyster Bar or the Sea Grill. If you’re in the mood for meat, head for The Steakhouse. If you’re craving pizza, pull up a chair in the pizzeria…you get the idea. Just don’t look for bargains here, since you’ll be splurging on some of the most delectable foods served in London. 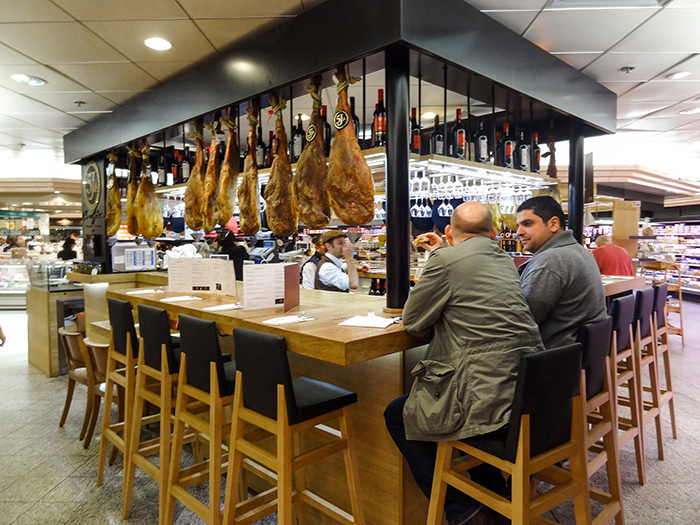 You’re only a block away from the opera when you sit down in the gourmet food hall of Galleries Lafayette. If you’re looking for foodie souvenirs, goods for a picnic or a sit-down lunch or dinner, this is the place.

While most of the shoppers you’ll encounter in Harrods in London are non-English, about 60% percent’s of those in Lafayette’s food halls are Parisian. That’s because the store stocks more than 10,000 gourmet products, most of which are French. You will, however, see high-end goods or delicacies from all over the world.

And when you finally reach that moment when you feel you have to try some of the “merchandise,” step up to one of its tasting bars, place an order at one of its deli’s or sit down in one of its restaurants. It’s a place stocked with a lot of deliciousness. 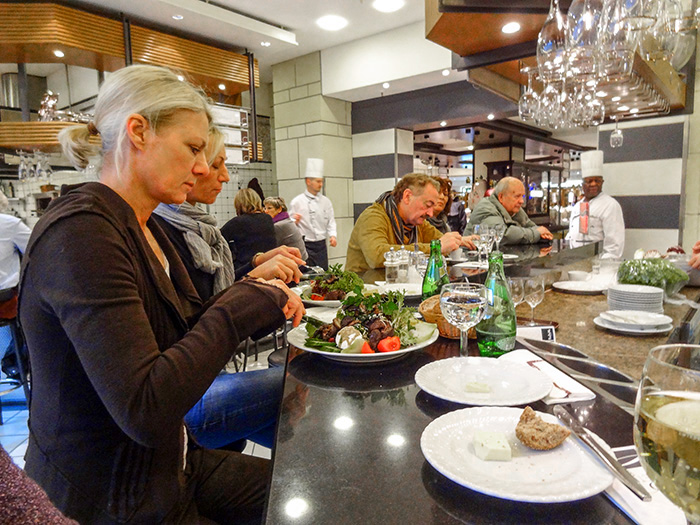 The name KaDeWe is shorthand for Kaufhaus des Westens, and the store is spectacular. In this popular Berlin department store, you’ll find an over-the-top gourmet food hall carrying almost any food you can imagine. But the star of KaDeWe is its specialty restaurants, some of which provide counter service with others serving customers tableside. Here you can have a delicious gourmet lunch or dinner at a cost lower than that at a good restaurant.

Wander around the place and select a restaurant that specializes in the food you love. You’ll find restaurants dedicated to steaks, pasta, bouillabaisse, lamb, pork, seafood and other delectable. Anything you order is prepared before you while you sip a glass of wine, champagne or beer.

But before you settle down to the repast, wander about the huge floor that’s larger than two football fields. There you’ll find 1,300 different varieties of cheeses, 400 different types of bread, thousands of different wines, etc. If you love sausages, you’ll find yourself in heaven here. Among its 1,200 wursts and smoked meats are sausages from every region of Germany. 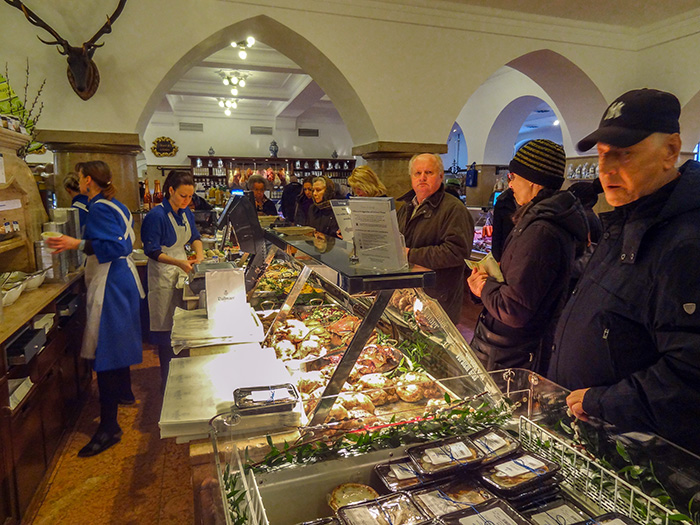 Dallmayr in Munich is a luxury food hall and delicatessen that’s been serving European royalty for more than three centuries. Come here, and you’ll get the royal treatment yourself in Dallmayr’s delicatessen, café-bar or its Michelin-starred restaurant.

Considered one of the city’s premier delicatessens (if not the premier one), you’ll find it in an elegant 19th-century building. You’ll find it right behind the Rathaus (Townhall) on Marienplatz.

Dallmayr carries all sorts of different foods ranging from traditional sausages to exotic fruits and everything in between. Here you’ll find Munich’s most sophisticated consumers, lured by high-quality products such as vine-ripened tomatoes just flown in from Morocco. 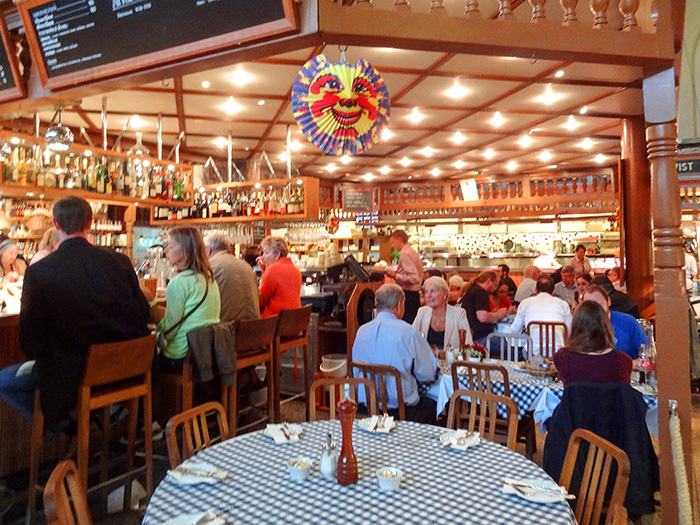 When I first sought out the Östermalm Food Hall I had difficulty finding it in Stockholm’s city’s warren of streets. But once I was able to make my way to it concluded that it was everything I wanted.

Östermalm is a real Old World food hall that’s inside a beautiful medieval brick building. It’s filled with lots of different stands serving gourmet products and is a great place to eat.

Inside it, you’ll find butchers, fishmongers, deli’s and other food purveyors, some of which have little restaurants. Here you’re assured of getting your food from as close to the source as you possibly can. That’s driven home by the moose and reindeer heads hanging above many of the stalls. Although most of the stands and their products are Swedish, you’ll find specialties from other countries, as well.

Visiting it one afternoon I stopped in a little café inside and had a coffee and a slice of delicious lemon-meringue pie. The bill came to 67 Kroner, about $10. The place is so popular it’s crowded even at 3 o’clock in the afternoon.