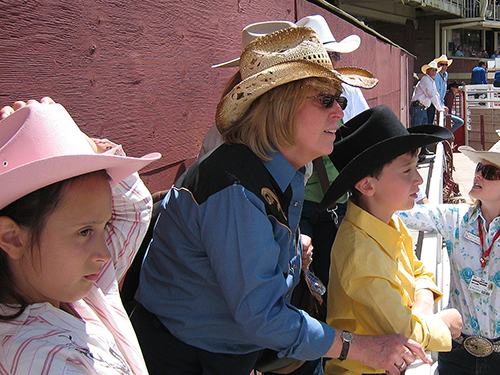 Candy at the Calgary Stampede, while traveling with grandchildren Sami and Mikey

Watching my, nine-year-old granddaughter, Katie, scanning the treeline with her binoculars, as we cruised up the Sarapiqui River in Costa Rica, seemed almost surreal. It is one of the best feelings one can have while traveling with grandchildren.

I’d been to Costa Rica numerous times before, had coauthored a guidebook on the country and written about it often for the special travel sections I did for Audubon magazine.  This was different.  Watching the wonders of the natural world unfold before the eyes of a child brought a whole new perspective to the experience.

In Tune With Nature 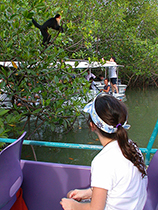 A great blue heron floated over the treetops and alit near a sandy patch between mangroves to peck for morsels in the shallows of the cola-colored river.  A turtle sunned itself on a moss-covered stump protruding near a sandbank by the opposite shore, while a caiman glided out into deeper water.  Jet-black howler monkeys rustled in treetops, dropping nut casings to the floor of the rainforest.  It all felt like an episode on Animal Planet.

Katie lowered the binoculars and flashed her killer smile, as the zodiac swooped into its berth at our lodge deep in Costa Rica’s central valley rainforest.

I had not been keeping score, but obviously all of those firsts had made an impression on Katie, the child of our youngest daughter, Anne-Marie Cappeller, and the oldest grandchild of my wife, Candy, and I.

Providing an Alternative Perspective When Traveling with Grandchildren

The journey to Costa Rica with Katie was Candy’s idea.  I was someone who had written about travel for decades and I had never really lost my sense of wonder, but I had developed some ingrained perspectives on the whole travel experience and, Candy felt traveling with our grandchildren could provide an alternate perspective on the world.  Besides, it would give us an uninterrupted week with her. 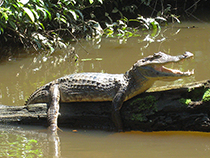 True, watching the keel-billed toucan that bounced from chair-back to table at the al fresco restaurant each morning would have been a delight even to an old hand like me, but the ear-to-ear smile on Katie’s face seemed to acknowledge that these guys weren’t just on Fruit Loops boxes.

“Although it’s been 10 years,” says Katie, now a freshman at the University of Vermont, “I still remember how magical it felt to walk on an active volcano, feed sugar water to bats, and be inches away from monkeys while on a boat tour.  All of the sights and activities were breathtakingly wonderful, but what I remember most about the trip was how appreciative and close I became with my grandparents.”

“So, where are you taking me?”

“So, where are you taking me?” asked Sami, our daughter Lisa Manuzza’s oldest and the next in line to turn nine, when we got back and shared stories and photos of Katie’s experience.  Candy and I looked at each other.  “We’ll come up with something great,” she replied.  We’d have three years to mull it over.

I’d done numerous articles on Canada over the years, including two that had won the Canadian Tourism Commission’s prestigious Northern Lights Award, one of those on the Calgary Stampede, the world-renowned rodeo held each July in this Alberta oil capital.

Since two of our grandchildren, Sami, and Katie’s brother, Michael, each turned nine within three months of each other, we opted for an economy of scale and decided the rodeo would be great fun.  Plus the cousins would get a chance to know each other better, which would be wonderful.

Traveling with Grandchildren to a Rodeo, Ranch and Dinosaur Dig

Travel Alberta, the province’s tourism organization, was extremely helpful, suggesting we follow up our time at the rodeo with a couple of days on a ranch, then head to an area of the province that was one of the world’s premier dinosaur digs. 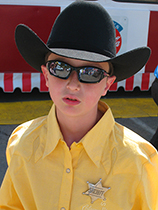 Michael at the Calgary Stampede

It didn’t take much to convince our two grandchildren and their parents to go for this plan.  So off we went to the rodeo, where we did our best (urban)cowboy(girl) impersonations, got into the dressing areas to meet the contestants, then stood directly behind the pens where these maniacal riders risked their bodies atop surging broncos and bulls.  Next were three days at a working ranch where we rode more-docile horses through forested trails and shot the rapids through icy cold waters, then chowed down at the ranch’s mess hall.

We visited the phenomenal dinosaur exhibits at Alberta’s world-class Royal Tyrell Museum, then wandered the badlands of Horseshoe Canyon where millennia of wind and water have sculptured mushroom shaped columns of rock with banded layers of mineral deposits from the Cretaceous Period, some 75 million years ago.  Finally, we couldn’t pass up helicopter rides above it all with Sami, then Michael taking the copilot seat.

“I am 15 now and I can remember that trip like it was last week,” Sami says. “I had the chance to do so many firsts with my grandparents. I overcame my fear and rode my first roller coaster with my cousin. We went backstage at the Calgary Stampede and met some of the famous dancers, cowboys, and bronco riders. I rode my first horse and tried ranch-house food.” 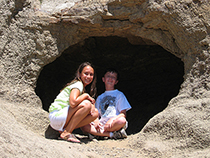 Sami and Mike at the Dinosaur Dig

“Not only was it my first time on a plane, but I also got to experience the thrill of sitting in the front seat of a helicopter,” Michael says.  “We flew over the beautiful canyon and we were communicating through headphones, which was incredible.  The view was priceless.”

For our fourth and final grandchild trip, the destination was never at issue. Calista, Sami’s sister, had been hearing for years about Katie’s trip to Costa Rica and there was no doubt in her mind that she wanted to try some variation on that experience.  Again, the animals really make Costa Rica special for children.

An Invaluable Experience for Grandkids and Grandparents

“My favorite experience was going on the boat ride where Papa showed me all the cool birds and monkeys and a sloth hanging from a tree with her baby,” Cali says. “My grandparents got to know me better and I got to know them better.”

Sure a kid can visit the monkey house at the zoo, but it can’t compare to having a capuchin sip water from a curled up leaf in her hand.

A kid can cringe hearing the mythological horror stories about bats, but until she has felt one’s silky soft wings, then released him into the pitch black night that she understands how important they have been to keeping us from getting even a single mosquito bite within the heart of a steamy rainforest.

You can watch riders bust broncos on TV or play some video game with dinosaurs, but seeing the actual bones protruding from layers of earth that settled into place millions of years ago transforms a game experience into reality.

While the particular destination is not as important as the experience of sharing something special with grandchildren, if you’d like to tailor an experience similar to ours in Costa Rica or Canada you can get very useful information from the organizations listed below.

Note: You will need parents’ permission, in writing, to travel with grandchildren, especially, as in our case, when all of them had last names different from ours.