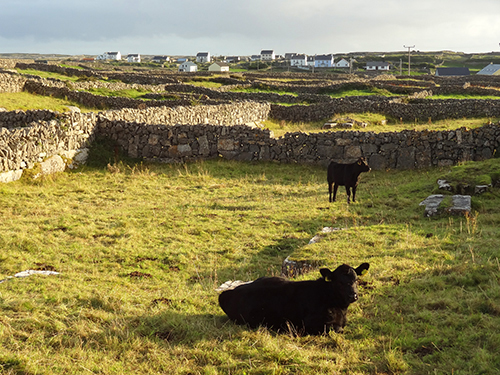 Ever since I was a kid, my young imagination fueled by National Geographic, I wanted to visit the Aran Islands off Ireland’s western coast.

It looked austere and beautifully wild on those glossy pages, but when I arrived by ferry at Kilronan on Inishmore – at 2 miles by 8 miles the largest and most popular of the trio of Arans ­– I found the tiny village Kilronan lush with bushes, trees and ivy climbing over age-old walls.

Pony and trap in Oatquarter

I located a minibus that would take me to my B&B and minutes after setting off the trees and bushes vanished, replaced by a landscape covered with grass, where ribbons of road darted here and there and stone walls ran in every direction across barren hillsides.

“We sometimes have rough seas but not today – it’s only windy,” our driver said to me over his shoulder.

I was a bit surprised since during the hour-long ferry ride from Rossaveal we rolled back and forth several times in the seemingly calm seas and at one point the crew handed out at sea sickness bags. Through it all a group of young German students laughed and cheered as if they were on a carnival ride.

“About 20 days every winter it’s so rough you can’t get on or off the island by boat,” he continued, “and for another 20 you wish you hadn’t.”

It was September and I was glad I had come now, for the crowds, numbering about 2,000 per day in July and August, were gone and the winds of winter, and all they bring, hadn’t yet set in.

I sat back and continued to study the landscape that had now become even more austere, a bright green checkerboard of stonewalls with only an occasional house here and there.

We dropped one couple off at a 200-year-old thatched cottage with a satellite dish attached to the gable before heading on to Beach View House, my B&B in the Oatquarter area where the owner Bridie Conneely awaited me.

Bridie was a lovely looking Irish woman who fit this place so well. She was welcoming and kind, always resdy to get me anything I needed. I later learned she had originally come from the Arans, but had gone to the US where she married and worked for many years, before returning here with her husband, also an islander. Incredibly, they had been married in the same church in New York as my parents.

Now, though, she showed me to my room, which looked out upon that mesmerizing checkerboard. There was a small grouping of houses in the distance and since I was only going to be here for 1½ days, I dropped my bags and set out walking towards them.

I wandered off towards the seaside cliffs, across a huge flat limestone area so barren that little could grow on it. On my way back I walked along a little road and passed a few houses, one of which had a dog walking atop the stonewall in front of it.

All around horses and cows grazed in their little checkerboard pastures. It was all incredibly quiet, not a sound except for the wind and the clip clop of an occasional pony pulling its cart, or traps as they’re called here.

Landscapes often mold one’s personality and I couldn’t help but notice how taciturn some of the island men were. You could hear a car coming from a mile away and after several passed me I realized that their drivers were treating me as a local since all of the other tourists were either on bikes, rented down at the ferry, or in traps.

As they passed each would give me an almost imperceptible nod and from the steering wheel raise his index finger in a little “hello.” Armed with my new status I began getting into the rhythm of the island, walking for hours on end, setting out for any little distant speck that appeared interesting, finding the austerity of the land and the purity of the air wonderfully exuberant.

That evening I asked Bridie for a suggestion as to where to eat, because I hadn’t seen a single restaurant anywhere on my forays. She suggested the Man of Aran Cottage, a restaurant in another B&B about a mile up the road past a little scimitar of beach, set in the house built for the 1931 movie “The Man of Aran.”

It was a charming little place, filled with flowers and overlooking the Atlantic, and as I sipped a glass of wine watched the chef/owner as she collected the makings for my salad from her garden. The fading light was turning the sky gray and peach, and the aroma from a huge near rosemary bush hung in the air. The dinner turned out to be even better than the ambiance.

I set out early the next morning headed up along the coastal road that had intrigued me, and didn’t see a single person for about an hour and a half. Up one road I walked out in a pasture and found the tall grass so soft it was if I was walking on a thick feather comforter.

A shop in Kilmurvey

Not long after a playful brown dog came over and walked along with me for a while. After I saw an old church down the little hillside, we both headed down there, him leading the way. I soon met a man walking his two corgis, who told me that there were seven ancient churches along here and pointed them out to me.

My little friend continued on the road down to the ocean while I headed down to the churches. There I found a scattering of old buildings, all surrounded by graves with tilting tombstones. I was amazed at how well kept it all was, and then saw a sign saying I was National Monument 43, a small church started in the 8th century.

A grave at one of the seven famous churches

I wandered about the rustic cemetery past 100- and 200-year-old tombstones and then found another sign saying “this 9th century cross slab commemorating the “seven Romans” testifies to the fame of Aran schools, which attracted students from the Imperial Rome.”

The silence was soon punctuated by the braying of a distant donkey and as I left the churchyard my canine friend came running back up from the beach to me. About halfway back to Beach View House he ran around a stone wall and across a pasture and a few minutes later I saw him sitting at his master’s door watching me go by.

Late morning breakfast at the cafe in Kilmurvey

Not long after I passed a group of little shops and a café near The Man of Aran Cottage in Kilmurvey, which at 11:30am were just opening for the first tourist-minivans coming up from the ferry. They were the drop-off point for many of the min-vans en route to Dun Aonghusa, a stone fort built by Celtic tribesmen around 2000 BC and now a World Heritage Site. I would have like to have walked about a bit more but needed to head back since Bridie had called a pony and trap to take me back to the ferry that afternoon.

Like Bridie, my trap driver had also been born on the island and went off to work in Boston for some years, before returning. We had a nice chat along the way as he adroitly steered around pedestrians and bicyclists on the narrow road, occasionally calling out to friends in the fields in Gaelic.

Due to their isolation over the centuries, the Arans are still a center of the Gaelic cuture and language, and during the summer months students come here to study. When they leave I’m certain they hope, as I did, that the seas will be smooth and the memories long-lasting.